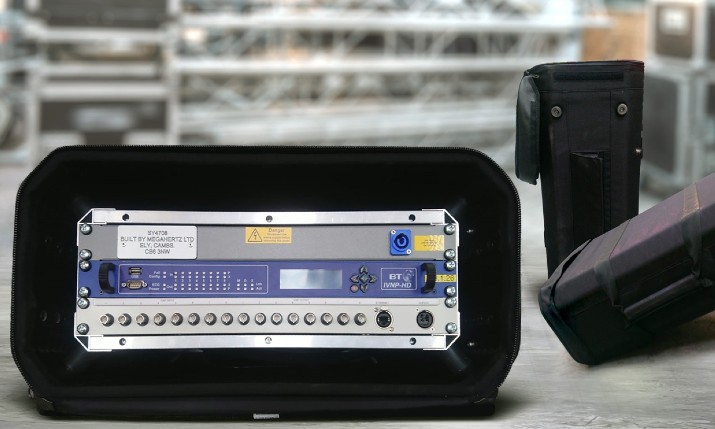 A broad range of output and formats is supported by Flightcase

BT Media and Broadcast has announced Flightcase, a highly portable outside broadcasting (OB) solution that enables the production of live feeds from a single case.

Weighing just 25kg, the plug-and-play solution is said to remove the need for an OB vehicle in certain scenarios and is claimed to be the perfect tool for delivering live tier 2 and 3 events domestically and internationally.

Able to produce a broad range of output and formats, Flightcase is capable of different combinations of J2K visions on 1Gb circuits, such as J2K at 150Mbps, facilitating the delivery of 5x TX and 3x RX feeds. Additionally, it can provision data of up to 100Mbps, while the next generation of  integrated software-defined network equipment, which is already in development, will enable up to 32 visions on 1+0.

Flightcase has already proven itself in the field, with BT claiming that it was used to deliver part of the Brexit coverage earlier in the year. The company has also said that the technology plays a crucial role in delivering feeds to Telegenic’s Remote Operating Centre (ROC), enabling remote coverage of the Premier League and Rugby Premiership, most notably.

Dominik Wrona, senior live broadcast portfolio manager at BT Media and Broadcast, said: “Flightcase brings cost efficiency and portability to outside broadcasting, which traditionally has required a number of engineers and supporting infrastructure. With the ability to be operated by a single individual or remotely managed, live feeds can be brought to screens simply. We’re excited to see how it encourages creativity in workflows.

“Our next phase of software-defined Flightcases will also lead to increased creative capability from existing and new content producers. However, most importantly, it also helps us deliver our ambitions of being an environmentally sustainable organisation, whilst we keep striving to deliver the best media experience to billions globally. These sort of developments allow our customers the flexibility and agility that’s expected from their partners.”

The solution will support BT Media and Broadcast’s remodelled commercial packages. Available across three levels – platinum, gold and silver – customers are provided with enhanced access to BT’s portfolio based on their requirements, such as fibre, satellite or microwave delivery, levels of compression, resilience and content protection tools including BISS CA encryption. Flightcase will at first be available on the silver package, enabling users to broadcast HD feeds via fibre delivery. Further variations of the solution will result in uplift of services and redundancy, expanding the offering into different tiers of the new commercial packages available.