Sky Deutschland: why 14, 7 and 3 are the magic numbers

The team at Sky Deutschland had only eight months to establish workflows and guarantee the level of expertise required to produce and broadcast fresh sports and news content 19 hours per day. “It was a very exciting [time] and the environment [was] limitless,” reflects Francesco Donato, vice-president of broadcast operations. Sky Deutschland. 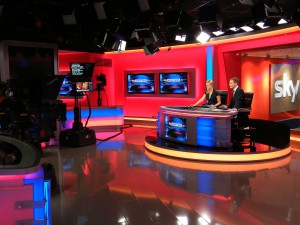 With this project, adds Donato, “we have been able to freely apply our teorema [core approach] to create an efficient and powerful system for the German Sky, which currently airs 70 channels with more than 40 in high definition. The initial brief was to create news and sport stories with the highest quality and freshness, so to perform as specified around 160 people were employed, including about 100 journalists as well as the technical and production staff required to create and broadcast content to feed the linear and multimedia platforms.”

One of the primary objectives as the project got underway was the development of a revolutionary production system capable of offering journalists the freedom to control any aspect of the editorial cycle and to steer the production process.

Accordingly, the solution deployed for Sky Deutschland’s new service makes the most of advanced technology and staff expertise. It has been based around systems which utilise approximately 500 templates, representing all elements of the show.

Primary technology suppliers include Vizrt, which provided the real-time graphic content creation and delivery platform that works in conjunction with graphics templates from Reality Check. A Mosart-delivered system drives the fully automated studio environment as well as controlling all the devices which are typically installed into an audio/video gallery, including audio and vision mixers. The result is that almost all the devices are driven from the playlist of the shows, which is refreshed every 30 minutes. In addition, Avid provided its Newsroom solution, play-out devices and post-production environment.

It is possible to witness the result of these choices by simply entering the Gallery, where you will find two control room operators and one journalist managing the studio playout through standard PC and a dedicated graphical user interface – without the need to reach for typical broadcast devices. Thanks to this solution, the production processes have become more rapid and yielded an increase in the quality of the on-air product.

Finally, thanks to the optimisation of human participation in the editorial and production processes, Sky has been able to reallocate operational budget in favour of SNG, ENG and live sports contribution activities with a view to ensuring that news bulletins are as fresh and content-rich as possible.