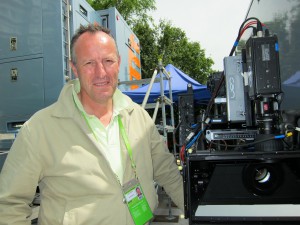 Duncan Humphreys of CAN Communicate with one of the 3D rigs that will be used at Wimbledon.

Wimbledon’s 3D coverage will once again have Sony, CAN Communicate, and Visions working hard on the production, and this year they have made the move to a completely tapeless workflow courtesy of the Sony SR-R1 HDCAM SR recorder and a Sony TD300 camcorder. 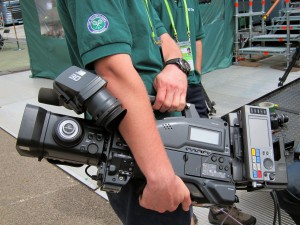 A Sony TD300 is making its debut at Wimbledon for the 3D broadcast.

The TD300 is the other big new change, being used to get shots around the Wimbledon grounds and also to replace camera four for coverage during matches.

“That position is restricted in terms of space so the TD300 replaces a rig and makes the camera position far more flexible,” adds Humphreys.

The tapeless workflow also extends inside the Visions Gemini OB unit as the SR memory cards are coupled with a new Sony deck in the Visions Gemini OB unit that does the job of four HDCAM SRW5800 decks, thanks to four SR memory card slots. It can record on up to four cards simultaneously and also has a three record, one playout mode. The deck will primarily be used to record matches so that they no longer need to be archived on HDCAM tapes.

Like last year the production will rely on six native 3D rigs from Element Technica: two Pulsar rigs, three Quasar rigs, and a mini-locked off rig that was located about eight feet off the ground on a wall behind a corner of the court.

Five broadcasters will take the feed this year beginning next Wednesday and concluding with the Men’s Final on July 8: BBC, ESPN, Canal+ Spain, Nova (Greece), and Sky Italia. ESPN is also enhancing its 3D coverage with interviews and analysis shot from its own 3D standup position on the Media Garden Deck.

“We can stylise and add some personality to the world feed package,” says Jamie Reynolds, ESPN, VP of event production. An ESPN-dedicated EVS unit in the Visions OB unit will allow shots from the standup position to be cut into the 3D broadcast as desired.

“Everything went pretty smoothly last year and we don’t envision any issues this year,” says Duncan of the efforts that have already begun with set-up and camera rigging.

One final change that may have an impact on the 3D viewing experience is that only the Men’s Final will be delivered to cinemas in 3D.

“We don’t have as much delivery to cinemas so we can dial up the wick a bit on 3D because we won’t be constrained by the big screen,” explains Humphreys. “A one-centimeter gap between the left and right eye on a 47-inch screen may be acceptable but on a cinema screen that centimeter multiplies out and could be a foot or two. So the viewer’s eyes can start to struggle with that.”