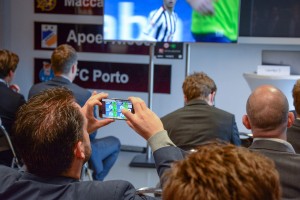 Showcasing the new solution on match day at the Commerzbank-Arena, Frankfurt.

The Bundesliga match between Eintracht Frankfurt and VfL Wolfsburg on 6 May may come to be seen as a milestone in the development of virtual advertising technology in sport. Ahead of this match, ADI and Supponor, with the support of Lagardère Sports, installed a full TV arc Virtual Hybrid perimeter digiBOARD system, showcasing virtual replacement technology for a range of stakeholders, including Bundesliga clubs, governing bodies and broadcasters.

The system is the product of over two years of development, combining perimeter LED technology from ADI with Supponor’s industry-leading augmented reality solution. ADI’s perimeter systems are used by the majority of clubs in the Premier League, whilst Supponor’s technology is used in Spain’s La Liga at every Real Madrid and Barcelona away match. Virtual Hybrid digiBOARD achieves the best of both technologies by keeping dynamic LED content in the stadium, whilst having the ability to deliver broadcast quality virtual replacement with regionalised messaging for different audiences around the world.

The showcase event in Frankfurt was the climax of a major tour in which ADI and Supponor took the technology on the road, allowing clubs throughout the Bundesliga to get ‘hands on’ with the system and understand how it works.

Philipp Hasenbein, managing director of Lagardère Sports Germany, who hosted the event in Frankfurt commented: “The success of the roadshow demonstrated the huge interest of the clubs in virtual replacement advertising. Following the showcase, we are now convinced of the market

readiness of the technology in real game conditions. As a sports rights agency, with a global network, we are ready to bring virtual advertising to the Bundesliga – from the technology, to advising clubs and sponsors on commercial activation and implementation in the stadium.” 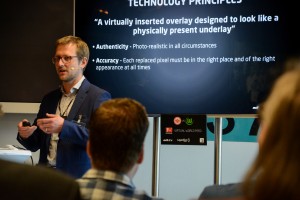 The successful deployment of Supponor and ADI’s solution at Eintracht Frankfurt’s Commerzbank- Arena followed an earlier smaller scale integration of a Virtual Hybrid digiBOARD system at VfL Wolfsburg’s Volkswagen Arena in March 2017. The purpose of both events was to demonstrate not only the quality of the product on screen but also the complete end-to-end workflow, from integration with the live match feed production to the generation of multiple customised feeds featuring different perimeter brand messaging in each.

Geraint Williams, CEO of ADI, who presented the technology at the showcase added: “We’re delighted by the response from clubs and federations who have seen the technology in action and incredibly excited by some of the progressive thinking they’ve shared about the potential for commercialising the platform. The solution we’ve developed with Supponor is a complete end-to-end offering, which combines the best of everything we do, from LED manufacturing, augmented reality, connected stadium networks, content management, and broadcast engineering.”

Supponor’s Chief Operating Officer, Charlie Marshall, who also gave a keynote address at the event, commented: “The showcase event at Eintracht Frankfurt’s Commerzbank Arena was a hugely valuable demonstration of Supponor’s virtual replacement technology and its ability to integrate with LED. We were able to successfully demonstrate the end to end quality of the solution, both in terms of authenticity on screen, and the seamless technical workflow. We are at the dawn of a new era in virtual replacement advertising and we’re excited to be at the heart of it as we further implement the solution in key markets.”

ADI and Supponor will head to the UK and other European markets in May and June to showcase the technology on the next leg of the tour.

A more in-depth article article about the match, prepared by regular SVG Europe correspondent Birgit Heidsiek, will appear on the SVG Europe website later this week.