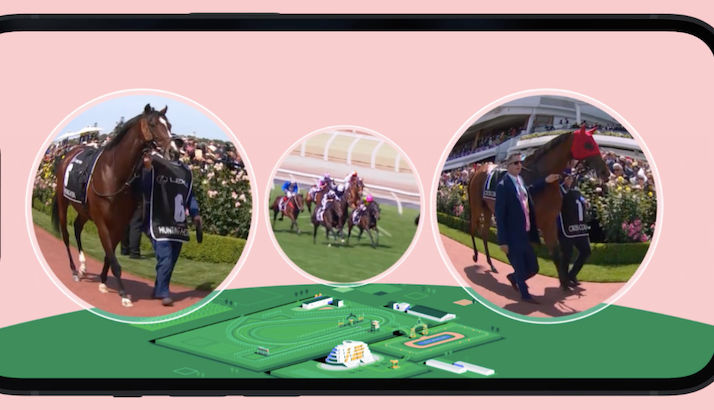 Aura, a new streaming platform built by an Australian immersive technology company also named Aura, presents interactive live content in a video-game-style format across mobile, web and various connected TV standards. Its interface allows users to seamlessly switch between a 2D linear feed and a 3D extended environment populated with a range of features that allow the user to interact and engage with content in a more captivating way.

For the 2021 Melbourne Cup Carnival, Aura created a 3D version of Victoria Racing Club’s Flemington Racecourse, where the event took place, with racing enthusiasts able to navigate back and forth between nine live feeds. This included two track-side 360-degree camera feeds and seven fixed camera feeds showing live races, interviews, celebrity promos and other shoulder programming. MIMiC Transmission handled the low-latency delivery of all fixed camera feeds to the Aura platform, ensuring fans worldwide were able to use the platform to enjoy race day in real time.

“The Lexus Melbourne Cup is a high point on the Australian sporting calendar and is enjoyed by millions of viewers globally every year,” said Antony Arena, chief executive officer of Aura. “Pulling off a never-before-seen interactive experience for the 2021 Carnival with the support of our transmission partners at The Switch was a momentous occasion for us – demonstrating the full capabilities of the Aura platform by bringing an incredibly dynamic and immersive race-day experience to viewers worldwide.”

He added: “Our platform is unique in that it’s a streaming service built on a video game engine, enabling us to redefine the way live events are enjoyed. Being able to rely on The Switch’s deep live sports experience and its leading-edge cloud transmission service played a big part in enabling us to seamlessly deliver a unique race day for viewers around the world. This project was a milestone moment for us and an incredibly exciting glimpse into the interactive future of live sports.”

MIMiC Transmission provided low-latency IP delivery of multiple feeds from the Flemington Racecourse directly to the Aura Platform via the internet and The Switch’s private network. In the Aura platform, users were able to curate their own viewing experience by selecting multiple camera angles, while engaging with interactive content such as live racing data, jockey stats, racecourse weather conditions and social media conversations.

Nicholas Castaneda, senior vice president, sales at The Switch, noted: “Aura’s landmark live coverage of the 2021 Melbourne Cup Carnival provides a great window into what can be achieved today in live sports streaming. We’re incredibly proud to have worked with Aura to bring all the anticipation and excitement around this year’s Lexus Melbourne Cup to spectators worldwide through its unique and engaging platform. As the uses and capabilities of Aura continue to grow, we look forward to continuing our collaboration in delivering outstanding interactive live event experiences.”

Aura’s Melbourne Cup Carnival coverage reached racing enthusiasts worldwide, including viewers in China, France, Ireland, Japan, New Zealand, Saudi Arabia, Singapore, the United Arab Emirates, the UK and the US. The company also made available a replay function, which made footage from all seven fixed camera feeds available to viewers with five minutes of the race ending. All live feeds were monitored by The Switch’s 24/7 New York Network Operations Centre.