Autogyro gives Beyond HD a Dynamic Perspective on sports coverage 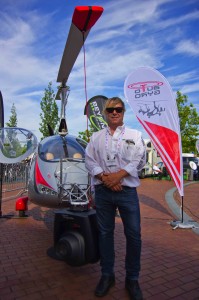 A new alternative to aerial filming using drones, with their regulatory limitations, or helicopters, with their high costs, has been launched in the UK — and is being aimed at sports productions. It uses a small gyrocopter, which sends no power to the rotors (so it always needs forward motion), but it can go much more slowly than a fixed wing aircraft (25 knots/46kph), and if you go below that you just start to descend, slowly. “The benefit of that is it makes it very safe at low speeds,” said Keith Harding, CEO, Beyond HD, which is the first company in the UK with a fully certified Autogyro for aerial filming.

Harding has partnered with Dynamic Perspective, of Austria, “because we needed a very high quality five-axis gimbal that was light enough to go on this very small aircraft.”

The DynaX5 gimbal weighs 17kg, when empty, which allows it take a wide range of cameras, including the company’s own Arri Alexa Mini or Red Epic Dragon 6K cameras with cine-type lenses up to 300mm (restricted by the size of the gimbal), or broadcast cameras such as Sony’s P1 with a zoom lens for live use.

They have also developed a custom retractable mount, so that the gimbal can be brought up for take off and landing, but can be lowered to give the camera a full, unrestricted 360º view under the aircraft.

The service launched this Summer, and has since been mainly working with sports broadcasters doing trials. Harding believes it is ideal for filming touring sports, such as cycling or rallying. It can track at more than 190kph, making it useful for car racing. Over the next few months it is likely to be used for motor racing and yachting.

Beyond HD also operates drones, “but they are heavily regulated and limited on distance from the operator,” and have battery limits, he said. However, the company is also introducing a tethered UAV for live broadcast use. This will have a drone permanently tethered to the ground, providing better security and safety, plus unlimited flight times.

It is using the DJI Matrice M600 UAV, which is tethered using a new system, based on military technology, developed by a French company, Elistair. “We need a lot of amps, which typically means thick cable,” explained Harding. The tethering box converts the amps into high voltage, but lower amps, “so you can get all the power up to the aircraft on a Kevlar cable 1mm in diameter.”

It not only supplies power, but also data and controls the movement from a safety point of view. “We are no longer restricted by battery power,” he added. The system is just about to start testing, and will use wireless systems for video transmission.

Harding believes the Autogyro Cavalon Pro is ideal “where the budget doesn’t fit a full-size helicopter and were a drone can’t be used because of regulations.” It also has a maximum flight time of three hours, so it can stay in the air for longer than most helicopters

“It is very cost effective, between 1/6 and 1/4 of the operational costs of a small helicopter, and can fly in the same air space as a single-engine helicopter.” It burns about 23 litres of regular unleaded, but a helicopter could use 10 to 15 times more.

Beyond HD also runs various types of camera vehicles, including an electric all-terrain buggy for off road (or indoors without fumes) stabilised use at speeds of up to 56kph, using the DynaX5, which is also used on its Porsche Cayenne high-speed camera car.