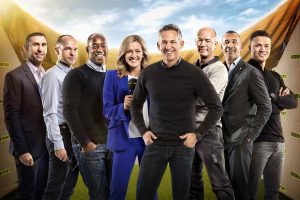 Match Of The Day (MOTD) – the UK’s most watched football show — returns to BBC One on Saturday 12 August, signalling a new season that begins with a milestone for the Premier League – its 25th anniversary – and concludes with the 2018 FIFA World Cup in Russia.

“We will be celebrating a quarter of a century of the Premier League with a re-run of the first match and first Premier League era Match of the Day from 15 August 1992 on the BBC Sport website and Red Button,” explains Steve Rudge, Lead Executive of Football, BBC Sport. “The match featuring the first Premier League goal, Sheffield United v Manchester United, will be replayed in its entirety with live text commentary and goal-flashes from the 3pm kick-offs from 1992.”

Rudge reveals that the BBC is delivering a new and refreshed brand identity for BBC Sport which can be seen on TV for the first time during the football programming airing over the opening weekend of the Premier League season. The new brand will have a more harmonised look for all of BBC Sport output across all platforms. This means that MOTD will have new graphics, AR and a small refresh to the Salford studio to fit in line with the new brand.

“We will use a combination of Motion Analysis which is the camera tracking system and Vizrt which is the graphics rendering engine. They are two separate systems but work as a perfect partnership to provide our Augmented Reality.”

He goes on, “During the season, we will be producing seven weekly football shows on BBC TV. That means reaching more than 36 million people. What’s more, 60 per cent of all Premier League viewers only watch on BBC.”

The Premier League highlights form just a part of the BBC’s football rights portfolio. Other elements include live FA Cup coverage until 2021, the FIFA World Cup through to 2022, and regular women’s football, including live coverage of the Women’s FA Cup final on 5 May 2018. Beyond that, as the England Women’s team begin their campaign to become world champions, home qualifying matches of the 2019 Women’s World Cup will be televised from 19 September, with matches against Russia, Bosnia, Kazakhstan and Wales.

Alongside the flagship MOTD. other shows returning in the coming days are MOTD2, MOTD2 Extra, Football Focus, Final Score, The Premier League and, for young viewers, MOTD Kickabout on CBBC. All football programming will feature the new-look BBC Sport brand identity, with the addition of a new touchscreen appearing in many shows.

Rudge goes on to say that every show will be available on the BBC iPlayer – a platform that received more than 50 million requests last season for Premier League and FA Cup programmes. In fact, Rudge says that there will be a wealth of extra digital content during the 2017-18 season.

“More than previously possible, the BBC Sport website and App will enable us to provide extensive 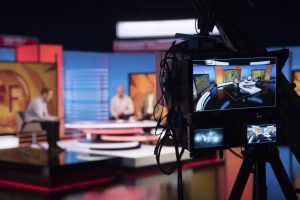 He goes on, “Our coverage of the new FA Cup season launched last weekend when, in a broadcasting first, a preliminary match was broadcast live on the BBC Sport website and app. That coverage will continue with the BBC streaming other games from the qualifying rounds for the FA Cup and we hope to introduce Video Assistant Referee (VAR) from the third round in conjunction with the Football Association. For those games that are streamed, the plan is to use remote production, but we will be on site for the live TV games.”

Rudge continues, “Although we have not yet used remote production for live football we do appreciate the benefits of increasing efficiency and delivering cost savings. We look to do this by using technical facilities — in particular galleries and post production — which we have available in Salford, across multiple sports without having to hire bespoke OB trucks for match coverage. Any savings that can be made by not duplicating spend means we can invest more in the output.” 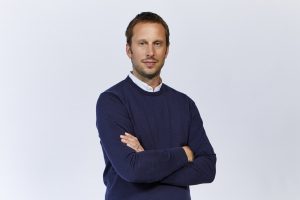 He says the plans call for the use of new technology to stream a variety of live sport to the audience which might not have been previously possible. “Using a remote gallery allows us, for example, to make all of the Triathlon Championship races available to the audience from across the world, without having to set up bespoke OBs which we wouldn’t be able to afford. As mentioned earlier, remote access technology has also enabled us to stream matches from the preliminary rounds of the FA Cup.

“On the downside, though, we have a limited number of galleries in Salford which in turn restricts how many matches we can manage. Remote working can also limit the access to talent, athletes and fans, so we have to ensure we can portray the colour and atmosphere of the sport event and not just show the match footage.”

He concludes, “Of course, as soon as the season draws to a close here in the UK, we will be looking to Russia and the 2018 FIFA World Cup. At this stage, the planning for the match coverage is at a very early stage, but I can say the BBC will again be at the heart of the action bringing unparalleled access to all rounds of the tournament across TV, radio and digital platforms. It all starts with the World Cup draw on 1 December live on the BBC. All in all, the 2017-18 season is going to be an exciting one for football fans and the BBC.”