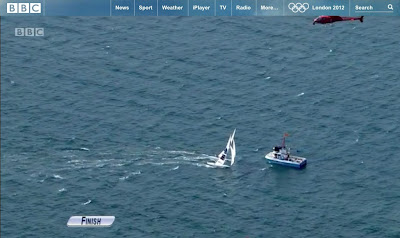 With the Olympics well under way at the various Olympic Park venues, more than 100 miles away on the South Coast, Weymouth is hosting the sailing. And, uniquely for these Games, the BBC is using an independent production company, Sunset + Vine,  to produce its unilateral add-on to the OBS feed from the boats.

Various events so far (the road cycling comes to mind) have shown the wisdom of turning to expertise in specialist sports, and Sunset + Vine has produced the BBC’s sailing coverage for the last dozen years. So, when the BBC put producing its own coverage of the events down in Weymouth out to competitive tender, it was little surprise that Sunset won the gig.

Featuring 10 events over 13 days, the sailing is an important part of the BBC coverage, as befits an island nation. “The BBC only has got three OBs in the entire Olympics,” explains Andrew Preece, Sunset + Vine, executive producer. “One is out the back of the stadium, one is at the IBC, and the other is at Weymouth for the sailing. So it’s a fairly substantial commitment from them.”

Sunset is using a team of 23 people working on flyaway kit and based in a couple of portable cabins in the broadcast compound. “We have a bunch of OBS feeds coming in,” says Preece. “We have the world feed and some unilateral in from them; then we’ve got two of our own cameras for shooting presenter links and features, etc.”

“We’ve also engaged Omega to provide us with 3D animation capability in our gallery, which means we can create our own animations based on data coming from the race course,” adds Preece. “That hasn’t been done before, and it means we can switch to any of the five courses to catch up on the British interest, potentially with our own camera.”

Apart from the traditional vagaries of the British weather, Preece says, the team faces two main challenges when it comes to sailing: getting a steady picture (which the Cineflexes, of course, help with massively) and getting close to the race course. “RF can be a problem in keeping it stable, but we’ve never had a problem with range,” he says. “We’ve got two paths of fibre coming in from the top of castle on the hill back to the broadcast compound, so our receive points are nice and high up. But the main thing is, it’s not a stadium sport where you know where the edge of the pitch is,” he says. “It’s not that simple!”