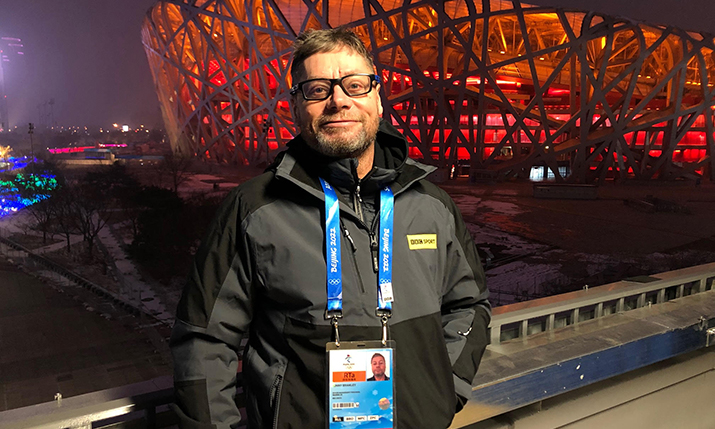 BBC Sport is raring to go for the start of the Beijing Winter Olympics Games, which is fast approaching.

The public service broadcaster has been cooperating with fellow rights holder Discovery to ensure each network provides viewers with the best offering, says Jonny Bramley, executive producer for major events at BBC Sport, speaking to SVG Europe from Beijing. “We’ve basically got two live feeds under the Discovery deal. It’s the same deal [as we had in Tokyo]. What we’ve actively been doing is making sure that we’re in an open discussion with Eurosport about our schedules so that we’re not directly competing against each other.

“Eurosport have got a very good winter sports offering,” continues Bramley. “They’ll show a lot of the Nordic events; that that’s quite regular for them. If they’re showing some of those Nordic events we will be able to show something different, thinking about the viewer across both networks, basically.”

Slaloming through the obstacles

Despite issues with freight being delivered into China as the Port of Tianjin was completely shut down when a COVID case was discovered, which delayed proceedings, Canadian company Broadcast Services International (BSI), which is carrying out the installation for the broadcaster, is doing, “very well” and has got BBC Sport “right back on track,” says Bramley.

“We’ve tried to scale back some of our onsite operation from the couple of Winter Olympics, just because of some of the uncertainties around operating out here in China, and just some of the logistics, you know, getting around venues”

The advance of the COVID variant has not changed things drastically for people working on the ground for BBC Sport, as says Bramley, “everything’s really tight in China and it’s been a zero COVID tolerance place for a while, so [Omicron] didn’t make the slightest bit of difference. Everything was really strict anyway, quarantine was three weeks up until recently for anybody coming into the country, and because we’ve got this closed loop system, COVID is supposed to be completely eliminated within that.

“The closed-loop effectively closes us off from the public and the rest of Beijing. Even within the closed-loop we’ve got strict measures, so we have one-metre distancing, masks to be worn at all times unless you’re physically eating or drinking, and the same thing applies in the hotel, so it’s pretty strict.” 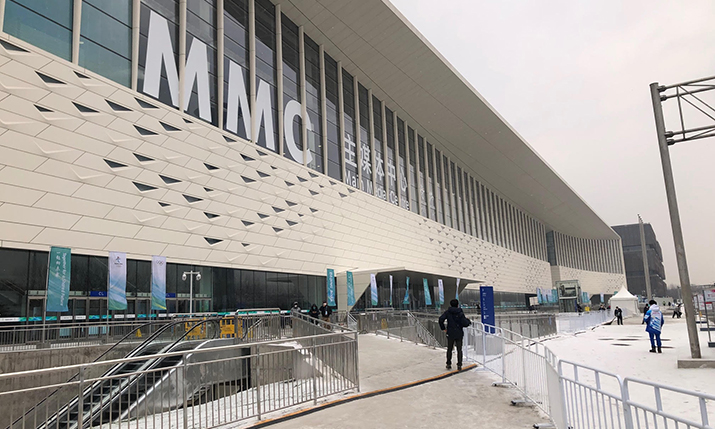 The IBC is part of the newly built Main Media Centre (MMC) facility in Beijing, adjacent to the existing China National Convention Centre that was home to the media during the Beijing Olympic Games 2008. The MMC is within walking distance of the National Stadium, National Aquatics Center and the National Indoor Stadium, three legacy venues from the 2008 Olympic Games that have been renovated to host the Ceremonies and ice sports competitions during the 2022 Winter Olympics

Unfortunately, this closed-loop means that broadcasters are not able to get around the city to get local colour to give viewers at home a taste of where the Games are being held. However, host broadcaster Olympic Broadcasting Services (OBS), working with the Chinese Olympic Committee, is providing footage including B-roll of the city, country, cultural events and aerial drone shots of the venues for broadcasters to use.

Adds Bramley: “At least in Tokyo, once you went through a two week quarantine period you were free to actually go out into the city and film. This is very different in the fact that you literally can only go between your accommodation and the Olympic venues. So OBS and the organising committee have released footage. We are able to use that to get a flavour of the place. Also, we’ll certainly do what we can in the venues themselves.”

While several asymptomatic people from broadcasters have tested positive for COVID on arrival in China and are still in quarantine, Bramley believes this is because of the rash of booster vaccines given over December in the UK, and that the Chinese testing kit is more sensitive. This has also caused issues for the broadcasters, who do not have surplus staff at hand to replace those in quarantine.

Bramley explains: “It is just not viable to fly extra [people in] just in the event that they might be needed; you can’t really justify that economically and we’ve also got a limited number of accreditations.”

However, the Chinese have implemented a fast turnaround visa process to enable broadcasters to replace approved crew who have tested positive before they flew to China. 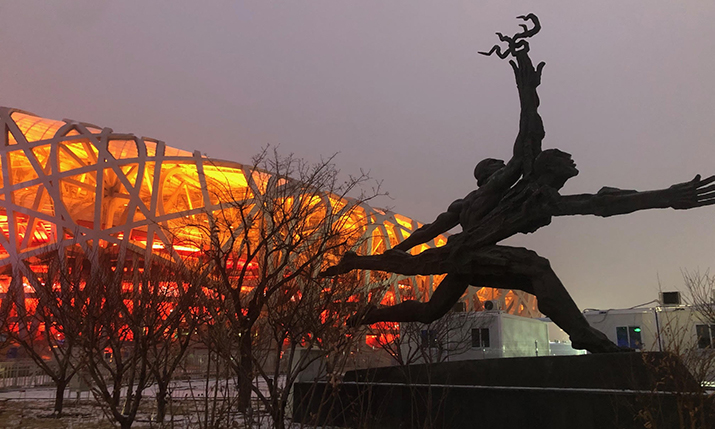 The Bird’s Nest Olympic venue in Beijing, ready for the Winter Olympic athletes to begin competing on 4 February

The broadcaster is producing its Beijing 2022 coverage using a mainly remote production model. BBC Sport is well-versed in doing this for Winter Olympics’ as the events are smaller than Summer Games’ which tends to make it simpler to arrange to have more people off-site.

Says Bramley: “For the Winter Olympics, we’ve tended to operate in a remote way for a number of years, actually, so in a way there is nothing new. As it’s not quite as big an event as the [Summer] Olympics it’s harder to justify having the whole team on site. This means we can actually manage the production remotely in our existing BBC production space in MediaCityUK, which was very different for the Olympics; just the sheer scale of a Summer Olympics means we’ve got to expand the Salford operation, which isn’t fit for purpose for an event of that scale.

“Curling’s going to be a big venue for us, we’ve got an announcer position there as well so we can do two-ways with our commentary team and our experts before and after the events. That’s certainly going to be something there’s a lot of interest in.”

“The advantage of that is [Salford will] get access to all of the host feeds, not just the main venue feeds, but all of the multi clips, which give us the extra camera angles, the extra footage they need. We’ve got reporters who can come in and voice material in the IBC, which is always a bit more flexible than having to record a voice track and send basically everything back to be edited in Salford, which is what we did in the Summer Olympics; it works fine, but it’s actually more flexible to have someone on site.

“We’ve also got four additional cameras on top of our radio camera, which will mainly be going to venues doing live interviews from Mix Zones, but we’ll also be shooting features and material for if [editors] want to top and tail an event for our highlight shows,” continues Bramley. “So that’s a combination of live interviews, which can be done throughout the day, but also packaging up items potentially for our highlight shows to just to give a different feel and a different take on the event itself.” 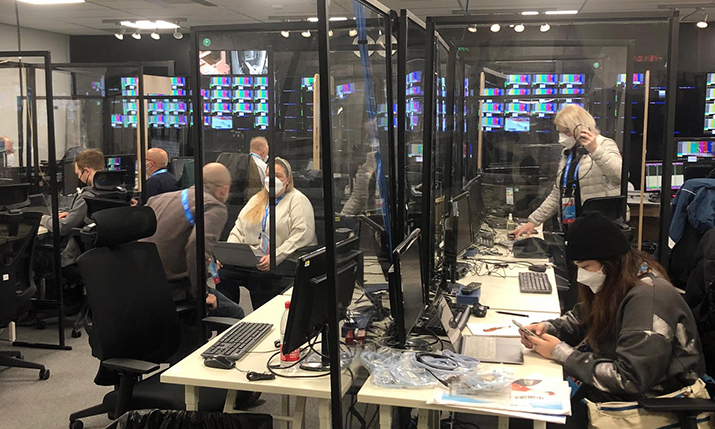 The BBC office inside the Beijing IBC

Carving out the commentary

With the vast majority of its presentation being done from its new virtual reality (VR) studio in Salford, BBC Sport is minimising the need to present from Beijing says Bramley.

“We don’t have any presentation as such on location, however our reporters [Matthew Pinsent, Steve Cram, Jenny Jones, Katherine Downes and Sarah Mulkerrins] will be reporting live on location from curling, figure and short track speed skating, sliding, snowboard and freestyle, and we’ll also have an Olympic Park radio camera which will also be used for athlete interviews.”.

He goes on: “We’ve tried to scale back some of our onsite operations from the last couple of Winter Olympics, just because of some of the uncertainties around operating out here in China, and just some of the logistics, you know, getting around venues.

“We took the decision to move some of our commentary teams back to Salford [that we would have normally had on site]. This means the only commentary teams we have on site are mainly for curling, short track and figure skating. The rest of the commentary teams are back in Salford.”

Those three sports in particular are getting on site commentary because they are set to be popular events that have big entries, notes Bramley. Additionally, the British Olympic teams for these sports have good chances of winning medals, which will add to the appeal for viewers at home.

He adds: “There’ll be a lot of interacting with the athletes there. Curling’s going to be a big venue for us, we’ve got an announcer position there as well so we can do two-ways with our commentary team and our experts before and after the events. That’s certainly going to be something there’s a lot of interest in.

“Also, for the skating figure skating and short track teams, the venue’s quite close to the IBC and we’ve got Kat Downes who’s our figure skating commentator. She’ll also be doing some reporting for breakfast, so it makes sense for her to be over here so she can do both. So there’s a number of reasons [for having some commentators in Beijing]. Certainly for some of the freestyle snowboarding events, quite a lot of those events are kind of clashing so it would’ve been quite difficult logistically to organise it [commentary in the UK].” 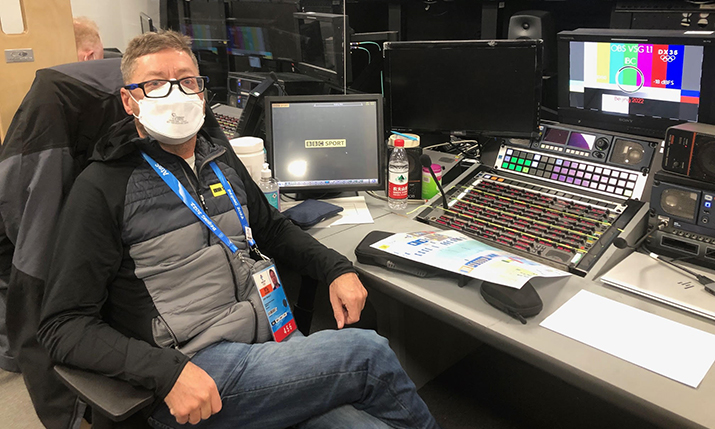 Avoiding a white out

The BBC’s reporters will be interviewing athletes in the Mix Zone, as they did in Tokyo. They have to maintain a two-metre distance from the athletes. Notes Bramley: “You have to do all your interviews with a long boom rather than getting up close to them. It makes it slightly trickier, but at least you can still get that athlete access. And of course in addition to that there are broadcast studios available here and athletes can access the IBC where we are based.”

On access to areas within the Olympic venues, Bramley comments: “We’ve got a roving radio camera, which is operating on the Olympic green. It’s still to be determined where we can physically go outside; they’re still working out what we can do, but that’s going to enable us to actually do live reports two ways with our studio back in Salford, and athlete interviews as well. So then you will get a sense of being outside in the Olympic Park. It’ll give you some sort of sense of location.”

Bramley says it is easier for the BBC to cover events remotely from the UK in the current circumstances. He notes: “If [commentators] are back in Salford, we can actually cover the events better.

“I know in an ideal world we would have everybody on site; there’s certainly things to be gained by being close to the venues and being able to interact with athletes and coaches and just get a better feel for it. But in this situation, where we have limited movement generally, I think it’ll actually work better for us to have them in Salford.”

The Beijing 2022 Winter Olympic Games will be on BBC TV, BBC iPlayer, radio and online from Friday 4 February