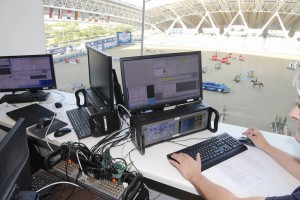 The Longines Global Champions Tour (LGCT) is the world’s leading equestrian event series, bringing together the top 30 ranked show jumpers, including Olympic and World Champions, to compete in prestigious locations. Millions of spectators enjoy the action from the Tour’s 15 stops via the LGCT website, national sports broadcasters, or at the venues themselves.

German event specialist hippo data, one of the timing and data handling service providers for Longines Timing, has been charged with delivering seamless technical integration for the entire tour for the past four years. Its responsibilities include timing, competitor data and statistics, big screen event coverage, and presenter-led programming for broadcasters. However, while the content requirements from each stop of the tour remains consistent, there isn’t any uniformity in terms of audio-visual infrastructure from one venue to the next, meaning that the Longines Timing team has had to develop an extremely flexible touring SDI and fiber-based workflow that can handle local venue requirements.

“Rather than relying on one travelling kit, we have built a number of different kits that are kept for use on different continents, several based in the US, China and across Europe,” explains Michael Häuser, hippo data. “The tour takes place in such a variety of stadia, indoor and outdoor arenas and sports venues, with such a tight window for production set up at each stop, that we needed to find a very flexible solution that would also ensure we could deliver all of the required event data and rankings, as well as broadcast quality content for the LGCT and its media partners.”

hippo data worked with system integrator Knut Schmidt of KS IT & Mediasystem to develop the flyaway kits, which have Blackmagic Design live production equipment at their foundation. “The main variables on the tour are whether the arena has SDI or fiber connectivity, as well as how many monitors and screens there are throughout the venue,” explains Knut. “For example, the finale of the Longines Global Champions Tour is held at Doha’s Al Shaqab Equestrian Centre, which is fiber based, and so we rely on a multitude of Blackmagic Design Mini Converters to connect our SDI workflow to the big screens and the master control room quickly, and with no disruption to signal management.”

All signal distribution on the tour is delivered by Blackmagic Design Videohub routers. hippo data’s kits deploy either a 20×20 or 40×40 router, depending on the size of the venue and how many outputs required. “The matrix routers are extremely quick to deploy, and the visual routing feature ensures that hippo data can connect all required inputs and outputs in a logical manner, regardless of the arena or stadia our teams are working from,” explains Knut. “Working in such a busy live environment, we need to be able to switch signals seamlessly, for example, if we want to jump to an interview with a surprise winner, or in other circumstances, to move to a back up signal, and the Videohub routers allow us to do that without disruption to our programming.”

The team also incorporates eventing coverage from the outside broadcast team from the local broadcaster covering each stop of the tour into its programming. “Again, this means further variables, because we can be dealing with a different number of cameras, depending on what the local event organiser has specified,” explains Knut. “We take a clean and dirty feed from the OB van on site, and also a dedicated camera feed that we can use for the classes which aren’t being broadcast.” The programme mix is also live streamed to LGCT’s website, as well as fed through to broadcasting partners such as Eurosport. .

The Videohub also handles information channels for the commentary team and the event logistics team, who manage all starting times for competitors, and deliver these through to monitors in backstage areas. Each of the kits also has two dedicated computers equipped with DeckLink capture cards for data manipulation, scoring and graphics production, which are overlayed in real time onto hippo data’s programme mix. “Whichever stop of the tour we are at, we have two very distinct roles: to deliver entertaining content for spectators, but also to provide accurate and reliable event information to organisers and competitors. The production kit we use has to be able to stand up to ever changing demands throughout a rigorous tour schedule, and the Blackmagic equipment more than meets these requirements,” explains Knut.