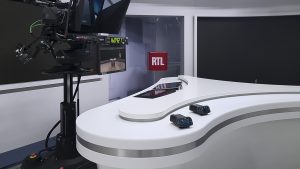 In addition, BCE is one of the first companies to adopt Bolero, Riedel’s all-new wireless intercom system. The company has deployed almost 30 Bolero beltpacks for use in its studio and outside broadcast (OB) operations.

BCE has deployed Artist in a modular and decentralized communications infrastructure for its production and broadcast operations, including OB and SNG trucks. Three Artist 128 mainframes, together with an Artist 64 and an Artist 32, are accessed via 60 multifunctional SmartPanel user interfaces (both rackmount and desktop) over an AES67-based network. Riedel’s fiber ring and intelligent trunking technologies connect the OB and SNG trucks when they are operating remotely, and Artist Dante interfaces support radio operations and provide a versatile IP network throughout the facility. For select customers, BCE also offers a VOIP connection over a WAN network using Riedel’s interfaces.

“After a thorough RFP process, we decided to partner with Riedel to provide communications for our new facility,” said Patrick Bernard, head of technical services at Broadcasting Center Europe. “Riedel is well-known for its innovation, reliability, and outstanding support, and Artist was the ideal choice for one of the biggest IP intercom systems ever deployed in Benelux.”

In addition to the Artist intercom system, Riedel’s MediorNet is used extensively in the new BCE facility to transport real-time audio and video signals between the broadcast studios and the master control room. BCE has deployed close to 20 MediorNet frames with a MetroN core router and MicroN high-density media distribution devices operating over a CWDM network. Frames are placed in studios to facilitate signal transport when TV shows are being produced. The OB van can also tap in remotely to the fiber network in Luxembourg and leverage the MediorNet infrastructure to deliver shows to air.

“We’re privileged to continue our partnership with BCE, whose impressive array of clients includes major TV and radio stations, film distributors, producers, advertising agencies, telecommunications operators, and public services,” said Wilbert Kooij, general manager, Riedel Communications Benelux B.V. “BCE was one of our first European MediorNet customers and was an early adopter of our high-end processing technology. Now, Artist and MediorNet will power a facility with redundancy in its DNA, and with the ability to support remote production with all the benefits of real-time signal transport.”