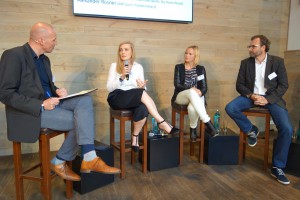 While IP-based production requires IT experts that can face the new challenges in the broadcast world, it is not necessarily an easy task to locate new talent with this specialised know-how. And if anything, the shortfall is becoming greater since huge data centres are able to pay much higher salaries than broadcasters. This was one of the messages that emerged from the Champions’ Summit in Berlin on June 4, which was hosted by Sky in association with SVG Europe and featured Blackmagic Design as event sponsor.

“The employee is the DNA of a company,” says Joachim Wildt, CEO, Plazamedia. “This is the key [to the] success of a company.“

Plazamedia GmbH TV- und Film-Produktion, a subsidiary of Constantin Medien AG, receives about 150 applications for each employment opportunity. “There is no lack in terms of quantity, but [there is] in terms of quality.”

Meanwhile, the core business of Sportcast is to provide technical services as well as to coordinate media services. The apprenticeship for a media management assistant has received a decreasing number of candidates since 1997. Alexander Günther, who is in charge of the management at Sportcast, observes that young people are fascinated by the new exciting media world but aren’t always clear on how they wish to specialise: “Generation Y has a different understanding [about] what work will be like.”

It is a different situation, however, when it comes to creative roles. Sportcast coordinates about 700 productions every year. “We [have a demand for] qualified candidates for production, camera, slo-mo and highlight editing,” says Günther. Besides training for audio-visual media designers, the DFB daughter company also hires lateral entrants. “This leads us back to the issue of quality.” The parameters that are expected at Sportcast include technical, content-based methodical competences. To pick a recent example, the requirement to deliver the Bundesliga games encouraged the Sportcast team to recognise that they have to book the slo-mo operators themselves because they will be editing the highlights.

Meanwhile, Thomas Repp teaches at the Bavarian Television Academy, where aspiring TV journalists, cameramen, editors and visual effects artists can book a crash course that runs over ten months. This institution is financed through a public-private partnership. “We have to ask who is taking responsibility for the juniors,” says Repp.


For Alissia Iljaitsch, executive director EMEA Vectoform, it is clear that when it comes to emerging production techniques, it is “the 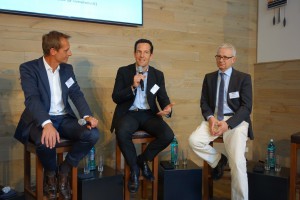 details that count”. In order to getting closer to the customer, she suggests the use of wearables that deliver these richer details. “Television needs to change. The event has to play the major role,” adds Kathleen Schröter from Berlin-based Frauhofer Institute. “We have to develop new ways of storytelling.”

Alesander Rösner, SVP Sport ProSiebenSat.1, is wondering if a new visual language will attract a bigger audience. “In the US, boxing is a mix of sports and entertainment.”

In Germany, there are also ongoing experiments with new techniques. Kathleen Schröter refers to a recent boxing match in which a compact HD camera was attached to the tie of the referee: “This generated a great amount of word of mouth. It is very fast and can be used live.”

But a new visual language can only be introduced if there is a general consensus about its potential, remarks Alessandro Reitano, director sports production at Sky Germany.