Sustainability has become a major influencer across the broadcast sector, from sports production to drama. This was shown at the British Society of Cinematographers Expo in London, where reducing our carbon footprint was a key theme amongst exhibitors and in seminar sessions.

While hardly any of the new kit at the 31 January and 1 February show was aimed primarily at live production, there were some that had sports applications, including the alternative power sources from Green Voltage, which is a distributor/hire company for the VOLTstack portable power units built by Vancouver-based Portable Electric.

These generator replacements are already used to replace noisy petrol generators at PGA golf tournaments in the US, particularly to power cameras and equipment on scaffold towers where operators could only work for a limited time due to generator fumes, and can now work for longer, and with less disturbance for spectators. They are also being used to power repeater boxes to distribute signals around the courses.

There are two small 2K and 5K units, with a larger trailer-based 20K unit coming soon – which should deliver 80-90kW hour capacity and fit in a parking spot. There is also a 200K unit in development.

“There is a real need for clean, silent power,” said Green Voltage director, Adam Baker, particularly as many local authorities and organisations are imposing restrictions on fossil-fuel generators. 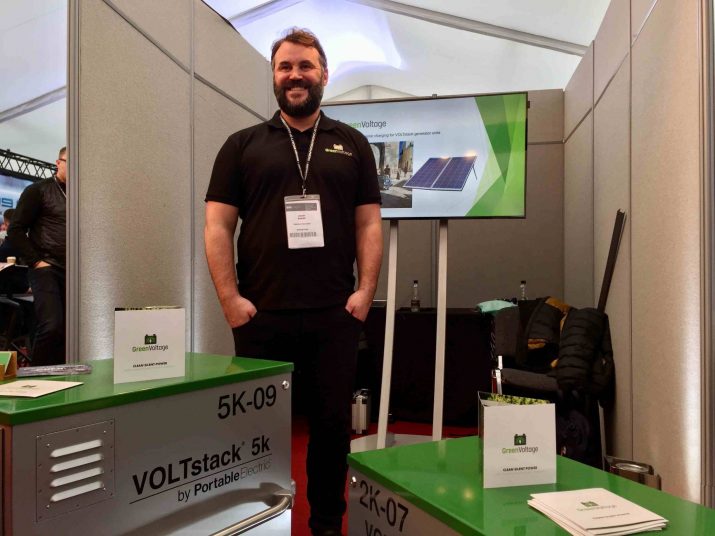 The VOLTstack units “recharge in just over two hours from zero to 100%, so even if you recharge it from a [petrol] generator it means any time over that is not polluting.” The units can also be combined with fold-away solar panels for cleaner usage, or it can use a wind turbine. All VOLTstacks can plugged in to any fast charger suitable for electric vehicles. A 5K VOLTstack can power a large light, like an Arri C60 Skypanel, for 14 hours. They are also popular for a video village, where 5K typically offers 10 hours run time. The systems can be monitored and controlled via an app.

The move to renewables in the industry has taken off rapidly, said Baker. London-based Green Voltage only started with four VOLTstack units last year and now has 30, with more on order, and has opened new distribution outlets in Belfast and Dublin. “As soon as people saw the advantage of it, everyone wanted it,” he said. Creative Technology (part of the NEP Group) has invested in 5K units for use on cycling events.

The batteries are guaranteed for 10,000 recharge cycles at up to 80% of their capacity, and Baker said that as energy density should double over the next five years, the 5K should become 10K in the same size unit. 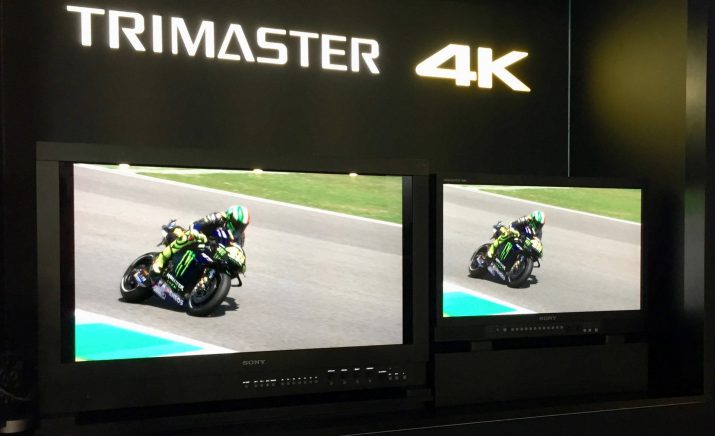 colour reproduction by reducing the brightness of the backlight in three steps to reproduce the correct colours and gradations in low-luminance areas. Another new function, Dynamic Contrast Drive, dynamically changes backlight luminance to adapt to each scene or frame when transferring images from PVM-X2400/X1800 to existing Sony OLED monitors. This makes it easier to check the highlight and low light balance with both bright and dark scenes. They should be available in July.

Also at BSC Expo, SmallHD unveiled what it claimed is “the world’s brightest 24-inch production monitor”, with 1,600 nits of brightness and a 3,100:1 contrast ratio, which should be useful for sports production, as it can cope with harsh sunlight. The new 1920×1080 2403HB IPS LCD screen has a rugged aluminium chassis for durability, and is 25% lighter than its previous 24-inch production monitor. It has 2x 3G-SDI inputs/outputs, plus HDMI i/o, and will begin shipping soon, with a list price of $2,999.

The Teradek Bolt 4K, which started shipping last month, is particularly well suited to lower-budget live production, according to its UK distributor, Holdan, which has recently tested it for horse racing in Lille. It is claimed to be the first wireless video system providing uncompressed 10-bit 4:2:2 4K HDR signals with zero-latency transmission (less than one millisecond). Besides coping with UHD transmission, over 5GHz channels, it will also deliver 120 frames per second HD.

It can have up to 1500m range, depending on the model, with instant reconnect if it should drop out, although it is also claimed to be “the most reliable, highest performance wireless video system” Teradek has made. It copes with all the main HDR formats (HLG, PQ, and HDR-10) and offers AES-256 encryption and RSA 1024 key pairing for security.

Its form factor is easy to mount on an ENG-style camera, using V- or Gold-mount connections, with pass-through power. It doesn’t have return audio/video, but Holdan says it is gaining interest for remote camera set-ups where this isn’t important but good value is.