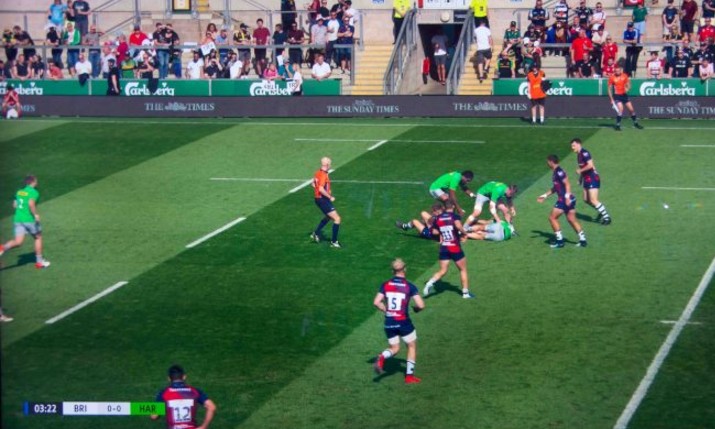 BT Sport staged a demonstration at IBC of a live 8K broadcast “to showcase what we think is coming next,” said Jamie Hindhaugh, BT Sport’s chief operating officer.

They had actually wanted a multi-camera production (with perhaps three or four cameras), but could only get one, an Ikegami SHK-810, as they are in such short supply and needed for testing in Japan ahead of the Olympics.

But, even getting a single camera transmission together was difficult, as there is a dearth of 8K equipment. For example, they couldn’t find a suitable live graphics system anywhere, so Moov, which is the main graphics provider for BT Sport, had to build a graphics system especially for the demonstration.

The production, Premiership Rugby 7s from Franklin’s Gardens, Northampton, was a normal UHD event, with 14-16 cameras, being broadcast by BT Sport, so they could also intercut with other cameras during the demonstration. The 8K camera was placed beside camera one, to give a great view of the rugby.

Fujinon provided the 8K PL-mount lens, Blackmagic Design its Atem Constellation 8K vision mixer, Appear TV the encoding and decoding, and Leader the 8K scope, with the signal carried over BT’s broadcast network to the Rai in Amsterdam. There were also Blackmagic DeckLink 8K Pro cards in the graphics engine.

BT Sport used a conversion system from Astro Design to take the contribution signal from four 4K SDI quadrants through to the HDMI 2.1 input required by the 85-inch Samsung screen. “The only thing that let us down was that last box in the chain, which couldn’t switch on the HDR signalling [in the Samsung], but you can’t force the TV into HDR mode,” said Andy Beale, BT Sport chief engineer. The signal was at a 59.94 frame rate.

The single-sensor (Super35mm size) camera outputs Ikegami’s own Dual Green SHV format using 3:1:1 sampling, going via SMPTE to the CCU. It comes out octo-3G, to allow the use of 3G infrastructure. It then went in to the Atem using quad 12G. 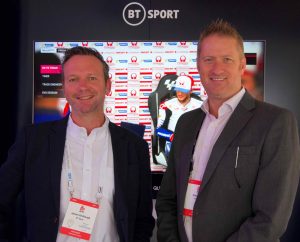 “It will just be available generally under the BT Sport Ultimate banner.” Indeed, that is one reason it rebranded its 4K service as Ultimate, because “it’s the ultimate viewing experience” on whatever device you are viewing on, he said. It is now aiming to deliver whatever the best that a set or device (handheld or otherwise) can handle, so that consumers aren’t faced with confusing resolution choices. Ultimate is available on a lot of different platforms already, from PlayStation and Xbox to OTT.

“We master in the best format you can have and it’s only constrained by your connectivity,” added Beale.

He feels that 8K as a consumer format is currently “further away than 4K was when we first looked at it in 2014,” so the demonstration at IBC was more about what is currently possible and next they will look for opportunities to take it further. They also wanted to see what people thought of the results, and “we wanted to push the envelope,” he added.

BT has already started working on virtual reality in 8K, which Hindhaugh hopes to be able to offer next year, replacing its current 4K 360 service. “In reality, 4K VR gives sub-HD images on the phone,” added Beale, but an 8K sphere means it can actually deliver much higher resolution at less than half the bitrate, thanks to tile media encoding. This sends just what people are looking at and the immediate surrounding tiles in high resolution. “It’s a really compelling use case for the encoding,” he said.

BT Sport is also looking at using a single 8K camera to replace a few key cameras at an event, and then taking various 4K images as crops, but it is also thinking about offering some pubs or clubs a big screen experience with the full 8K image – even if replays have to be upscaled.