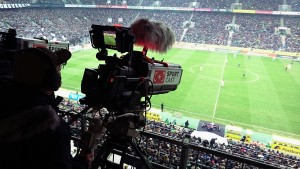 Capturing the action in UHD/HDR at the Bundesliga match on Feb 19.

Whether it is in a living room, at public viewing or in a sports bar, football fans are used to being as close to their Bundesliga stars on screen as they would be in the stadium – or in fact even closer. After full HD and Ultra HD, the name of the latest technical broadcast standard is UHD-HDR (High Dynamic Range), which delivers images with richer contrast, even in very bright or very dark areas of the picture.

With regard to the implementation of UHD-HDR in live broadcasting, the DFL Deutsche Fussball Liga is one of the leading leagues worldwide. On match-day 21 the entire workflow of a hybrid HDR production was tested for the first time. Four more tests are scheduled between now and the end of the current football season.

Together with its wholly-owned subsidiary company Sportcast, the DFL, on matchday 21 realised a complete TV live production in UHD-HDR for the first time in Germany. Whereas previously only recordings of separate cameras have been completed, the testing of the entire workflow was scheduled for 19 February at the match between Borussia Mönchengladbach and RB Leipzig. When the series of UHD-HDR tests is completed by the end of the current season, the experience gained will be evaluated extensively in order to decide to what extent and when UHD-HDR will be integrated into the live production.

The encounter between Borussia Mönchengladbach and RB Leipzig was produced in HD and Ultra HD for the regular live broadcasting and also, as a test run, in HDR. For this production a HDR/SDR workflow was implemented, which was specially set up for the host OB Van. The whole scenario was based on a hybrid UHD production concept, involving five native UHD cameras used in HDR mode. On-site, the UHD-HDR signal was continually monitored and compared to the UHD-SDR signal. The objective – to generate three programme feeds at the same time using different production standards – was reached, so the test can be considered a great success. With the workflow described above, the image quality of the basic TV signal was assured at all times.

“As producer of the basic TV signal for the Bundesliga, we engage intensively with new technologies, the aim being to continually improve the product quality,” says Josef Nehl, CEO of Sportcast GmbH. “The UHD-HDR test runs that we are implementing together with our partners and producers are an important step for us in fulfilling our pioneering role in applying innovative technologies.”