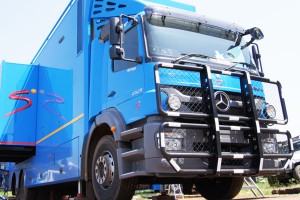 The 14-camera vehicle built for SuperSport Nigeria by WTS.

The new facility brings WTS’s total floorspace to 50,000 sqft, making it one of the largest broadcast specialists in Europe.

In tandem with this relocation, C2S Systems has changed its name to WTS Broadcast Systems, unifying its name with the rest of the group’s UK operations. The change in name is said to reflect the close relationship and crossover of services between WTS Media Group’s systems integration and equipment supply arms.

WTS has also confirmed that it will showcase the latest OB truck built by its systems team at IBC later this week – namely a 14-camera vehicle for SuperSport Nigeria. The truck will be located in the outdoor exhibition area, stand OE 114.