Capturing a Panoramic view of the Biathlon World Cup 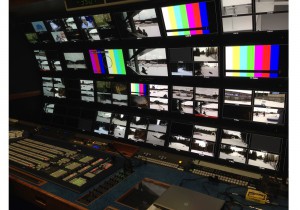 Production gallery for the Biathlon

Biathlon is a winter sport that combines cross-country skiing and rifle shooting.  The key event in the sport’s calendar is the Biathlon World Cup (BWC), which is a multi-race tournament that takes place over several months. The current season started on 30 November 2014 in Sweden, and ended with events between 19 and 22 March 2015 in Khanty-Mansiysk, Russia.

Television coverage of this final session in Russia was handled by local channel Yugra TV and OB provider Panorama.

“For the first time, the TV signal for the broadcast of the World Cup in Khanty-Mansiysk was produced fully in HD format in accordance with the IBU regulations,” states Vasily Kiknadze, CEO of Panorama. “For earlier BWC broadcasts, Panorama only provided its technical HD capacities for the ARD/ZDF unilateral programme.”

Panorama supplied two OB vehicles – a 24-camera unit and a 16-camera truck – for this year’s project. To enable the main vehicle to focus on the main production, the smaller unit was utilised to generate replay content only. A total of 11 EVS-XT3 servers (three 8-channel and eight 6-channel ones) were used for this part of the operation.

The regional signal was produced by Yugra TV using the second production gallery of the 24-camera unit using its own dedicated EVS server.

To help improve presentation, identify participants and ensure vital action was not missed, four spotters were employed to work alongside the programme directors, both on the track and at the stadium in Khanty-Mansiysk.

Kiknadze observes: “The camera setup had essentially remained unaltered compared to the previous years, except that more were placed along the piste to ensure maximum coverage and provide a more detailed and impressive picture of the competition.”

“Upgrades for our 2015 coverage include an increased amount of specialist equipment compared to the previous years,” says Kiknadze. “For instance, this year the 2D cableway was replaced by a 3D cableway, which ensured greater creative freedom for cameramen. The cables and hoists system allowed the camera to move freely and smoothly along any trajectory within an area of 200 x 200 metres. For the first time, a telescopic screen was installed at the shooting range to provide a spectacular view of athletes running up to the firing ground. The other telescopic screen was installed high in the forest to enable us to shoot the race from a spectacular overhead position.”