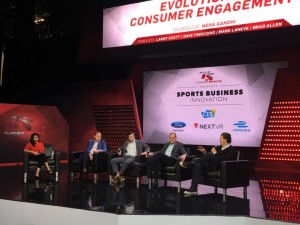 From left: Larry Scott of the Pac-12, Dave Finocchio of Bleacher Report, Mark Laneve of Ford Motor, and Brad Allen of NextVR discussed the future of fan engagement at CES

The evolution of consumer and fan engagement was one of the big topics at the CES Sports Business Innovation Summit, and a panel comprising not only technology leaders but also a major force in the automotive industry and a college-conference head who thinks globally laid out some interesting insights into where sports-fan engagement is headed.

“Social and mobile is now,” said Dave Finocchio, CEO/co-founder, Bleacher Report. “Our biggest goal is to help move the market along so that social dollars are not going to platforms but rather to the publishers that have a direct relationship with the audience. The focus is on how to connect with the audience when it is most engaged.”

One of the hot topics at CES was VR and how it will change the way consumers connect with content and brands. NextVR Executive Chairman Brad Allen noted that VR production has moved from things like courtside single-camera demos to storytelling and even having reporters.

“We want to bring an experience to fans that is unique and new,” he said. “And that is exciting to us.”

He cited the NBA, what he called the most global of sports, and the challenge of engaging millennials.

“For them,” he said, “VR is another screen, but it also keeps the viewer focused because they are immersed in the commercials and advertisers have their full attention because there is not something else going on in the VR environment.”

European football, particularly in Asia, is also a huge market for VR, which has nearly 300 million fans in China.

“Manchester United has 650 million fans in Asia, so how do you get them closer to the action when they are not going to be able to go and watch the match in person?” he asked. “And [internet service portal] TenCent has 900 million people in China using one of their messaging apps. The numbers are astounding, the fans are passionate, and China is a massive opportunity.”

Although Manchester United fans in China may not get a chance to see their favourite team in action, fans of Pac-12 universities do. Pac-12 Commissioner Larry Scott discussed the college conference’s efforts to build the Pac-12 brand in China.

“Our universities are global brands, and athletics can build awareness of our programs,” he said, adding that the real goal is to make prospective students in China aware of the Pac-12 universities as an option. “And, with YouTube or LeTV, we can create subscription models for either long-form content or highlights. There are more ways to connect with fans.”

Scott reported that the conference continues to experiment with new types of programming and how fans can share in the afterglow of a victory via social-media platforms.

“We’re thinking about the event well beyond the two or three hours that the event actually happens, with dozens of hours of programming leading up to [an event like the Rose Bowl],” he said. “And we’re spending more and more time on the digital side of engagement rather than the traditional broadcast.”

For example, the conference is making use of Facebook Live on the sideline before a game. He noted that the digital movement is putting pressure on the traditional cable bundle but said he is excited by the interest in live sports programming from the world’s biggest media companies.

“There is more competition and more options for consumers, like the skinny bundle,” he said. “But the future of live sports is going to be much more user-friendly.”

“Those realities and new technologies are disruptive to the cable ecosystem, and the average person is spending more and more time on their phone rather than watching the game,” he added. “So it is harder and harder for brands to reach consumers the way they used to.”

The upside of social media is that the platform is made for celebrating the accomplishments of a favorite team or player. The latter, said Finocchio, must change the way media companies cover sports as fans may care more about Lionel Messi or Cristiano Ronaldo than they do the actual club.

But the one-two punch of celebrating success on both the team level and the individual-player level offers a tremendous reach that goes well beyond just fans.

“You can reach millions who are not traditional sports fans,” he said, “and the sports culture is bigger than it has ever been and more accessible to everyone.”

That reach on social media also requires diligence and a commitment to quality.

“On Instagram, trust is the number-one thing, and we need to make sure we retain the trust with everything we post,” Finocchio said. “So we need to integrate content from brands that is at the same level as our content.”

It also means acknowledging that many fans don’t want to sit down for an entire event.

“We need to learn about what the individual users want and give consumers content that might be outside of their scope of interest,” he said. “We need to put something in front of them and learn from them.”

Mark Laneve, VP, U.S. marketing, sales and service, Ford Motor, explained that, for auto manufacturers, the new showroom is the mobile device, whether a laptop or a tablet: “Most consumers do 85% of their shopping before they show up at the dealership. And virtual test drives are a big challenge for us.”