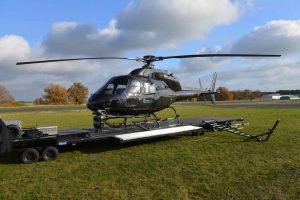 Cineflight has been providing aerial photography and other related services since 2009.

When the Dutch cycling team Boels–Dolmans Pro Cycling was gaining the lead at the 2017 UCI Women’s WorldTour in Vårgårda, the Swedish broadcaster SVT presented some impressive aerial shots that gave the audience an overview of the situation and increased the production value of this live event. The aerial filming crew from the Hamburg-based company Cineflight covered the elite road bicycle racing event for the fourth time. With its own helicopters, systems and a highly trained crew, Cineflight takes aerial shots at sports live events such as the Euro League, Formula E, World Sailing Cups and the Champions League all across Europe.

Founded in 2009 by the German jet and helicopter pilot Patrick Nüske, Cineflight was created as a symbiosis of film and flying that unites helicopter, mounts, operator and monitors under one roof. Equipped with the systems Cineflex V14, Shotover F1 and a Cineflex Dragon 6K with a Canon lense the cinematographer Dieter Goerke takes care of the right framing. “Which images are required depends on the kind of story that shall be be told,” says Goerke, who also works as operator for Cineflight’s own drones.

Before the 2017 UCI Women’s WorldTour kicked off in Vårgårda, Cineflight’s CEO and chief pilot and the cinematographer started with the set-up and tests. “If you are filming from a helicopter, you have to check the route in advance,” says Nüske. In terms of security it is essential to be aware of obstacles such as wiring issues. Because the bicycle racing route runs through a city area with big trees, the helicopter needs to take a vertical filming position in order to avoid shading by trees. “The helicopter position needs to be optimal so that we can do the best image design.”

During prep, camera tests are essential to make sure if the wireless transmission via vislink is working perfectly well. “In Sweden, there are no mountains where we can position the aerial antenna,” Nüske points out. “Therefore we are using a 60 metre cherrypicker to receive the signal from the helicopter.” Cineflight works closely only with professional wireless companies who are handling the signal transmission, which requires a vislink, transmitter, receiver, booster as well as ESA-certified antennas at the helicopter.

Thanks to its twin-engine Airbus helicopter AS355 that is in the same power class as a medivac chopper, Cineflight gets all kind of possible permissions. Due to critical weather conditions some helicopter types don’t always get the greenlight to take off. “It never happened to us that we had to stay on the ground,” says the Cineflight CEO. The company also created a unique feature that makes it more competitive in terms of pricing. Cineflight can transport the helicopter together with the entire crew and and the whole equipment by truck on a trailer which is a big cost-saver but also gives the team more independence. “We can position our helicopter regardless of time and weather, even at night,” underlines Nüske. “This saves fuel and costs for positioning flights and is also more environmentally-friendly.”

When the team constructed the trailer, it was a key issue to keep the weight of the trailer including the helicopter below 3.5 tons. “The largest requirement was to limit the height to 4 metres”, recalls Goerke. “Therefore, we chose small tyres and twin axles.” The sides of the trailer can be folded out so that the helicopter can start and land on the platform. Since 2013, the Cineflight crew has driven with the trailer more than 120,000 kilometres. “It is an economic benefit if we travel in a radius up to 1,500 kilometers from Hamburg.” For the Swedish broadcaster SVT it would have been more expensive to get a helicopter from Stockholm that has a linear distance of 250 kilometres from Vårgårda. 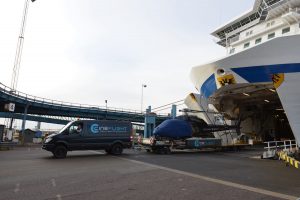 Cineflight used its Cineflex system to take the aerial shots of the various rounds of bicycle racing. The HD signal of the aerial shots were sent to the OB van where the entire telemetry – including chrominance, luminance, aperture and the white balance – was adjusted while the cinematographer concentrated on the sharpness, zoom, focus and the framing. “That is a luxury situation. Usually we take care of everything if we are doing aerial shots for live events with the helicopter,” says Goerke. “SVT is a real exception because the colour corrections are done on the fly in the OB van. They have an extra transmission path for the image control systems of the camera.” The entire workflow is SDI-based, and the video signal is sent in MPEG-2 compression. The communication with the control room is crucial for the cinematographer so that he knows when he is on air.

“If we are covering big bicycle races which require a larger range, we need a relay helicopter and/or a relay plane as well,” stresses Nüske. For this purpose Cineflight equipped a Cessna 210 as a relay plane that has more than six hours endurance and can go up to 7,000 metres. In that case, the video signal is transmitted from the helicopter to the relay plane which sends a downlink to the OB van. Thanks to a GPS tracking system the pilot on the plane can see which position he has to take in order to stay in the transmission range. A graphic shows exactly where the motorcycles, the helicopter and the OB van are located and in which area the plane still has a connection to the OB van. When the helicopter moves in a certain direction, the plane needs to follow it. At sports event locations such as the Nürburgring, where the pilots have to face orographic shadings, it is essential that the plane stays vertical above the helicopter.

Cineflight is also operating drones but due to restrictions about drones not being allowed to fly above crowds, they hardly use them at live events. “We are trying to make everything possible that is legal,” Nüske underlines. “In the end the decision is up to the national aviation authorities.” In Spain, for example, drones can only be operated by qualified pilots who are aware of the legal aviation structures.

With several years of experience, the well-practiced team is producing aerial footage for about a handful of sports live events such as the Euro League Final in Warsaw or the Champions League, where they filmed a formation of people at the pre-show in the old Olympia stadium in Berlin. When working for the Olympics, the Cineflex signal even gets its own channel so that the video signal can be sent out all across the world. “During the live events, it is not switched very often but it is used a lot for the summaries.”

Besides a helicopter, plane and drones, Cineflight also has a camera boat when the team is covering Sailing World Cups. “We want to show the emotions of the sailors without distracting them by coming too close,” says Nüske, who created a specific solution for this requirement. A spring-loaded mount is positioned at the center of the catamaran that provides them with stabilizsd images with a camera angle of 240 degree. “On our next boat we will have a 360 degree mount,” concludes the CEO of Cineflight. “We are bringing all different kinds of live sports events close to the viewer by air, road or boat.”