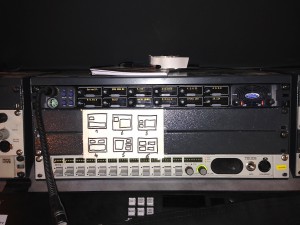 Known to fans simply as The Dakar, the annual event attracts more than six hundred international competitors in four different categories — Bike, Quad, Car and Truck — travelling up to 900 kilometres a day across 13 stages through Argentina, Bolivia and Chile. The 2015 Dakar Rally, which was watched on television by a billion viewers in 190 countries, took place in January.

Unique operational challenges arise from the sheer scale of the event, teamed with the dangerous and noisy aspects of the sport and extreme landscapes involved with endurance racing. It is therefore essential for safety and the smooth running of the event that comms are reliable, clear and flexible.

To take advantage of new and evolving technologies such as audio-over-IP, the rally organisers decided to upgrade their existing Clear-Com matrix communications system with the latest solutions. Clear-Com’s French distributor, Audiopole assisted Integration partner, Astrium, in the specifications for the installation and the system design.

The new system is based around Clear-Com’s Eclipse HX 8.0, which enables standard IP- connected V-Series user control panels to operate both as fully functional intercom keypanels and as multi-channel audio gateways with no requirement for additional hardware or software licenses. This was crucial as the rally needed to send and receive three audio channels from each V-Series panel at remote positions, including two of the V-Panels that were based in Paris. This innovative software feature extends the Eclipse HX’s existing capability to provide remote matrix intercom connectivity over diverse IP infrastructure at no additional cost, making audio and intercom connectivity for applications such as OBs and live events more cost-effective.

Two Eclipse systems travelled with the rally entourage, and for each stage they were set up either in a building or in a vehicle. The systems were used by numerous staff, including race management, medical and safety regulators, and the media (including approximately 40 television stations).

“Dakar Rally has been relying on Clear-Com products for the past 25 years so when it came to updating the installation with the latest advances in technology there was no question about who we were going to talk to,” said Sebastien Rousée, events operation director at Astrium. “The Clear-Com IP-based solution offered us all the features we needed, within our budget, and proved to be extremely successful throughout the rally.”

“We have had a great relationship with Dakar Rally for many years and to be involved with its new set up is very exciting,” said Richard Palmer, regional sales manager at Clear-Com. “We were thrilled to be able to provide the rally with the perfect solution for its needs and to ease any of the tech teams’ worries during the race, enabling them to execute the rally with precision by using reliable and coordinated communications systems.”