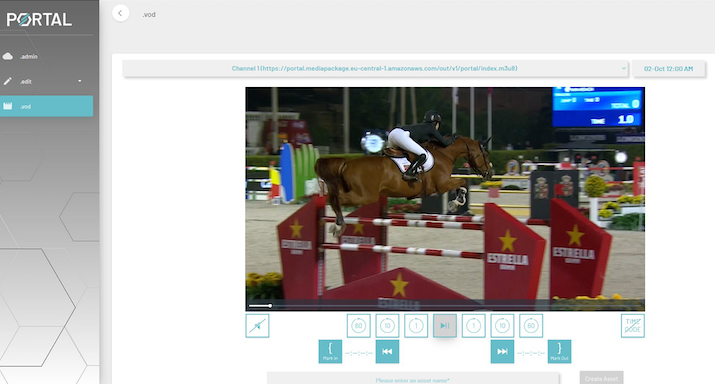 When ClipMyHorse.TV and FEI.tv produced the world feed at the European Equestrian Games 2021 for the first time, ClipMyHorse used new Portal modules Portal.edit and Portal.vod from Logic Media Solutions running under the AWS Cloud to produce the competition’s daily highlights summary. The event, which took place in Germany this summer, featured dressage and show jumping events.

Deploying a combination of cloud-based highlight clipping with Portal.vod and editing under Adobe Workspaces on AWS with Portal.edit, ClipMyHorse simplified the daily production process. Additionally, remote production was easier with editors and producers located in the UK handling post-production.

With Portal.vod, the producer clips (using mark-in and mark-out) the desired sequences from the world feed stream and entitles them. These assets are automatically forwarded to the editor’s Adobe Premiere Workstation on AWS, who is already working on the highlights summary in parallel. Afterwards, editors and producers can edit the final version under the control of Portal.edit in the Adobe Premiere Pro Workspace and export individual clips to further tasks. Common to all Portal modules, Portal.edit and Portal.vod run on an HTML5 user interface allowing the users to use Adobe Premiere Pro in the browser without installing the software on their computer.

By applying the Portal modules, ClipMyHorse.TV also reduced costs, such as travel, accommodation or workplace on-site. As a further benefit, the number of workspaces were able to be adapted at short notice on request.

Portal.edit and Portal.vod are part of Logic’s Portal Framework modules for the AWS ecosystem of cloud-based media workflows. With Portal.vod, users can create highlight clips from live streams and make them available to the system for further editing. The module allows users to set markers in a ring buffer, display the timecode and entitle and export assets for further processing. These assets can then be edited directly in the AWS Cloud using Portal.edit in Adobe Workspaces of Adobe’s Creative Cloud.