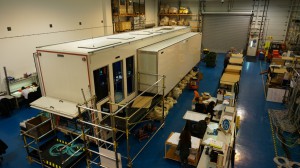 The upcoming Confederations Cup football tournament in Brazil will provide the biggest test bed so far for Ultra High Definition (UHD) broadcasting and involve the world’s 4K outside broadcast truck, currently being systems integrated by Sony in the UK. The manufacturer and FIFA, the game’s governing body, are to produce live coverage of three games at the Mineirão stadium in the south-eastern Brazilian city of Belo Horizonte.

Sony and FIFA say that footage from the 4K trials during the Confederations Cup, which begins on 15 June in the Brazilian capital, Brasilia, will not be shown to an external audience but will be a way to assess the creative and technical aspects of the technology for live sport TV production and workflows.

The tests will use the 4K vehicle commissioned by UK OB company Telegenic towards the end of last year. The truck, designated T25, has been coachbuilt by AF Smith and is now with Sony Professional for equipment installation and wiring (pictured). T25 has being designed to work live in both HD or 4K. Cameras will be Sony HDC-2500Rs for HD and F55 35mm digital film cameras for 4K.

Other gear includes a MVS-8000X vision mixer, which is able to take Quad Full HD Streams (QFHD) as though they are a single source; Miranda 4K UHDTV enhanced 8500 Series routers; and three Sony PVM-300 4k LCD monitors. On the audio side a 48-fader Calrec Apollo was delivered to Sony for integration at the beginning of April and will be able to handle 5.1 surround sound.

Commenting on the new truck, Peter Bates, managing director of Telegenic, said: “Sony and Telegenic are continually striving to revolutionise the live production process and together we’ve broken new ground in delivering new formats to market – first with HD, then 3D and now with 4K. This latest venture, which is set to make 4K live production a reality, heralds a new era for the broadcast market which will, in turn, transform the entertainment experience as we know it.”

Mark Grinyer, head of business development for 3D, 4K and Sports at Sony, added: “We’re tremendously excited about the FIFA Confederations Cup trials. We’ve got a long history of working with FIFA to ensure fans get the very best experience when watching sport. Sony is proud to be a pioneer of 4K solutions and we’re keen to see the benefits this exciting new technology can bring to the sports world. While various aspects of 4K broadcasting have been built and tried before, this trial will be a first in terms of the scope of production for live sports production.”