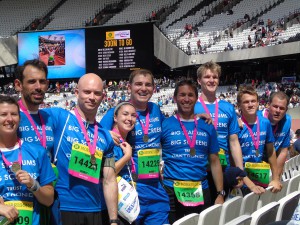 The eleven-strong team was comprised of six Daktronics UK employees and the support of five family members. The money they raised will be donated to Paul’s Place (paulsplace.org.uk), a Bristol-based charity that supports and facilitates physically disabled adults.

The team was closely aligned with the site of the run, as the route takes in all the London 2012 Olympic Games legacy venues, including the Lee Valley VeloPark into which Daktronics has installed four Daktronics LED video displays, each measuring 18.10 square metres, in preparation for the 2016 UCI Track Cycling World Championships.

The displays are located one in each corner of the indoor velodrome, to ensure fans get multiple views of the action in the event that their seats have any obstructions. Positioned at eye level from the seating areas fans can easily look from the displays back to the live action and vice versa.

The route also passed the Queen Elizabeth Olympic Park stadium. Indeed, the Run represented the first event to take place there since its transformation following London 2012 and Daktronics recently announced its own involvement. Two Daktronics 15HD pixel LED video displays measuring a vast 214 square metres will be installed into the venue in time to host the 2015 Rugby World Cup.