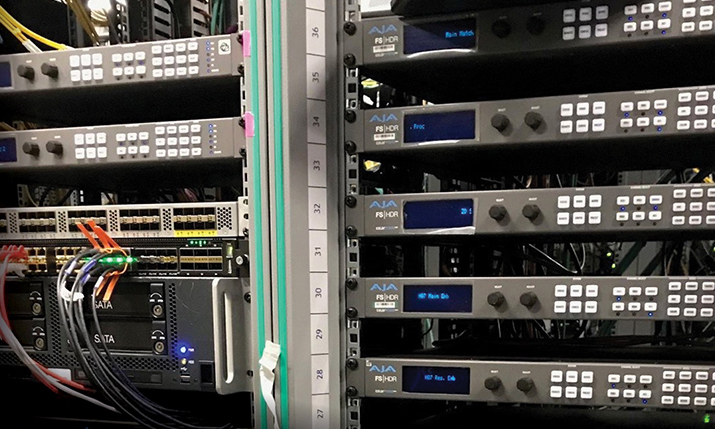 UK television facility dock10 has utilised its AJA FS-HDR real-time HDR/WCG converter/frame synchronisers to facilitate simultaneous live HDR and SDR coverage for some of the most notable sporting tournaments held across Europe this summer.

To facilitate remote production for each live sporting event, dock10 took live UHD HDR feeds of each match and integrated it with 3G SDI SDR content created in its virtual studio to produce both Ultra HD HDR and HD SDR live programmes for transmission.

The dock10 team first received live sports match feeds in-studio, and then used the FS-HDR to synchronise and colour space convert the signal to UHD SDR for monitoring and to feed the background of dock10’s virtual studio system. The devices were also used for MADI audio embedding, and for UHD HDR to HD SDR down-conversion for transmission. FS-HDR’s video delay feature was used to match lip-sync, as the venue audio feeds came via different routes to the picture feeds, while FS-HDR’s LUT conversion features were also heavily used.

“We initially looked at the FS-HDRs for their LUT processing capabilities, but quickly started using so many other features that the devices offer – from frame synchronisation to audio processing. FS-HDR is truly a swiss army knife for HDR production, and saved us from purchasing or renting other equipment,” said Michael Lodmore, duty technology manager at dock10. “We relied heavily on our client’s R&D department, which had extensive experience with LUT conversions, to produce the best possible conversions while preserving the colour rendition of camera pictures and graphics.”

Dock10 used three of its own FS-HDRs for its production work and rented additional units as needed. The company’s experience preparing for and executing these sports projects, as well as client demand for content prompted by the pandemic, have inspired dock10 to make remote editing and production now part of its standard offerings. Along with FS-HDR, dock 10 also uses AJA Corvid 88 video I/O cards for render engines in its virtual studio.