After successful stops in London and Orlando, Florida, the Invictus Games continued its travels in 2017, calling Toronto home for the third iteration of the Games. The Games, created by Prince Harry in 2014, bring together wounded, injured, or ill active-duty or veteran service members to compete in a variety of adaptive-style sports. With this year’s Games in its own backyard, Dome Productions handled all host broadcasting duties for the eight-day event.

“It was a big one for us,” says Mary Ellen Carlyle, SVP and GM, Dome Productions. “[The Invictus Games] were definitely a different sort of Games. They were totally inspiring, and the stories are amazing. There were some challenges, but I think we stepped up to each challenge and learned a lot.” 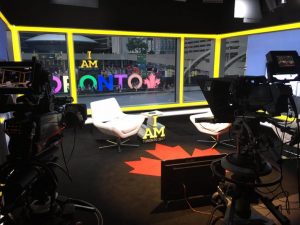 Dome Productions deployed more than 200 staffers and a fleet of production trucks across the city to cover the Games. Journey handled the Opening and Closing Ceremony at Air Canada Centre; Atlantic covered Track and Field at York Lions Stadium before traveling to Toronto’s Pan Am Sports Centre to cover Swimming.

More than 50 cameras were used to cover the Invictus Games, including 12-14 for Opening and Closing Ceremonies, 10 at Mattamy Athletic Centre, seven (including an underwater camera) at Pan Am Sports Centre, 10 at York Lions Stadium, four at Fort York National Historic Site, three at Nathan Philips Square, and an additional five provided by the BBC.

Dome Productions was awarded the contract last December through the Invictus Games and the Canadian International Military Games Corporation, and immediately brought on Jim Marshall to executive produce the event. Carlyle brought three staffers under her wing to create the host broadcast team, including Technical Manager Seann Harding, who was responsible for IBC operations.

Host-broadcasting support throughout the event

The IBC was located on the second floor of Dome Productions’ Rogers Centre offices. Dome converted its studio space into a host broadcaster office area, and built out a master control area based on Evertz routing. Additionally, Dome boosted its EVS and Avid workflow, tying a total of nine Avid suites and seven ingest stations into one central shared storage system through Interplay and enabling rightsholders to access content in real time.

“When you look at the size of an Olympics or a Pan Am Games, and you look at the size of the [Invictus Games] field, even though it was a little bit smaller, the complete backbone of delivering an IBC was still all there,” says Harding. Dome offered a number of transmission options to Games rightsholders, including physical XDCAM disc and file-based transmission via FTP and Dropbox. Every rightsholder selected some variety of file-based transmission. “That was really kind of an eye opener when you look at before there would be a lot of disc or tape… Everything was either hard drive or file-based, and the Dropbox worked flawlessly.”

According to Carlyle, the entire event ran smoothly. “Not one technical failure,” she says. “We didn’t have one issue. We lucked out.” The timing of the Games was a challenge to the Dome team, as baseball was wrapping up, the Canadian Football League was well underway, and hockey was just around the corner. But having the IBC located within Rogers Centre enabled Dome to ensure that every event was covered.

“Having [the Games] in our own backyard, we were able to provide an IBC which was connected to the world,” says Carlyle. “If you took that outside, the cost would have been phenomenal to build an IBC like we had. [This] helped the Games as much as it did the budget… The biggest thing that we learned is the Avid workflow and EVS workflow, and delivering in our new world to the rightsholders [via] Dropbox.”