Darren Long, director of Sky Production Services, and others have come together to form a Just Giving Fund to support Bernie Ross, the former head of production for UEFA. Bernie meant a lot to the industry at large and also to SVG as his support of events like the Football Production Summit over the years helped put it and SVG Europe on the industry map. Bernie is currently battling a bi-polar mixed affective disorder (detailed in a note from Darren Long below) and we encourage SVG members and sponsors to donate today so Bernie can return to a normal life and a prominent role in our industry. 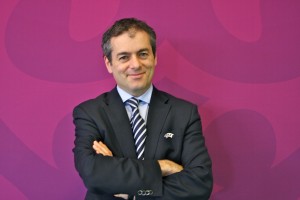 Bernie Ross at the 2012 Euros in Warsaw.

“Most people will know or have heard of Bernie Ross, the former UEFA Head of Production. Bernie is one of the most forward-thinking sports executives in the industry and has been responsible for some of the biggest sporting events in the world, like the UEFA Champions League, UEFA Europa League and UEFA Euro 2016, along with many more events over the last 11 years. I worked with Bernie on the UEFA Champions League when Sky held the rights for this sport and I can say that Bernie was always someone who wanted to push technology and move it forward at a pace and to keep innovating in sport.

Life sometimes takes some strange and horrible paths and it certainly has for Bernie and his family. During the summer of 2016 and throughout the autumn, Bernie started to feel very unwell, but didn’t really know what was wrong thinking it was a stomach problem, unfortunately Bernie didn’t recognise how bad his illness was and it got progressively worse just before leaving UEFA to join Discovery Networks. Bernie never did start that job at Discovery Networks instead after much investigation for his possible stomach complaint at the John Radcliffe hospital and after a lot of misdiagnoses, they discovered that he was suffering from a bi-polar mixed affective disorder.

Bernie’s life and his family’s life have been seriously impacted by this terrible mental health illness and Bernie is now permanently in hospital where they’re trying to treat his condition with medication. Bernie is not well enough for people to see him at the moment, but I know that his situation has put considerable stress on his family and has left them in a very difficult financial position.

I like to think that our industry is amazing at supporting each other at times of need and I would like to ask all of you to help support Bernie, his wife and children to get through this terribly traumatic period in their life, which I’m sure they will do. If you could give what you can to the Bernie Ross fund to help his wife and children while Bernie isn’t able to work I know this would be greatly appreciated by the family.

If anyone would also like to write to Bernie please send your letters of support to 60 Walton Street, Oxford OX2 6AE or post messages on the just giving website page.”