More than one billion TV viewers across 150 territories have access to a truly world-class broadcast of the US$30million Dubai World Cup fixture from Meydan on March 31.

Horses from a dozen countries compete in nine top-class races, including five Group 1 contests. Attracting international interest, the event is covered live by a host of leading (non-wagering) broadcasters including Sport 24, which is available live on nine cruise lines and 11 airlines including title-race sponsor Emirates. 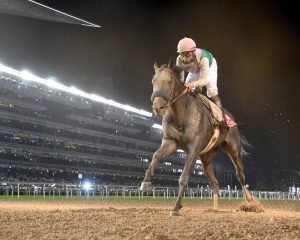 The MENA (Middle East and North Africa) region is served by live coverage from Dubai Racing Channel and Yas TV.

The Dubai World Cup headlines Eurosport’s weekly equestrian magazine programmes broadcast in more than 120 territories, while Trans World Sport, the leading global sports magazine programme, offering the fixture added exposure, as does CNN, which is covering the race for its World Sport. ITV airs content from the fixture within its live broadcast on Saturday in the UK.

In addition, news outlets across the world receive the story of the day via SNTV, the leading sports news video agency, which has a potential household reach of more than one billion.

Racecourse Media Group, with the support of its technical partner Timeline TV, has aimed to deliver the most innovative Dubai World Cup broadcast yet, with the help of more than 50 production and support staff at Meydan and 20 camera operators.

Created through the vision of HH Sheikh Mohammed Bin Rashid Al Maktoum, Vice President and Prime Minister of the UAE and Ruler of Dubai, the Dubai World Cup fixture is set against one of the most iconic sporting theatres, the state-of-the-art Meydan Racecourse. The architectural masterpiece measures 1.2km in length and can seat over 60,000 in its grandstand.