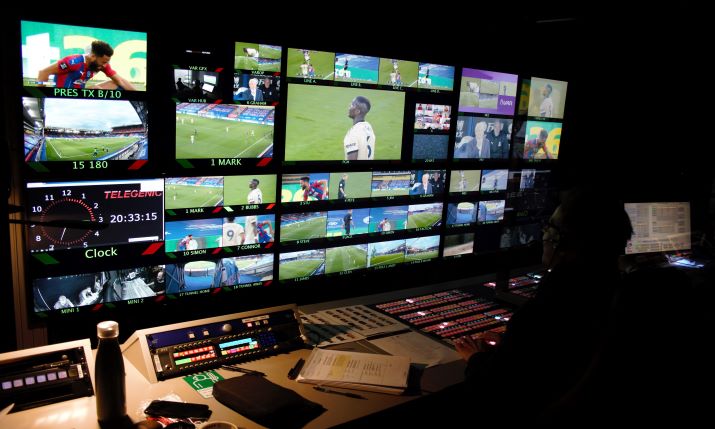 The EMG UK companies involved in the UK ROC are Aerial Camera Systems (ACS), Broadcast RF, CTV Outside Broadcast and Telegenic, which worked closely to pull the EMG UK ROC together over just three weeks during lockdown as a collaboration with BT Sport, to facilitate the production of the broadcaster’s Premier League games.

Based in High Wycombe, Buckinghamshire, the EMG UK ROC is now being used as a remote production facility by BBC Sport and BT Sport simultaneously for Premier League matches. In fact, on Sunday 5 July, the live BBC1 match between Southampton and Manchester City was produced remotely by BBC Sport at the ROC. The game has become the Premier League’s most watched live televised match, with an audience of 5.7 million.

How the plan began

Eamonn Curtin, deputy CEO of Telegenic, told SVG Europe: “We had been looking at different remote models for a while when Neville Smith, former head of Rugby League at Sky Sports, approached us with the interesting opportunity of covering remote transatlantic rugby league games for the Toronto Wolfpack, who were looking to gain promotion to the Super League. After successfully delivering the first game from the BT Wimbledon Depot, we started looking at connectivity options into High Wycombe to potentially build the ROC for the new Super League Season starting in February 2020.”

The EMG UK ROC was built in just a few weeks, starting on 18 May during lockdown. Telegenic and CTV OB already had the plans in place for it, with the original schedule to allow it to be built ready for the coming new football season. However, those plans were bought forward due to demand during lockdown.

The companies already had most of the necessary equipment to build the EMG UK ROC ready, as well as the connectivity, which had been installed before lockdown by BT Media & Broadcast.

Curtin continued: “During lockdown and with the Wolfpack games being cancelled, we had to accelerate our plans for the ROC to cover the larger contracts we hold within the UK. Thankfully Sean Mulhern had already signed the deal for the connectivity at the beginning of the year for the ROC; he upped it from 1+1 Gbps to 10+10 Gbps fibre with Tier 1 connectivity to BT Tower and BT Columbo House, (I’m glad he did that!). We then started looking at different ways to deliver remote production, focusing on reducing the number of people onsite, improving sustainability and the quality of life for production teams, and still delivering the high quality UHD/HDR programme.

“During lockdown we worked closely with Jamie Hindhaugh and Andy Beale at BT Sport, their primary concern being the safety of the crew both at the ROC and on site. This is also the first step towards de-centralised productions which we believe will be the new norm,” he added. 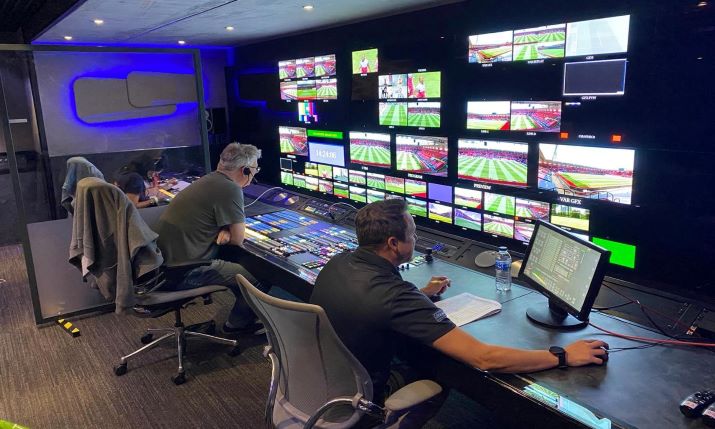 This first ROC is the start of many more, noted Curtin: “As we are part of EMG UK, our joint roadmap is to build and provide European wide remote operating centres for all our clients. We teamed together with CTV to build and design the layouts for the three galleries which could all be used simultaneously when required,” Curtin went on. “We repurposed Telegenic’s original building and started the build with only three weeks to go before the return of football. The diverse 10Gbps fibre network can currently handle 48 vision circuits and is scalable.”

The EMG UK ROC is about creating a no-compromise remote production, which is able to tale ‘regular’ remote production to a new level. Curtin explained: “The remote solution we are using is called remote surface production, which enables us to remove the entire production and EVS teams off site into the safety of the ROC with its socially distanced individual workstations. This could not be achieved on site in a single OB as normal and would require overflow vehicles or additional cabins.

“Due to the decision to have all the English Premier League teams play at home instead of neutral venues, this option was the safest and most sustainable available to minimise crew on site and keep everyone safe. We can deliver remote productions without compromising the number of cameras or the format. We have delivered more matches in UHD HDR than HD, and with just two frames of latency for those working at the ROC,” he noted.

Meanwhile, Adam Berger, CCO at CTV, commented that the technology used to create the EMG UK ROC is helping to take the cost out of the connectivity required for this type of broadcast workflow: “Remote surface production also takes out the major expense of remote productions; the connectivity”.

Berger went on: “The cost of the connectivity [in this example] is squeezed out because you’re sending the multiviews of the vision sources that the operators would have traditionally viewed in the OB, but they are now networked back to the ROC’s galleries and EVS suites diversely and at very low latency. Essentially, it is the most efficient and safest way of delivering remote production and operations.”

The design of the EMG UK ROC does, however, still mean there is a strong place in the future for OB trucks. Berger noted: “We still need our trucks on site to do their role, because the core technology and the intelligence remains on site which adds resilience to the operation.”

Now, the broadcast for every Premier League match for BT Sport, and around half for BBC Sport, are being done remotely. Berger noted that the reason only half of BBC Sport’s fixtures are being carried out at a distance is because, “of congestion of fixtures, or location, or in some instances, the scale of coverage means it can be achieved locally”.

Berger added: “It’s a balance of cost versus sustainability, and what is the most cost efficient way of doing things.” 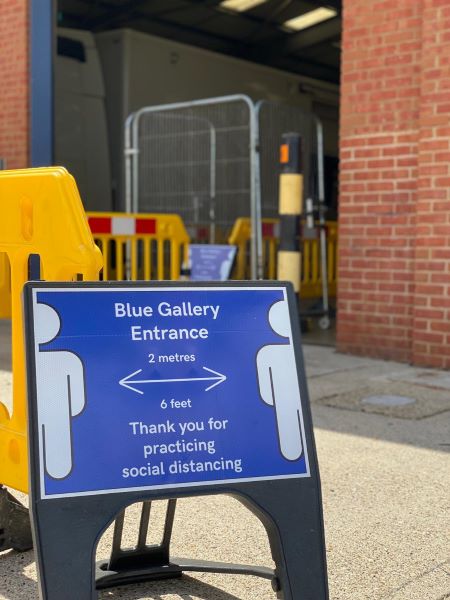 Looking at a sustainable future

On the sustainability aspect of how the EMG UK ROC works, Berger estimated that for the BBC Sport and BT Sport matches alone, CTV will save between 28,000 and 30,000 miles of crew travel by the end of the current restart season of six weeks.

If you add to that the fact that the majority rights package for the Premier League season is held by Sky Sports, which is doing its own remote production operation, the number of miles saved is quite phenomenal.

The main BT Sport match director, Jamie Oakford, was pleased with the new set up. He emailed Curtin after the first game back after lockdown broadcast by BT Sport, stating: “Just wanted to say thanks to you and all your team both at the ROC and at the OB for everything they delivered on Saturday. I think the setup at the ROC is an amazing feat of technology and from a workflow point of view absolutely no different to being in the truck. Everybody was extremely helpful and eager to assist with any issue or requested change and most importantly the broadcast felt clean, simple and without problem.”

Curtin added: “It’s been an amazing journey so far and without great minds like Sean Mulhern and teamwork with CTV, it just wouldn’t have been a reality. It is something the whole EMG UK team can be proud of. When you hear seasoned production crew members say that it’s having a positive effect on their work life balance because they can get home to see the kids, it makes it all worthwhile.”

Peter Bates, CEO EMG UK, added: “The High Wycombe EMG UK ROC and its capability to deliver UHD HDR in a socially responsible way and without compromise to the production workflow is a shining example of collaboration and teamwork at the highest level.

“It’s a taste of what can be achieved when the combined talents, experience and dedication of the staff across all four of the EMG UK companies come together with a single purpose, and this is just the start; there’s much more to follow,” concluded Bates.