To deliver the most live coverage of the Special Olympics ever, ESPN last week deployed one of its largest and most complex remote productions to date, connecting its operation in Abu Dhabi with its broadcast centre in Bristol, CT, via redundant IP links.

In addition to sending live competition feeds to Bristol for streaming on ESPN3, the broadcaster transferred more than 15 TB of ENG footage back home over the week and deployed a Bristol control room to produce its nightly onsite studio show as a REMI [remote-integration] operation.

“This event is one of the furthest REMIs that we have executed. Our operations team is very experienced with the workflow and continues to refine it on each event,” said Jarrett Baker, associate manager, remote production operations, ESPN. “Special Olympics Abu Dhabi is the first ESPN remote to transport all video content, file transfer, communications, corporate-data network, internet, VoIP, IPTV, and tallies back to Bristol over a redundant IP link. None of the transmission paths arrived in Bristol as baseband video.” 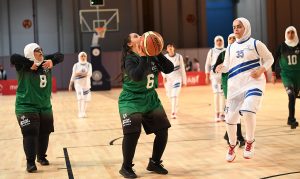 ESPN’s coverage of the 2019 Special Olympics World Games Abu Dhabi kicked off with the Opening Ceremony on 14 March, airing a three-hour special live on ESPNEWS. Working with host broadcaster Abu Dhabi Media, ESPN3 streamed multiple live feeds each day throughout the Games (15-22 March), delivering more than 175 hours of live coverage across multiple venues. And, each night, 2019 Special Olympics World Games aired live on ESPN2, ABC, or ESPNEWS from a set at the Abu Dhabi Sailing and Yacht Club at Corinche Beach.

In addition to the US domestic coverage, ESPN’s coverage reached more than 200 countries through its own branded television networks, digital streaming services, ESPN sub-licensees, and multiple syndication partnerships.

Abu Dhabi Media provided ESPN with six venue feeds and an overarching world feed — all of which were transmitted to Bristol for streaming on ESPN3. This represented a significant increase in content for ESPN’s coverage compared with previous years.

“The Special Olympics Abu Dhabi LOC and Abu Dhabi TV played an integral role in the volume of live event content that we sent back to Bristol,” said Baker. “In the past, ESPN covered one or two live venues. [This year,] Abu Dhabi TV provided ESPN with six live venue productions each day, along with a wraparound world-feed production. This allowed our ENG crews to focus on telling individual athlete stories more completely than they may have been able to do in the past.”

In terms of its onsite footprint, ESPN shipped 14 tons of equipment from the UK, US, and Australia by air and built a production facility inside the IBC at the Zayed Sports City Stadium in just 10 days.

“Our biggest challenges on this project involved logistics,” said Baker. “Mobile units were cost-prohibitive due to ocean transit times from Europe.”

Baker added that the Opening Ceremony on 14 March presented a particularly challenging logistical effort since the host-production mobile unit was several hundred yards from ESPN’s production compound. However, ESPN was able to coordinate cable interconnects, camera positions and more to ensure that each entity had a successful broadcast.

Transportation also proved to be a big challenge in Abu Dhabi. “Our ESPN safety team handled the transportation challenges of an international event,” noted Baker. “Between ENG teams, technical crews, and production personnel, our shuttle system required a significant amount of coordination and planning.”

From Abu Dhabi to Bristol: The REMI workflow in action

“It was a challenge establishing the fibre services from the Abu Dhabi Sailing and Yacht Club back to the US,” acknowledged Baker.

ESPN’s host set, which was located at the Abu Dhabi Yacht Club, was a full REMI production: four camera feeds and all microphone feeds were sent to Bristol, where the nightly Special Olympics show was produced out of a dedicated control room.

ESPN deployed seven ENG teams in the field to cover events and transferred all media from Abu Dhabi to Bristol for use by the edit team and production of the nightly studio show. All ENG footage shot by ESPN and Abu Dhabi Media was shared at the IBC. As of last Thursday morning, close to 15 TB of ENG footage had been transferred to Bristol over a 1.4-Gbps Signiant pipe.

“We were able to achieve the fastest Signiant transfer rate of 1.4 Gbps since ESPN’s REMNAS [Remote Near Access Storage] workflow began,” said Baker.

The ESPN operation also used 32 channels of communication via a Unity intercom server between the US and Abu Dhabi, with Dante-based comms and IFBs onsite. ESPN’s week-long live coverage concluded Friday and will be rounded out with a two-hour programme on ABC on Saturday, 30 March at 3 pm ET, providing highlights from the Closing Ceremony and from the week of coverage.