Baseball has used novel effects-microphone placements in the past two years for special games. That use — with mics installed at the perimeter of the infield, on bases, and on players and managers — has turned a corner this season.

ESPN is now deploying that type of effects audio as part of the broadcast sound for its weekly Sunday Night Baseball productions, moving it from a novelty to an integrated part of the sports’ broadcast audio.

According to Kevin Cleary, remote audio specialist for ESPN, eight Quantum5X wireless transmitters attached to Countryman transducer elements are being placed in the grass perimeter of the infield for each Sunday-night game, starting with the April 1 matchup between the San Francisco Giants and the Los Angeles Dodgers in L.A. and continuing through the Cubs-Cardinals game in St. Louis on July 29.

In addition, microphones and, in some cases, IFB earpieces are being fitted on players and managers, when possible. The first time such audio was used on-air was during a spring-training game: chasing a fly ball hit by the Cubs’ Kris Bryant to right field, Red Sox outfielder Mookie Betts carried on a breathless two-way conversation during and after the play (which resulted in a stand-up triple) with announcer Karl Ravech.

“I ain’t getting this one, boys,” Betts said as he ran hard to his left, watching the ball sail overhead.

“The sound is tremendous,” says Cleary, noting similar experiences with other players, such as the Twins’ Logan Morrison, who wore a microphone and IFB earpiece during a preseason match with the New York Yankees and chatted with the announce crew about how he wound up with his number 99. “Basically, we’re hearing the players interacting with the booth talent, doing their own play-by-play descriptions. It’s one thing to hear that during an All Star Game or a World Series, but now it’s becoming a regular part of the regular-season sound.” 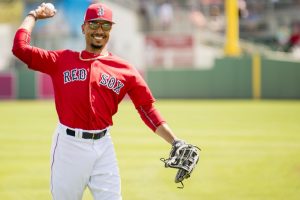 And that, said Cleary, represents an inflection point in baseball’s broadcast-audio evolution. Just as on-field audio was tentatively introduced into NFL games, first with a microphone on the umpire. Then, in 2010, when that official’s position was moved as a protective measure and microphones were added to the centers and guards to compensate, on-field audio became an integral — and expected — part of the game. Cleary expects on-field and player audio to follow the same arc for viewers.

“There’s actually no way it cannot,” he said, “because it’s just so good.”

The audio is mixed by A1 Dan “Buddha” Bernstein, and submixer Joel Groeblinghoff works the effects, both aboard NEP’s EN2, which returned this season as the mobile home of Sunday Night Baseball production. Bernstein is mixing on a Calrec Apollo, Groeblinghoff on a Calrec Artemis.

Bernstein notes that the shift to regular use of on-field microphones has some unusual aspects. For instance, moving to different stadiums each week means that mic placement will vary according to the style of “haircuts” each ground crew gives its home-plate area. Getting the mics into the grass near the plate gives the audio team a good balance between proximity and protection, but, for Sunday’s game in Anaheim, the mics were buried deeper than usual, in the dirt around the plate because the grass was too far away.

“We were closer to the action, and we got some explosive sound there, including hearing umpire’s and players’ conversations,” Bernstein recalls, noting that he heard a bat splinter with sound that was nearly cinematic. However, that sonic accessibility came at the cost of one microphone lost, stepped on and disabled.

The sound from the two microphones placed in front of the pitcher’s mound offer another excellent source. “We’re getting the grunts nice and loud,” he says. “Someone told me it sounds like a tennis match out there.”

The crew has been able to wire players for sound, although, as with the NFL, the audio is recorded and used for replays and packages, but it’s enough to bring viewers onto the field during play.

Bernstein says that listening to Houston shortstop Carlos Correa cheering his teammates on added an entirely new dimension to seeing the ballplayers on the screen: “It actually gets you into the mind of the player. We’d use it all the time of we could. There’s just nothing else like it.”