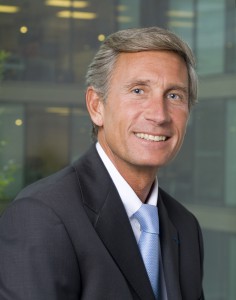 Euro Media Group says his mission will be to consolidate synergies between the European subsidiaries, to identify and accelerate group’s development around new media and to develop the Euro Media strategy and brand at international level.

Thierry Drilhon is a graduate from the EAD and Stanford University. He is married with three children and is a marathon runner. He is one of the rare French senior executive with a very successful track record in global organizations. An adept of “francoptimisme” and recognised by numerous top executives, he has been awarded «Chevalier de l’Ordre National du Mérite” by the French government, in recognition of his ability to develop the Information and Technologies market in France. He is also co-founder of the “Etats de la France”.

Starting his career with Digital Equipement France in 1985 where he was successively European Manager for large accounts, Marketing Director and finally Sales Managing Director.

In 1996 Thierry joined Microsoft France as Deputy Managing Director and member of the management board in charge of the Corporate Division.

In 2000, he joined the CISCO group, firstly in France (CEO), then in Europe (Vice-president) and finally at Worldwide level (Vice-president Corp. leading Channels, Partnerships and Alliances).

“Euro Media is the European leader, ideally positioned to offer new solutions, thereby enriching its clients’ audiovisual experience,” says Drilhon. “Market developments around new media must be seen as a tremendous opportunity for strategic development and long-term growth for the group.”

Jean Pierre Barry, Chairman of the Board, says Thierry’s arrival is a wonderful opportunity for guiding the group’s transformation towards new medias.

“Thierry brings with him his international experience, his personal-style leadership and his extensive knowledge of technological partnerships,” he adds.