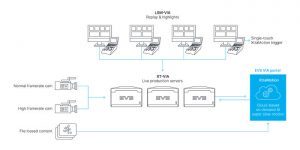 A diagram of the EVS XtraMotion workflow.

XtraMotion has been developed to help broadcasters enhance the viewing experience by bringing new super slow-motion capabilities in an efficient and cost-effective way. While native super slow-motion sources (sources that have been captured at 120fps or more) are great for storytelling, they cannot be deployed in every environment. Typically, most point-of-view cameras are not capable of producing super slow-motion video. Also, the full chain of super slow-motion capture represents a certain cost on the infrastructure. Productions therefore need to carefully select which of the cameras, if any, will be captured in high frame rate.

Now with XtraMotion, productions benefit from super slow-motion on virtually every camera angle as the high frame rate is created on-demand rather than natively. Relying on advanced machine learning algorithms developed by EVS’ team of experts, the process works for any production format – from 1080i to UHD/HDR – and any original frame rate, transforming a 60fps video into a very smooth 180fps video as well as a native 180fps into a 540fps video. It also works on post and archived content. 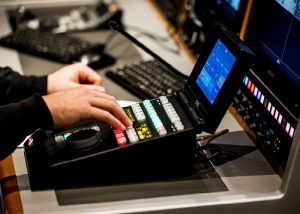 XtraMotion was first evaluated by FOX Sports at Super Bowl LIV last year, to convert standard frame rate clips from the specialty cameras into high frame rate footage. It has since been used on other productions including MLB’s World Series in Arlington, Texas in November 2020, and on a more regular basis for live coverage of the NFL, NCAA College Basketball and NASCAR. The end of this successful trial period marks the official launch of XtraMotion, with FOX Sports revealing the service has now become an integral part of its productions.

“EVS’ XtraMotion has continued to show a lot of potential since the first tests were conducted during last year’s Super Bowl, so it seems only natural to use it on more of our productions moving forward,” says Mike Davies, SVP, Field and Technical Management and Operations, Fox Sports. “Storytelling is always top of mind at FOX Sports and applying the XtraMotion effect onto our increasing number of specialty cameras really helps us give that extra visual wow factor to our productions.”

“We have used each of our interactions with their experienced team during live events to improve our solution,” says Messa. “We are now very proud to see it being deployed for its productions on a regular basis.”

Kevin Callahan, Director of Technical Operations, Fox Sports adds that the super slow-motion shots created from the in-car cameras at Daytona 500 this year let viewers truly appreciate how good the drivers are and gave a real feeling of how steep the banking really is.

“And the fact that XtraMotion is a cloud-based service means we can deploy it whenever and wherever we want, and easily scale it to the capacity we need on every one of our productions,” he says.