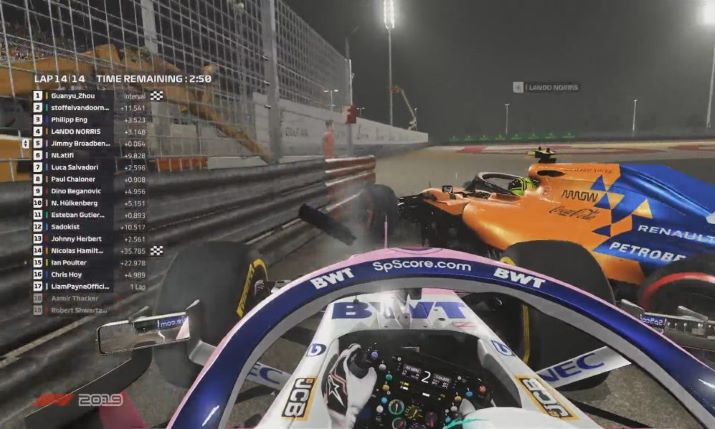 Formula 1 has revealed that its F1 Esports Virtual Grand Prix series, which ran for the first time this year to fill empty broadcast schedules during the lockdown, has achieved a record-breaking 30m views across TV and digital platforms.

Speaking to SVG Europe, Tan said: “It shows how we were able to reach a large number of our existing and new fans with racing action and live esports at a time that all sports had to go dark. It also helped us grow our fanbase by cross-pollinating with wider sports and entertainment [for example Aguero, Stokes, Poulter, 1 Direction, Luis Fonsi and more].

“Additionally, it shows the reach we were able to achieve as we built on the drivers’ personalities, which you can’t see behind a helmet, with 11 current F1 drivers taking part. It also shows the value we were able to deliver to our commercial partners and broadcast partners with new and innovative content at a time where there very little to no live sports.”

Tan commented on the significance of these record-breaking figures: “This is our most successful esports initiative since entering the space in 2017. Our 2019 F1 Esports Series was previously our highest ever reach and engagement at 8.7 million viewers which in itself is huge and off the back of +70% growth year on year. Meanwhile, this year the Virtual Grand Prix series at 30 million was an incredible reach. We also over-index against our competitors.”

Fans tuned in for live sporting action, including eight Virtual Grands Prix, Pro Exhibition races and #Challenge events. The series was created to enable fans to continue watching Formula 1 races virtually, despite the ongoing COVID-19 situation, and to watch their favourite drivers battle it out when racing was not possible. Throughout the series over half the F1 grid took to the track, with 11 drivers competing in at least one race in the series.

The F1 drivers were also joined by a host of famous faces, including a Ryder Cup winner, professional footballers, and music chart-toppers.

Given the success of this Virtual Grand Prix, there are more plans in the works for 2021, Tan confirmed: “We have plenty of learnings here and are excited to be able to implement these to our strategy across the short term as well as long term. Without giving away too much, we are implementing some immediate learnings, for example around online solutions and uncovering F1 driver personalities, to our 2020 F1 Esports Series this year, as well as exploring the medium and longer-term opportunities around creating potentially F1 driver-focussed esports activations, such as in a pro-am capacity during the off-season. This is all to be confirmed, but we are excited about the potential here.”

The second event, titled the Virtual Vietnam Grand Prix but taking place on the Albert Park circuit, was the number one trending video on YouTube UK post-event that day (Sunday 5 April). Further success was evident on YouTube, with F1 having three of the top five sports videos on the platform in the UK, France, Germany, Spain and Italy between 15 March – 28 April, with number two and number five being Virtual Grands Prix.

The series has allowed a number of F1 drivers to engage with fans on a more personal level, as well as boosting their profile on a wider scale, with drivers including Charles Leclerc, George Russell, Lando Norris and Alex Albon all regularly connecting with fans through their personal Twitch accounts, reaching an additional 2.7 million viewers, according to TwitchTracker.

F1 continues to lead the way in its social output, which was enhanced further through content from the Virtual Grands Prix, gathering 695 million impressions across multiple platforms, and over 85 million views on video content throughout the series.

Concluded Tan: “Now the series has come to an end, it gives us a chance to reflect on the huge success that it has been, which is reflected in the very impressive viewing figures and engagement stats.

“Our aim at the start of this journey was to provide live sporting action for those craving some racing relief, and now as we and the teams, whom we are extremely grateful to for their support and commitment throughout the series, turn our focus to the 2020 season and the F1 Esports Series, we can be proud that we were able to provide such entertainment to our fans, and beyond.”