Dan Reed, Facebook’s Head of Global Sports Partnerships, took to the stage at Sportel in Monaco to give attendees a better understanding of how to make the most out of Facebook and Instagram. “The industry is in the early stages of coming up with new programming formats for this distribution platform but it is really exciting days to be working with the sports industry,” said Reed. “We’re working with the entire sports industry to help the industry understand how to use Facebook to meet business objectives.” 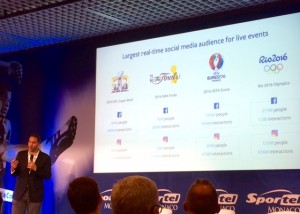 Facebook’s raw numbers continue to impress. There are 1.71 billion people on Facebook, 500 million on Instagram, and with 40% of millennials consuming video via mobile devices and three billion new people expected to be using a smartphone by 2020 the future is bright for the intersection of sports and social media. Simulcasts of live events on broadcast TV and highlights are just part of the equation as studio shows, interviews, and Facebook Live posts by athletes and celebrities continue to drive traffic.

“One common misunderstood fact with partners is that Facebook is all about likes,” said Reed. “While they are important a much more important part is how many users you are reaching on a weekly or monthly basis. A small page can reach well outside those who like it by triggering people to share by posting great content. There is not a perfect correlation between the size of pages and number of reads a page gets.”

Keys to growth? Use video as it is found to be more engaging and is more likely to go viral. And also post frequently as not all followers see everything that is posted as algorithms come into play. Athletes, added Reed, by far get the most distribution on Facebook compared to leagues, teams, clubs, and federations. Empowering athletes and on-air talent is important for growth.

“The ultimate metric is how many engagements you get per like on a page,” said Reed. “We have partners who can double their reach in six months by changing their posting strategy. First-person content works well on Instagram as does behind-the-scenes content.”

One trick to drive Instagram likes? A picture of an empty stadium or venue prior to the event.

“It’s an insider moment that can drive engagement and growth,” said Reed.

With 650 million users following a sports-related page there are plenty of opportunities to not only reach fans but also monetise them.

“There are two strategies to monetisation,” said Reed. “First is engaging the user and then taking them off to be monetised somewhere else. And what is also emerging is branded content.”

The move to branded content is a recent one, with verified pages allowed to share branded content which is defined as any post That features a third-party sponsor. Publishers keep 100% of the revenue from the sponsored sale.

This year Facebook took a big step forward with video with the launch of Facebook Live. “A big focus for is live video which we launched in February for public figures to give Facebook users a glimpse into their lives and then we opened it up to everyone,” said Reed. “And in addition we have an API so that it can play a broadcast feed through any system to Facebook.”

Fox Sports in America, for example, programmed parallel Facebook-only content on Facebook during the Copa America tournament this past summer. Live pre-game analysis and a live halftime show was delivered to Facebook users and Reed says that efforts like that can result in upticks in TV ratings. During the final the Facebook buzz concerning the match and penalty kicks saw the TV audience rise from 2.9 million to 3.7 million.

“It was a great example of using Facebook as a platform to support the existing broadcast,” said Reed.

Reed also offered up a couple of tips for how to drive Facebook user interactions. First, for text-based content like article he recommends taking advantage of the “Instant Article” feature that is a way to share content without requiring the Facebook user to access an external site, something that can take from 8 to 10 seconds. That lack of a delay has increased consumption by 25%.

It is also now possible to insert digital ads into content and currently in early Beta is the ability to insert mid-roll video ads within video content. And on the ticketing and merchandising side there is now the ability to sell both natively on Facebook (as well as Instagram).

The explosion of video content on Facebook also required the company to get more on top of managing and protecting intellectual property. One step is Rights Manager, a system that allows the user to ingest content and then fingerprint it so that there are alerts if someone else is distributing the same video on Facebook. It can also immediately protect that content or access a whitelist of pages that are allowed to show the content. It also has API integration for external rights management systems.

“There is also a media operations team that is actively protecting content on your behalf,” said Reed.