Pixellot has officially launched Pixellot Air, a new automated recording and video analysis camera which was specifically designed to serve the needs and financial capabilities of the grassroots and academies’ market. 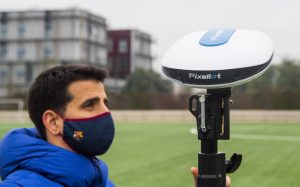 Pixellot Air has two 4K cameras and is designed for recording practices or events that do not need to be broadcast live.

Pixellot Air is a portable, lightweight device with a dual camera array that each captures 4K images and uploads them directly to the cloud.  The system can be easily set up at any field or court and has the ability to record over 12 hours of play. Air’s remote, automated functionality removes the need for a camera operator, electricity, or even an internet connection.

Prices start at $849 in the US and differs based on territory. Yossi Tarablus, Pixellot, director of marketing, says there is a cost for the camera and a monthly plan.

After a game or practice, the automatically produced video will be available for coding, tagging and annotating on Pixellot’s coaching platform. Thanks to its seamless integration with VidSwap, coaches can enjoy in-depth analytics and full game video breakdowns to gain a competitive edge. There is no need for additional third-party analysis or coding platforms.

“Air will bring a revolution to grassroots sports and academies,” said Pixellot CEO Alon Werber. “Imagine an affordable, portable, easy-to-use device that will not only produce a game or practice automatically, it will also provide all the highlights, statistics and breakdowns of each play.”

“In addition, players and fans will also be able to view games and create and share highlights,” he said.

Pixellot Air uses Pixellot’s patented AI-automated technology that is in use at more than 15,000 fields and venues around the world. The coaching features of the system were developed with the guidance of FC Barcelona in partnership with the Barca Innovation Hub, as presented during World Football Summit Live in late November of last year.

“Each season, FC Barcelona produces more than 130 terabytes of video generated by Pixellot related to the tactical and practice analysis of all of our teams, across all sports,” said Imanol Eguskiza, innovation manager of the Barça Innovation Hub. “We started using Pixellot Air with our Club Academy in Barcelona and in our grassroots teams. They provided us with some test units and we helped them develop the solution by assessing and suggesting needed functionalities for our academy teams.”