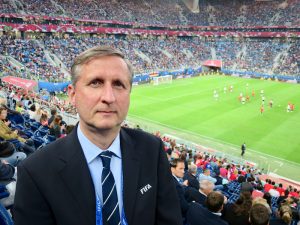 Russia has been put through its paces with the dust having now settled on a captivating FIFA Confederations Cup final between Chile and Germany at the Saint Petersburg Stadium on 2 July, 2017. The highlights on the pitch were plentiful, but it was behind the scenes where the international broadcasting world was eagerly deploying the very latest technology to ensure the best possible TV viewing experience for football fans around the world.

While it might mean that FIFA, its Media Rights Licensees (MRLs) and the appointed host broadcast production provider, HBS, will now be able to put their feet up, it will only be momentarily as the countdown to the main event – the 2018 FIFA World Cup Russia – is well and truly underway.

With the tournament kicking off in Moscow’s Luzhniki Stadium on 14 June next year there is really no time to lose, as all involved stakeholders will bring together the lessons learned from the FCC and start putting them into action. With a long list of major innovations introduced last month in Russia, namely a single production relying heavily on 1080p, UHD, HDR, and immersive sound, there is still plenty of work to be done.

“The tournament was a great success and, while I know there might be a tendency to think of the FIFA Confederations Cup 2017 as a test event for the FIFA World Cup, it’s actually a huge event in its own right,” says Florin Mitu, Head of Host Broadcast Production at FIFA.

“The world was watching and we had 84 rights holders, 90 non-rights holders, more than 2,000 accredited TV representatives, and a host broadcast staff of more than 800 onsite. These numbers speak for themselves and it’s without doubt one of our biggest tournament operations.”

The FIFA Confederations Cup took place across four stadiums with the Zenit Arena in St. Petersburg acting as host to the International Broadcast Coordination Center (IBCC), and serving as test bed for the porta-cabins, technical infrastructure and workflows which the FIFA host broadcast production team will call home at each of the 12 stadia for next year’s World Cup. ARD/ZDF, Fox Sports, Telemundo, NHK, TV Globo Brazil, Megavision Chile, and DirecTV LATAM were onsite at the IBCC sharing a total space of approximately 900 square meters.

“There are many novelties including this being the first FIFA tournament to be covered in ‘Progressive’ across all venues,” says Mitu. “In Saint Petersburg, we tested the hybrid UHD/HDR/1080p setup that will be expanded across all 64 matches of the FIFA World Cup next year. For the very first time, a single production chain will deliver multiple formats (UHD, 1080p and 1080i) at a major football tournament, so this is cutting-edge! The use of progressive and HDR will guarantee improved image quality for all rights holders, regardless of their delivery format.”

In recent months, there has been increasing industry interest in 1080p HDR as the primary production format and the innovations made by FIFA and HBS will no doubt further boost the trend towards both 1080p HDR and UHD HDR.

As an example, the core production of the FIFA Confederations Cup final made use of five UHD HDR cameras and 15 HD HDR cameras (all using the Slog-3 gamma curve) as well as HD SDR cameras. Moreover, the HDRC-4000 production converter was put to great use to help convert HD SDR and HD HDR signals into UHD HDR signals while the FIFA MAX server operated in 1080p mode. “We were extremely pleased and can clearly see the benefits of HDR,” says Jörg Sander, HBS chief technical officer.

An interesting change in the production of the matches was the decision to replace the HDC-4300 on camera one position, with a F55 camera equipped with a Cabrio lens – from the beginning of the tournament. The latter combination was used for the Virtual Reality (VR) production and an analysis following the opening match showed that the F55/Cabrio system created less noisy images than the HDC-4300 camera. Considering camera one’s position didn’t require a zoom lens, it was possible to make the move without compromising the quality of production.

To help ensure the HDR production really shone, there was a dedicated colour grader making sure the camera shaders were working with SDR, as well as having the iris at the correct setting so that the 14 stops of high dynamic range did not result in blown-out images. FIFA’s plan is to have two colour graders working at the IBC next summer.

“The cameras provide one UHD output and another at 1080p and then the vision mixer is clever enough to handle all of the UHD and 1080p signals to output different formats. Next year at the IBC in Moscow the MRLs will be able to get whatever format they want while the satellite distribution will be done at 1080i, as that is what most rights holders want. However, those at the IBC can take either the UHD or 1080p feeds and send it back in whatever format they want,” Mitu adds.

Another big move is that the production will no longer be 4:3 safe. Unfortunately, this will require some MRLs to letterbox their coverage but, on the positive side, it will better meet the needs of those who want graphics and other elements to take advantage of the full 16:9 canvas.

Audio was also in line for some interesting improvements, as immersive audio will play a big part in the 2018 FIFA World Cup next year. An automated microphone tracking system was put to use, thereby opening the door to a new way of handling effects mixing. The system ties together player and ball tracking data with an audio mixer, so that microphone recording levels can rise and fall automatically depending on their proximity to the ball and the players.

Another element which keeps evolving is infotainment or in-stadium video production. At the FIFA Confederations Cup in Russia a centralised production philosophy was tested, with a view to giant screen content being potentially produced from the IBC next year.

Additional features tested included: aerial coverage, which will be offered during the pre-match, half-time, and post-match coverage of every match next year; augmented reality graphics for player line-ups; and VR, which gained a lot of interest from the rights holders.

One of the most talked about features of the FIFA Confederations Cup, however, was the live trial of Video Assistant Referees (VAR). The technology can be applied in relation to four types of potentially match-changing decisions or incidents: goals, penalties, direct red cards, and mistaken identity. “We are working closely together with our colleagues from the FIFA Football Technology Innovation department and the FIFA Refereeing department to fine-tune the on-air coverage of the VAR moments,” says Mitu.

FIFA and HBS are committed to pushing the envelope and rolling out the most innovative and advanced technology in the world of sports broadcasting. With the foundations now set, the 2018 FIFA World Cup Russia will no doubt be a spectacular event not only for football fans around the world, but for those involved in operations and beyond.