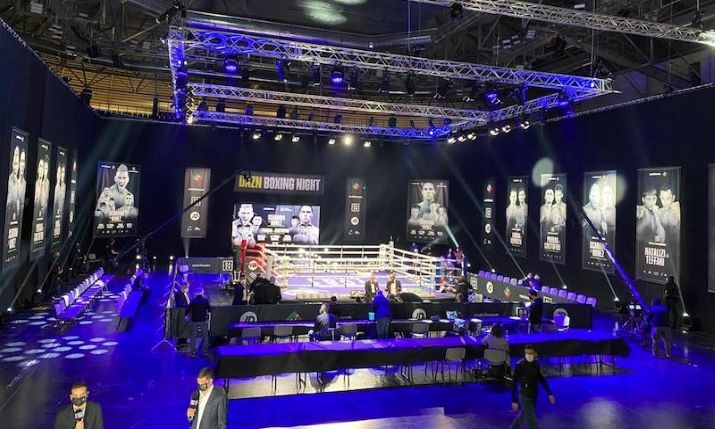 The main event saw Daniele Scardina meet Cesar Nunez, on a card with two more title fights. DAZN managed both the coverage of the world feed and the national feed with production entrusted to Cinevideo at the event which took place on 26 February.

Cinevideo’s 12 metre Dolphin 7.0 truck was called into action to produce the feeds for DAZN, with both onboard galleries ready for action on the night. 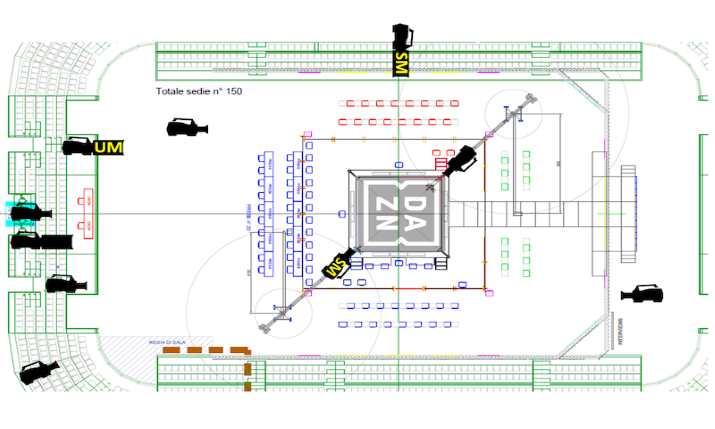 Cinevideo’s Giovanni Lorini, a well-known crew chief and with proven experience in the national and international broadcast world, explains the camera set up: “Due to COVID-19, the camera plan had to be completely revisited for the event. Instead of arranging the typical two-shoulder cameras next to the ring, two Jimmy-Jibs were used, one of which was equipped for super slow-motion shooting.”

“The test of using UltraEmotion carried out here gave excellent results, in fact for each round about 15 minutes of material was produced. Obviously this was not aired in full, but it is precious material that is very useful in many subsequent phases like post production, such as in the creation of highlights, station breaks, promos, etc, and for marketing in general beyond the event”

DAZN decided to use seven shooting points on the international feed, two of which were super motion and – for the first time in Italy in this sport – a Cinevideo UltraEmotion camera at 500 frames per second was used.

Cameras one and two were positioned along one side of the ring to film the long shot and the narrow shot of the match, respectively. The two Jimmy-Jib crane mounts were then placed at the corners of the ring and one was equipped with a super-motion camera.

Another camera was positioned at 90° to the ring and equipped with a long lens and super motion. 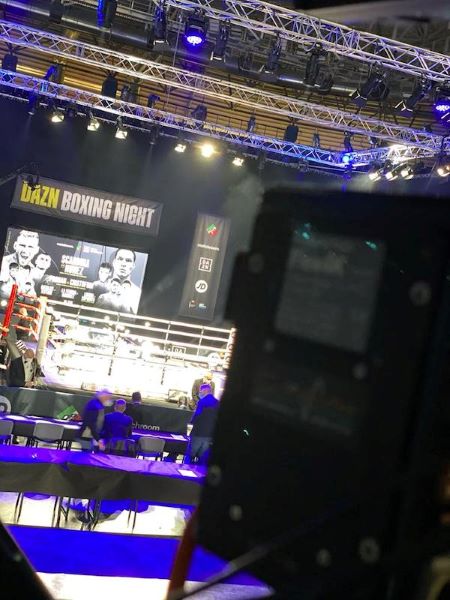 Cameras used included Sony HDC-4300 with 95x zoom Canon lenses in the stands, for the 90° camera and for the UltraEmotion

The UltraEmotion camera was positioned at 45°, between the main and 90° cameras, giving full, 360° views around the ring. In addition, an elevated ‘beauty camera’ returned a wide shot of the whole ring and of the setting in general. The ring itself was actually isolated thanks to the presence of black sheets, creating a dark box of great scenic effect.

Cinevideo also generated custom footage for DAZN, which required three additional cameras. Among these, one focused on the commentators, one moved around the locker room area to record the preparation of the boxers and the interviews before and after the match, while the third shot the presenter and an additional reporter who presented and introduced all matches from a station at ringside.

The cameras used were the Sony HDC-4300 with 95x zoom Canon lenses in the stands, for the 90° camera and for the UltraEmotion. Each of the HDC-4300s can work in HDR both S-log and HLG or PQ (not used in this event) and with shooting speeds up to 3x, some even with 8x speed.

Canon wide-angle cameras were mounted on the Jimmy-Jibs and for the beauty camera, while on main camera one a 17×6.2 lens was used.

Cinevideo provided two slow-motion operators for the world feed and one for UltraEmotion as a replay, while two dedicated operators handled the national feed.

Communications also proved technically demanding, with all referees and coaches for each match wearing microphones. Even the floor manager, in charge of following all the stages of preparation for the meetings from the inside and giving feedback to the director in terms of timing, was reached by communications managed through Riedel’s Bolero.

COVID-19 restrictions also meant that normal rules didn’t apply within the OB truck. Lorini adds: “The operational flexibility of Dolphin 7.0 allowed us to overturn the typical operating procedure of a double gallery onboard. In fact, in complete agreement with DAZN, it was decided to use the main gallery to generate the unilateral feed, given the presence of a lot of staff, operators, journalists, a director, technicians, etc, so as to be able to respect interpersonal distances imposed by the pandemic. The secondary gallery was used for the world feed which involved only a director, a graphic operator and an English producer.” 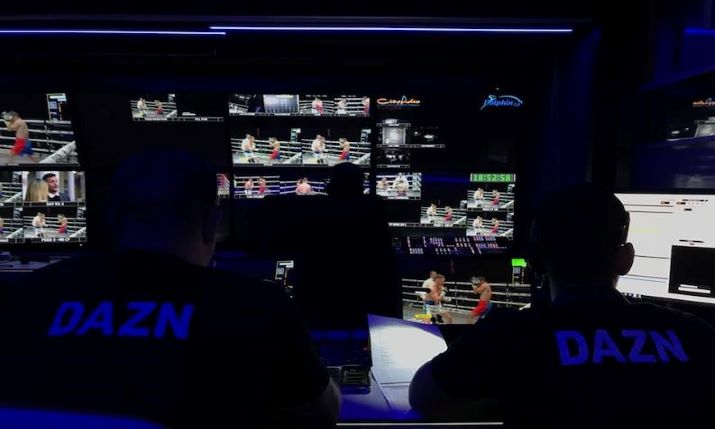 Each dedicated station onboard Dolphin 7.0 was isolated with plexiglass screens and all sanitisation procedures were respected

The large size of Dolphin 7.0 also allowed some guests to board during production, while complying with all COVID-19 regulations.

Each dedicated station onboard was isolated with plexiglass screens and all sanitisation procedures were respected. This included daily sterilisation with ultraviolet lamps, sanitisation of headphones, earphones, direction and camera operator microphones, as well as the microphones used for interviews.

Another point of interest onboard Dolphin 7.0 is the extensive use of Calrec stage boxes for audio and Riedel Micron and MediorNet for video and data. It is a system that allows a great simplification of work by transferring all signal distribution to optical fibre.

Lorini adds: “Between rounds, boxing allows us to broadcast the replay inserts in super slow motion showcasing the best moments of the match. The test of using UltraEmotion carried out here gave excellent results, in fact for each round about 15 minutes of material was produced. Obviously this was not aired in full, but it is precious material that is very useful in many subsequent phases like post production, such as in the creation of highlights, station breaks, promos, etc, and for marketing in general beyond the event.”