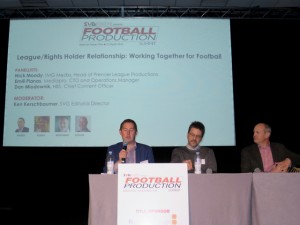 Head of Premier League Productions for IMG Media Nick Moody gave a fascinating insight into preparations for future broadcast coverage of the Premier League during a discussion entitled ‘League/Rights Holders: Working Together for Football’ at SVG Europe’s Football Production Summit, which took place in Paris on 23 March.

“We are in the middle of a lot of different RFPs for the different areas of our business, the big one being satellite distribution for all 180 games and we are currently in the process of concluding that,” said Moody. “It’s very competitive, which is great. We started the process in November. We gave everybody the opportunity to come in and show us what they thought the future would be for satellite transmission. We spoke about IP and we might use some of that technology for the new term, most probably as added value for the Premier League channel.”

Nick Moody also indicated that IMG Media was in the middle of renewing its contract with a network provider for the fibre network it has with every Premier League club. “This is going to give us a lot of opportunities to get more footage out to the broadcasters next year,” he said.

IMG is also working with a new graphic design company, which is preparing a novel brand for the Premier League: “It’s very exciting because we are creating a new look, as well as ethos and culture. It’s all about changing the perception of the Premier League which, especially in the UK, is portrayed as paying the players too much money. The graphics will be very different from what you’ve seen on the Premier League before.”

A new set is also on the cards, with the appointment of a company based on the West Coast of America, as well as a new service provider selected for all the unilateral infrastructure on the different game sites. “We will have five new OB trucks built for the games,” said Moody.

He also said that IMG would be offering some UHD content next season and that a number of tests had been carried out during this season. “We have to provide for our 10 to 15 more forward-thinking licensees, but also for the less fortunate guys, so it’s all about reaching a sort of balance. We sent out a survey to all our 82 licensees at the end of last summer asking about the interest for UHD, and the impression we got from the huge majority of broadcasters is that they are not banging our door down. The take up, so far, is still fairly small.”

Emili Planas, the CTO and operations manager for Mediapro, gave pointers on  the adoption of new production technology for La Liga in Spain: “We want to change the perception that the Liga is one of the best football leagues in the world but that the production side does not meet the same standards. We want to add features to our production process. As a service provider to the Liga, we are working towards increasing the quality of our productions. That means better installations in the stadium, better positions for our cameras, better housing for our networking equipment. It also means more cameras, more superslomos, more mini-cameras, and better TV compounds wherever possible.” He also revealed that four new skycams would be added, in four different stadiums. “One will in the Barcelona stadium and the other in the Real Madrid one. We still haven’t decided which two other stadiums will be kitted out with  the technology, whether Valencia or Sevilla or any other club.”

He also said that one or two UHD productions were likely next season, even if the final decision was yet to be made. A new OB van has been equipped with UHD kit and the company is prepared for the challenge, noted Planas.

Dan Miodownik, chief content officer at HBS, gave the lowdown on the Copa America, which will partly clash with the EURO 2016 Championship. “We are the host broadcaster. I think we were awarded the contract partly because the biggest technology innovations in football production come from Europe. Video clips, additional content… all that is becoming a hallmark for this type of event. The final will be broadcast in 4K with an attempt to harmonise the coverage in HD and UHD. There are still a lot of question marks about the technology, whether you are a producer on the content creation side or on the operational side. [For instance] how do you make it work when you have one product coming out of a truck?”

As for HDR, the panel agreed that it looked great in an OB truck but the problem was that the audience couldn’t receive it. Miodownik also pointed out some backward-compatibility issues.

Remote production of football games is already widely used in Spain. Noted Planas: “We provide a lot of additional content for the Liga on Youtube and other screens, and to do that for every match of the Liga, both first and second division, we need to reduce costs. We are therefore producing around 10 Liga games remotely per week. Each of our 41 stadiums is equipped with two lines and IP connectivity with around 1 GB capability.”

The company produces the matches remotely from Barcelona, where “six galleries are devoted to remote production”.  The company has seven OB trucks which can work remotely, although three of these trucks can be sent on location to produce locally. According to Planas, the remote technology has increased the technicians’ level of competency, because instead of producing one game every two weeks they deliver ten each week.