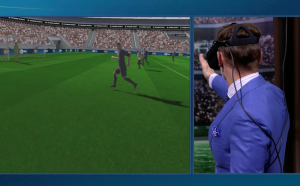 The recent Eredivisie league match in the Netherlands between Feyenoord Rotterdam and PSV Eindhoven – which resulted in a 2-1 victory for Feyenoord – provided an occasion for FOX Sports to trial its new virtual camera system. Designed to put Dutch football fans in the heart of the match as never before, the footage was available online via FOX Sports 7 and social video platform Twitch.

In development for more than a year, the system was created in partnership with Beyond Sports and ChyronHego. The project has had three primary objectives: live integration of a virtual camera in a regular football broadcast, with a camera operative who is ‘flying’ in a virtual stadium; analysis in the studio in VR; and the live stream of an automatic camera that moves with the ball and players.

The starting point, recalls Henk van Meerkkerk, Head of Production FOX Sports in Holland, was wondering “what would happen if you sent data from the TRACAB [ChyronHego advanced camera-based player and ball tracking] system to the graphics engine. It would enable you to know the position and the speed of the players, allowing you to add animation to it and create a virtual live stadium.”

The initial tests were conducted in early 2016 and attracted “very positive comments” from football fans. Further refinements were made, as a result of which it was also possible “to do some replays as well”, says Meerkkerk. 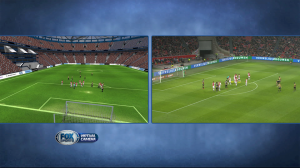 For the Feyenoord and PSV match, the TRACAB system sent all the data on the game via FTP to the FOX Sports studios, “where the graphics engine recognises the data [it can] and automatically creates an animation in line with the live data. But because we wanted to make it look better, and since the system does not recognise the kicking of the ball or a goalie diving, for example, we prepare all kinds of animations [in advance].”

Two versions of the virtual camera feed were created – one with a delay of four frames, and the other with a delay of 15 seconds, allowing the remaining data “to be filled in by the computer”. The latter was used for the online channel FOX Sports 7 (complete with bespoke commentary) and the social video platform Twitch. Viewing figures on the former were in the region of 6,000, while Twitch viewership was a little short of 20,000. Factor in all ‘traditional’ outlets and the total Dutch viewing figure for the game stood at 826,000.

Van Meerkkerk says the trial “went extremely well; we were very happy with the way things worked out. We had a few problems with the confetti on the pitch, which meant the automatic camera had trouble recognising the ball on occasion as it seemed as if there were a lot of balls on the pitch! It was a very fast game, so as the match went on it became clear that we [would not be able to put out the virtual camera feed as live], which was a bit of a pity.”

But as well as being made available with a delay, it was also accessible to the analysts in the studio in a full VR representation. Even with everything working as planned, the viewer at home “will still only be watching in 2D [on their TVs], and it is clear that the only way they can really get to experience what the analyst in the studio is doing is via the creation of a FOX Sports VR app for the consumer.”

The virtual camera continues FOX Sports’ tradition of innovative production methods, including a cameraman jumping from a helicopter, the match ball being delivered with a base jump, and images of the players’ entrance at Feyenoord/Ajax being conveyed in footage all over the world.