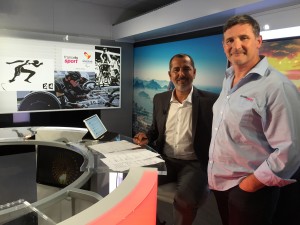 Kader Boudaoud, journalist and Frédéric Gaillard, head of production for France Télévisions on the set used during the Paralympics

For the 2016 Paralympics, the French public broadcaster undertook a notable increase in its day to day coverage. “At the London Paralympics in 2012 we only presented one hour of coverage per day. In Sochi, for the Winter Olympics, we went up to two hours. This time we offered 10 hours of live daily coverage, adding up to more than 100 hours in total,” explained Frédéric Gaillard, head of oroduction for France Télévisions.

Programmes began in the evening on France 2, France Télévision’s flagship channel, and then continued on France 4 later in the night.

“We received 15 feeds from three beauty cameras and about a dozen signals from various other events. Thanks to the hub installed in our offices at the IBC we could pre-direct the signals transmitted to Paris. In fact, five were streamed directly to France, whereas the others were pre-recorded with live commentary for deferred broadcasting from the sites or the IBC studio.”

The set-up was somewhat downsized compared to the Olympic Games. Staff on site went down from around 240 people during the Olympic Games to about 30 during the Paralympics. Handisport (Adaptive Sports) consultants were present to advise journalists; in France sports for the disabled are known as ‘handisport’. Olympic stars like Stéphane Diagana and the Judoka Lucie Décosse were also on hand to talk about their sports. This time there was no studio at the France Club, but instead a 30sqm studio in the IBC was used and equipped with three Sony DHC-1500 cameras. The TV studio was specially designed by François Lemaure for the Paralympics.

There were also two teams of video journalists, one for the France 2 news bulletin and one for the France Télévisions sports programming. In addition, there was a team from the renowned Sunday sports programme Stade 2, who came to Rio especially to film a documentary they are making about the Belgian athlete Marieke Vervoort, who won the Silver medal for the 400m wheelchair event and Bronze for the 100m event.

Frédéric Gaillard added: “For our on-site editing needs, we had access to two Avid Media Composer 10 workstations on a network share. As was the case for the Olympic Games, we could record four feeds on the servers in addition to the ones sent to Paris, in order to enrich edited content. We had a JPEG 2000 fibre optic connection with a dedicated bandwidth of 100mbps for talkback communication as well as telephone calls.”

France Télévisions reports that audience ratings were very good with a peak of 1.5 million viewers from the first days of the competition. Between 1am and 4am the audience numbers were on a level with those achieved during the Olympic Games.