From secretary to senior director: Sky Sports’ Sara Chenery on her meteoric rise through the ranks 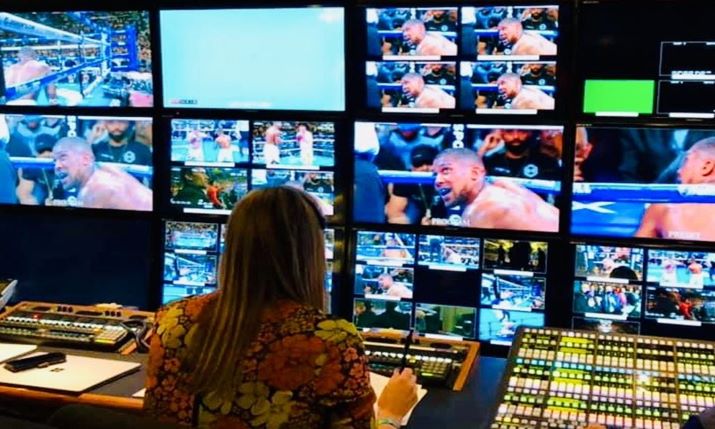 “At 17 I was secretary to the head of business development and director of marketing for a year or so, before I offered to look after guests at an outside broadcast in my own time. As soon as I saw a gallery I knew I wanted to direct. I loved the energy and passion that live telly brings.

“I absolutely love directing,” she goes on. “It’s just a privilege. Being part of the process that brings a story to life on screen is second to none. I really enjoy being a team lead; we have a great team of talented people who work hard to support each other and deliver high-class output. It’s always a good feeling when you know you have made someone’s work life better, by taking the time to listen or to offer guidance.”

Fast-forward from school to Sky

On how Chenery first got into broadcasting, she began just days after leaving school. “I decided to take a year out off the back of my A Levels. My Dad was a chauffeur for Sky at the time. It was back in 1992 and Sky was a very different place to what it is now. They had two new executives who had no secretary. Dad knew I had done shorthand and typing and put my name forward…fast-forward a few days and I had my last college exam on the Tuesday and started work on at Sky two days later.

“I was petrified when I first came into Sky. One day I was taking my exams and a couple of days later I was answering the phone to household names and taking shorthand minutes in a high-powered meeting!”

“You absolutely have to thrive on chaos – organised chaos of course! I still get butterflies when I hear the 10 second countdown to air; I don’t ever want to lose that!”

Chenery has always been focused and that has helped her push her career at Sky forwards over the years that she has been there. She explains her trajectory: “I moved over as a production secretary (only girls did that role at the time!) and worked to upskill at every opportunity.

“The next step was editorial assistant on Soccer Saturday (first covering for someone who was ill and then stepping into the roll permanently), coordinating the live football reports. Then I was promoted to assistant producer creating all features, short documentaries and promos.  Soccer Saturday was a great show, because we always had a different live sport featuring, so we had experience of so many different sports – synchronised swimming, table football, beach volleyball, cricket, rugby, tennis – we had so much variety!

“Then while on a shoot I had the opportunity to link together a couple of cameras on-site with a vision mixing desk and that was my first introduction to directing,” she goes on. “I moved over to boxing as an associate producer in 1996, and whilst helping out on Naseem Hamed’s fight in Dublin I realised how brilliant OBs were! I love multitasking and it was wonderful to see how everyone came together for that live broadcast. I was absolutely mesmerised.” 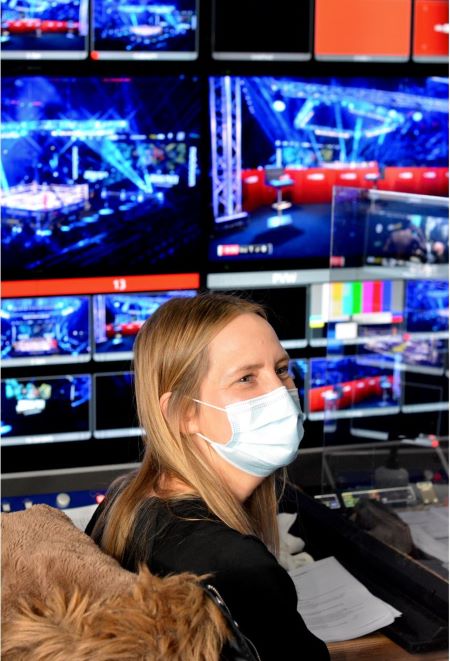 Sky Sports’ Sara Chenery says, “In 2000 I started to direct undercard fights and then moved on to directing the live shows. Since then, no two shows have been the same and I absolutely love directing”

Chenery moved onto VT directing by chance, when then assistant producer Adam Smith – now head of boxing development – was caught up backstage and could not get back to the trucks. This opened up a new world for her.

She says: “VT directing replays was the best job I could have imagined; watching the fight from different angles and coordinating all the content was an absolute adrenaline rush. I continued to work on boxing as well as other sports to get more experience. Again, in my own time I had a go at a variety of crafts to understand how tricky they were: camera operating, floor managing, vision mixing and attempting to fade up the right microphones as the boxers moved around the ring!”

Directing has remained Chenery’s passion. “In 2000 I started to direct undercard fights and then moved on to directing the live shows. Since then, no two shows have been the same and I absolutely love directing. I’ve worked on some challenging events and some emotional ones, but they have all been equally rewarding.”

Chenery was almost where she wanted to be; she applied for the role of senior director in 2017 and was successful. She comments: “I really enjoyed the new challenge of having direct reports as well as still directing myself. A year later the opportunity to become one of two team leads in the department came up and I was really pleased to get the role.

“I’ve now directed most sports over the years at Sky and from OBs including athletics, ping pong, greyhound racing, badminton and netball, but boxing is always my favourite for the sheer unpredictability of it.”

She has worked on so many boxing events that she has a lot of favourite moments: “I’ve directed boxing OBs in Monaco, New York, Las Vegas, Saudi Arabia, Gibraltar and Germany and each of those events have had their own challenges and rewards.

“There have been so many boxing moments; I’ve directed every AJ [Anthony Joshua] fight, with the exception of his loss in New York, and that makes me very proud. Froch versus Groves at Wembley was the most challenging; we had to rig overnight off the back of a football event. We’d done an overnight dry run, transforming the pitch, but it had never been done before and it was pretty nerve racking. George Groves insisting on a bus for his ringwalk just added to the mayhem. I think there were a couple of inches clearance to drive it in!

“Tony Bellew’s win at his beloved Goodison Park was a real moment.  The look in his eyes when we played his ringwalk music after his win was priceless,” she continues. “We then got on a coach and travelled as a team to Liverpool for another live show the next night. A brilliant road trip.”

Being part of the Sky Sports team is something that Chenery truly values. She explains: “I’ve always felt so proud to tell people that I’m part of the Sky Sports team. People ask me how I can have worked at the same company for 30 years, and I always say I haven’t! It feels like I’ve worked for about 10 companies, because Sky is constantly evolving and adapting. One thing you’ll never do is get bored.

“Together with the Sky Production Services team at Sky we reinvented the way boxing is filmed, bringing our viewers closer to the action as we brought in a ringside jib camera replacing the previous long lens coverage. Being a director is a very easy job when you are surrounded by so many talented individuals.”

Without Sky, Chenery’s career would have been very different. She states: “Sky has always been a place where you can literally be anything you want to be. I’d have never got the same opportunities elsewhere back in 1992 without getting a degree first. The ethos at Sky was to give it a go and learn as much as you could. I’d work on days off and shadow people to put myself in the best place possible when an opportunity came up. Sky has always thrived on teamwork and people recognised you for trying to help and when the opportunities came up it was just a question of being brave enough to give it a go.”

“The energy and drive of the people,” at Sky Sports is what keeps Chenery in a career in sports broadcasting. She goes on: “You absolutely have to thrive on chaos – organised chaos of course! I still get butterflies when I hear the 10-second countdown to air; I don’t ever want to lose that! 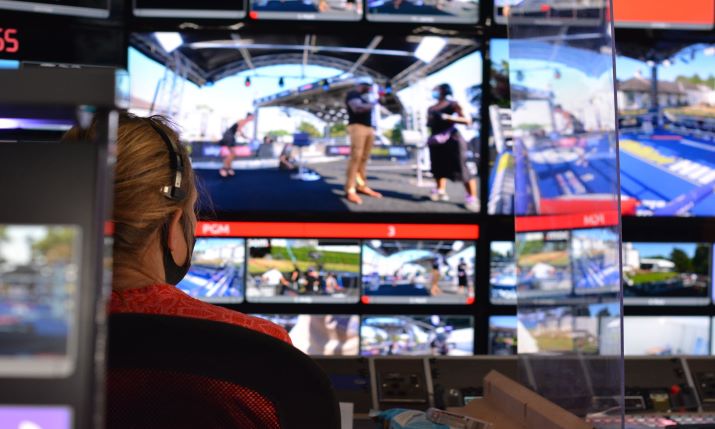 “When I see how my 12-year-old daughter Gracie believes she can be absolutely anything she wants to be, I feel glad that she’s seen women have the same opportunities as men when choosing their career,” Chenery adds.

Chenery adds that it is important to be proactive in helping young people get into a career in broadcasting. She explains: “I’m a trustee of MAMA Youth Project, a charity that transforms the lives of young people who haven’t had the same educational or work experience opportunities. What they do is inspirational and ensures that the playing field is fairer for everyone. 96% of MAMA Youth Project graduates are still in sustained employment within the media industry.

“Mentoring some of the students has shown me just how hard it is to get into TV. It’s just so tough for people to get the opportunity to showcase their talent. That’s why it’s great that Sky has so many initiatives to kick start careers in the media.”

“I’m lucky enough to see many talented women around me at Sky and I’ve given advice to quite a few, as well as taken a lot myself. It will always be to believe in yourself. Imposter syndrome is something I really struggled with and that can be difficult when you are surrounded by lots of confident people. Try not to worry so much about everything you can’t do and concentrate on what you can offer. Always evaluate what your choices were and be better next time. Remember to pay it forward; there is always someone else struggling who needs a confidence boost or an alternative view.

“You don’t need to be a manager to give an opinion or support your team mates. Someone once told me, “there’s always a solution, you just need to find it,” and that’s what the little voice in my head says to me during those stressful moments!

“Just be genuine, authentic, and most importantly be yourself.”

After the last two years, 2022 holds a lot of promise, says Chenery: “2022 is an exciting year as we move on and see what innovations and technologies we can bring into our coverage. We are always looking for the next exciting addition to coverage – big or small – and it’s fun trying out new thoughts and ideas, even if they don’t always work!”