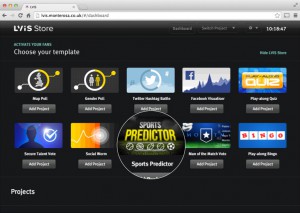 France Télévisions, the state public French broadcaster, has licensed the Monterosa LViS Sports Predictor app from the LViS Store and is customising it to create its own game, A Vous de Jouer (Your Turn To Play). The app is set to launch this Sunday (25 May) alongside its coverage of the Roland Garros French Open.

LViS Store, which launched earlier this month, offers the benefit of ready-made apps, so that media owners and marketing teams can activate branded interaction without the time or cost of creating the app from scratch.

As an activation for the event’s TV sponsors, France Télévisions has customised A Vous de Jouer to engage audiences more deeply in real-time prediction gaming and opinion polling whilst enjoying the tennis coverage.

The game has been designed not to distract from the key moments in the game so calls to action have been specifically timed to push out in the natural pauses. The social companion works alongside both TV coverage and France Télévisions’ live online streaming, yielding a rich but light-touch game devised to see if the user can climb the ranks from lowly beginner who’s just picked up a racket for the first time, to certified tennis legend. There are 15 levels to reach during your “career”, with exclusive prizes on offer for every level from Samsung TVs to tablets, iPhones and X Boxes.

Olivier Lendresse, director of sport at France Télévisions, comments: “We’ve worked with Monterosa to create a great way to engage tennis fans during the live event. Using the LViS Sports Predictor App has helped us deliver the product rapidly and at scale. Our Social TV producers will be dedicated to driving content including predictions, trivia questions and other social media content for audiences, and we’re very excited to see the effect it will have with fans who watch the live stream and on TV.”

Tom McDonnell, CEO of Monterosa, adds: “Sports Predictor, part of the new LViS Store, is an engaging HTML5 app that fans of any sport can play while they’re watching. It helps broadcasters increase value and association with sponsors, drive data capture, and increase social reach with a quick-to-deploy app that works with existing sites and mobile apps. Most importantly, it makes any sport more enjoyable for fans without detracting from the action.”