FutureSPORT 2019: Inside look at the future of contribution and distribution 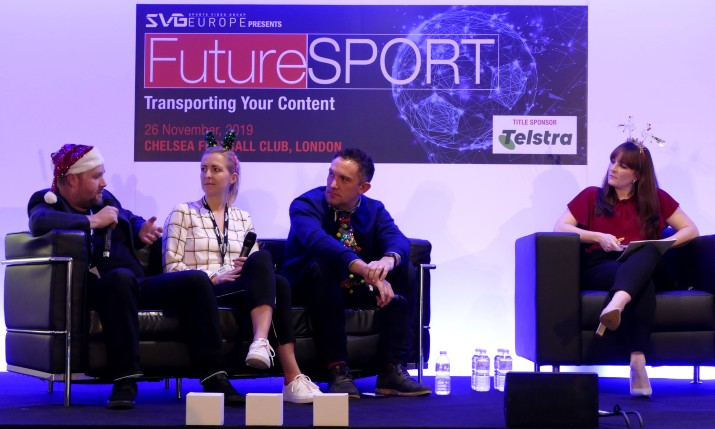 FutureSPORT 2019 kicked off with a state of the nation panel that looked at some of the key issues and trends in sports signal contribution and distribution. And thanks to a game show format the panellists were able to cover a wide range of topics and offer up thought-provoking answers. Below are some of the highlights from the session which was hosted by journalist and broadcaster Natalie Quirk.

John Currie, Gravity Media, head of technology, on relying  on the public internet for contribution and distribution of live sports content: “You probably are not going to deliver your Champions League Final or your Wimbledon Final over the internet, but I guess some of the lower tier stuff is probably going to be okay. It’s certainly a viable backup.”

Sarah Adams, Sky Production Services, senior technical supervisor, on the impact UHD and HDR have on live sports contribution and distribution: “You need to make sure that all your deliverables are to the highest quality as you’re not compromising one for the other. It obviously requires a lot more resources and there’s a lot more to contend with, which has impacts on costs and skill shortage and things like that at the moment.” 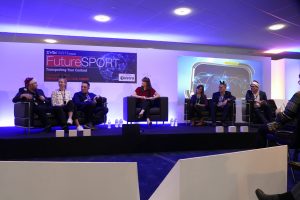 Panellists at FutureSport were in the Holiday spirit for a discussion of trends in contribution and distribution.

Tiana Trumpa, Deutsche Telekom, 5G product manager, on 5G and its benefits to the sports industry: “There will be some opportunities to replace certain infrastructures, add additional cameras and so on and so on because the infrastructure side then lies with the network operators. There are just more possibilities because there’s more capacity, more bandwidth there.”

David Shield, IMG Media, SVP, global director of engineering & technology, on disaster recovery and backup: “One example is from the Rugby World Cup as we had the biggest typhoon Tokyo has had for 50 years and it forced us to actually turn the IBC off. We tested our IBC down scenario as if for real. We still had a match that was happening 500 miles away unaffected, but we needed to get it out to the world. Luckily, we had the satellite backup with our fiber contribution circuits able to downlink that outside of the country and get at least the world feed or around the world. We stopped the part doing a backup for highlights. So, we actually tested something we hoped we’d never have to do.”

Ross Kemp, BBC, head of connectivity architecture, on the impact OTT has had on contribution and distribution workflows and what can be done to ensure that the industry is able to cope as this demand grows: “From our point of view, we’re seeing a huge increase in the quality of demand of over the top services. Say for instance, we want to see higher quality streams for streaming, but what we’re seeing in parallel, and I think the challenge for us as building out is also the variety of services. There’s more of a requirement now for more sport to be covered. Some more niche sports and so on, which really challenges us in terms of do we cover things more thinly or do we push more towards remote production type infrastructure. What I will single out actually as being connectivity is connectivity into venues. We really do need to see an increase in quality and variety of the types of connectivity in and out of venues that we get because if we’re going to serve this increase in demand, then we really need a lot of options in order to get reliable material out.” 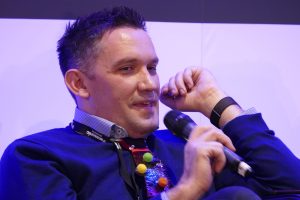 Tom Giles, AELTC, broadcast technical manager, on piracy and security and its impact on contribution and distribution: “From a contribution and a distribution point of view, we’re pretty secure, diverse, et cetera, on the contribution side. We partner up with Eurovision who obviously is right at the leading edge in terms of getting that content secure to partners. But also, people are just putting things up on Facebook live or on illegal streams, et cetera. It’s a massive focus, of course, because if you’re asking people as a federation or governing body to put in large rights fees, then we need to support them to make sure that the content’s safe.”

Currie on the biggest contribution or distribution challenge that Gravity Media faced while working on the FIFA Women’s World Cup this past summer: “It was more internal, getting content back from wherever we were as we were roaming around following teams and we were outside of the stadiums where connectivity was pretty good. We were saved by 4G bonded cellular.”

Adams on remote production of English football league matches and lessons learned: “We have to work in a gallery that is in a fixed location but with an OB environment. So, we’re combining two workflows and have to merge the two and bring them together to make sure everyone’s happy, able to work together, and can get used to it. Everyone’s got a lot to learn. There’s a lot of different roles that have expanded and there’s new roles that have been created. It’s just bringing them in and making sure everyone’s still aware of what they have to do, but just in a different environment.” 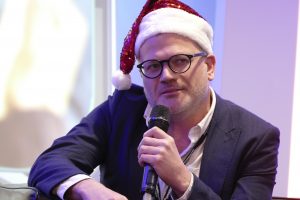 Kemp on BBC’s move to IP: “Across the country we’ve got 84 sites that do some kind of broadcast activity for us and then five disparate networks connecting them. The future’s going to change more quickly, and we’re going to go all IP underneath and use SMPTE ST 2110 standards for video encoding, audio encoding, and so on and so forth. In order to cleanly migrate onto the new platforms, we basically made IP look like what the old networks look like from the point of view of the endpoints. That was two years ago, and we were able to do a clean migration without losing stuff. We’re not pushing as hard as I would like in taking advantage of the flexibility of the network that we’ve got underneath just yet but I’m certain that’s going to come. I’m even more keen when talking about, for instance OTT and some of the increasing numbers of sport we’re able to capture from remote locations. Being able to flex the network that we got to take a variety of formats in, pass them through, transcode them and push them out again is a network that we’ve now got underneath which is fit for purpose. So, it’s been a good experience.”

Trumpa on the use of a 5G network for coverage of the Berlin Marathon: “We didn’t really know what the network would do basically because you just can’t test that beforehand. I think that was, on the one hand, challenging. But on the other hand, it was very beneficial for us because we gained so many insights. It worked pretty well already even though it was early in terms of 5Gs so there’s no network slicing yet. There was no guarantee of the bandwidth. Also, there are not so many 5G devices out there yet so that helped us in that regard.” 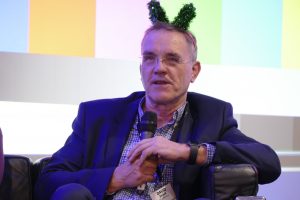 Shield on the biggest contribution and distribution challenge at the Rugby World Cup: “Japan is a big country so there is a lot of ground to cover and there was no single supplier that was already in all the venues. On distribution, things were a lot easier. We worked with Telstra to bring what was the first for Rugby World Cup, not just a world feed but a whole bouquet of multi-feeds, tactical feeds, additional content feeds. We brought them all back to London to Stockley Park which acted as a distribution hub for us.”

Shield on whether or not satellite will always have a role to play in the industry: “I think it will. Fiber is hugely reliable and generally there for you, but there’s nothing to beat satellite uplink onsite if you’ve got a valuable property as a last resort. On distribution, same thing. Sometimes, IP is quite difficult to get into, say China. They’ll have a satellite dish, but they won’t necessarily have an IP connection. So yeah, I think there’s always going to be a space for satellite.”

Giles on the increased use of 4G and the impending launch of 5G and the future of RF: “I think RF still has a place. We’ve seen a bit of activity and people trying to transfer from radio cameras, but I think there will always be a place where radio cameras.” 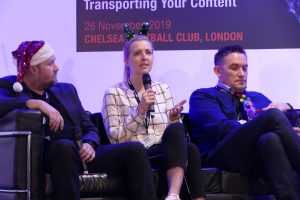 Trumpa on 5G and whether it is a game changer for contribution and distribution: “I think two things could make it a game changer even. One, it’s definitely for both contribution and distribution, so that there’s huge potential there. The other thing in terms of contribution is we would have to get network slicing right. I’d said earlier the reliability, the stability. I’ve learned now that in broadcasting, you definitely want to rely on the network as much as you possibly can. We would have to reach a 99.999% there. That’s why we’re tapping into these projects, learning the customer demand side, the broadcasting demands there and trying to get slicing right.”

Kemp on whether it is easier to teach video skills to a person from an IT background or teach IT skills to a person with a video background: “If you asked me about 10 years ago I would have said we’d take a broadcast-trained engineer and add some IT skills. But after having done an awful lot of work in building our IP within the BBC and I would now pretty much turn that on its head. I think we’re now increasingly seeing that every broadcast plan uses a bit of software running on a machine. That machine might be near, or it might be far from us. I think we should definitely be looking to the native skills in the IT industry and trying to apply the broadcast workflows. I think we’re actually at the point at which we start allowing the IT to do what it’s capable of and we’ll see the transformation that we need to see in the broadcasting industry.” 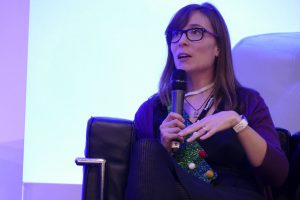 Adams on producing tier one events remotely: “As long as the infrastructure is reliable. Connectivity is not there at the moment but when we do, why not? I do think you get a certain level of production value out of attending venue. So, perhaps not for something like a Champions League Final as production wants to be in the action and they get a lot more from it. But for the lower league, Premier League, yeah, why not? You can get much more value from it, from remote.”

Currie on the challenge of monitoring multiple OTT signals: “To some extent, you’ve got to let technology do its work. Kind of like you said about the IT, the IP side of stuff. So, believing in your auto-QC style stuff and just sort of trusting that it’s going to happen. In terms of the end user monitoring, I guess I’ve seen some places where there are problems with different end user devices because obviously, you’re supporting a whole load more stuff than just a traditional linear sort of thing. And yeah, I have seen some MCRs that started to look a little bit like Currys PC world with one of every device [to make sure it looks okay on each]. I think as things get a bit more standardised, that will probably go away.”