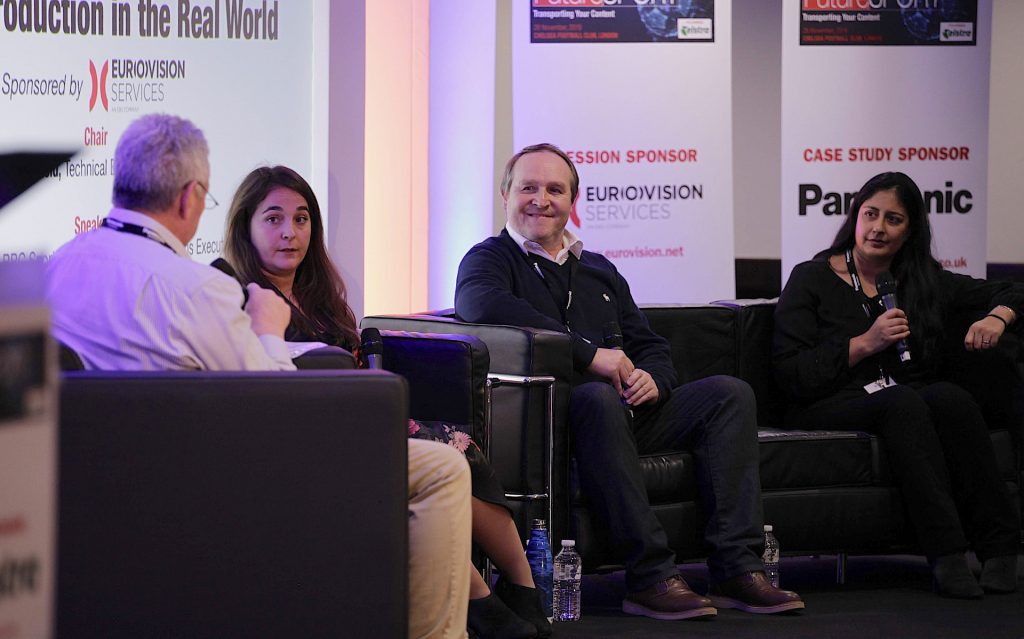 Last week’s FutureSPORT 2019 Summit was another record-breaking event for SVG Europe, with over 350 delegates in attendance at Chelsea Football Club in London. A highlight session in a packed day of content was ‘More than just Technology: Remote Production in the Real World’, which was sponsored by Eurovision Services.

Remote production is becoming almost routine for many broadcasters, as the production of some major events or seasonal leagues moves from the outside broadcast compound at the venue to a comfortable gallery back at base. At the FutureSPORT session, speakers from the BBC, Sky and SailGP revealed how ‘at home’ workflows can improve work/life balance, affect carbon footprints and offer creative benefits.

For conference host, presenter Natalie Quirk, who works on remote productions with the FA Women’s Super League, and other football coverage, BT Sport: “the biggest complement that I can give it as a reporter or presenter is my job doesn’t really change. My communication with the gallery back at Stratford is exactly the same as it would be if we were in an OB truck in the compound,” she said.

“It’s not just a tick box exercise in the contract. We’re also making sure that responsible business targets are included in the contract, keeping sustainability on the agenda at annual reviews.”

“We can also be more creative with camera work, because cameras aren’t tied to cables. We can be at more games. On the National League we can turn around a highlights programme (from all of the games that afternoon) an hour-and-a-half after the final whistle.”

Obvious benefits of remote production can be lower costs (due to sending fewer crew to an event) and increased sustainability, but “the greatest advantage […] is enhancing the value of your content,” said Michele Gosetti, head of sales and marketing at Eurovision Services, who introduced the session.

“Once you’ve extracted yourself from the boundaries of an OB van at the venue, there’s no limit in your ability to customise, repurpose and reformat your content and making the most out of it.”

“If you’ve got a small budget, you can get more for your money.” You’re not paying for hotels or flights. However, “some people feel that the editorial offer may be impacted,” said Narinder Ball, BBC Sport, outside broadcast operations executive. All three events it did in 2018 followed a similar model, with presentation and commentary on site, coming back to its galleries in Salford.

She believes that good communication links are the key to good remote production, although it can be complicated by time differences.

SailGP has just completed its first year, all as remote productions from venues across the world. It helped greatly that there were no legacy contracts or systems to deal with. “Trying to future proof ourselves for the next three, four, five years, we thought remote production was the way forward,” said Warren Jones, SailGP’s technical director.

Its first venue was Sydney, with its gallery in London, “so we made it as hard as possible for ourselves,” he said, with latency of about 160 milliseconds. It also held races in San Francisco, New York, Cowes (Isle of Wight) and Marseille, all sending 35 streams or more back to London. 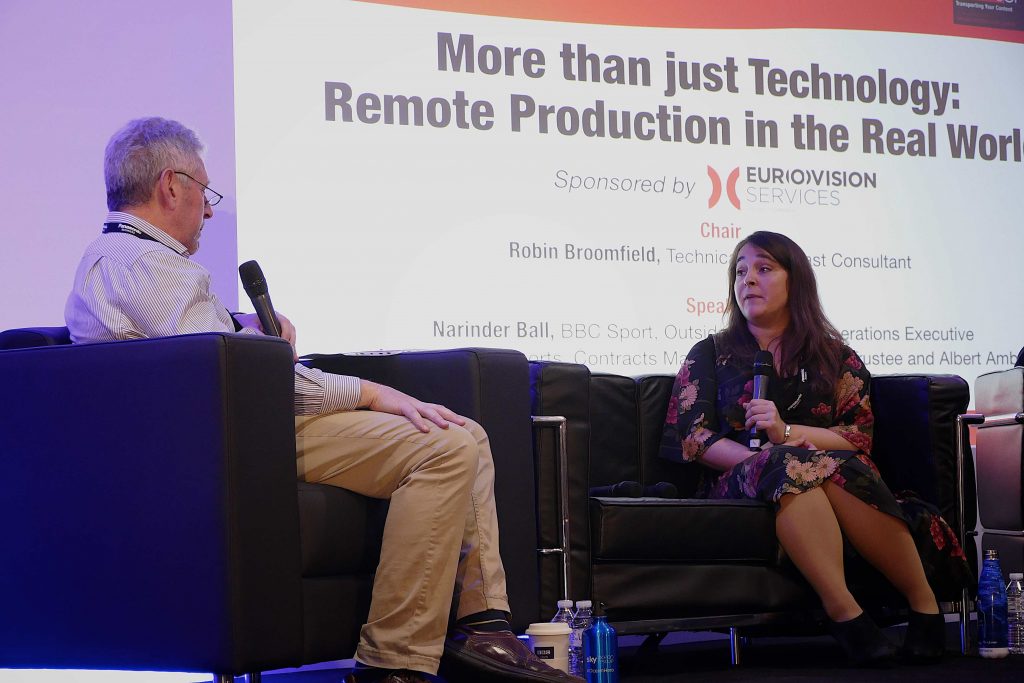 For Sky Sports it’s all about sustainability. Sky has introduced a lot of environmentally-friendly changes recently, including introducing cleaner-burning GTL (gas to liquid) fuel for generators and removing single-use plastics and coffee cups from its host productions. “Remote production is the natural next step, reducing the amount of travel. So, whenever we have new rights or an opportunity to look at whether remote production is possible – if the connectivity is there and we have the right facilities back at Sky – then it’s a no brainer to not make that move,” said Jo Finon, Sky Sports, contracts manager and albert ambassador.

Whether remote production is right for an event has to be judged for each particular case, added Ball. “One of the considerations for us and, I guess, one of the stumbling blocks, is connectivity at venues. It’s also our back-end infrastructure. You can remote things back, but we only have a certain amount of galleries and control rooms. If you have a busy summer you may not have the space,” which is where she believes the availability of centralised production facilities, such as from NEP, could come in.

SailGP has no production on site – everything goes back to London. It did start its season with on-screen presentation at the venue, but later decided to do that in London too. For the upcoming season, starting in February, “we want to cut about 20-30% of people that are on site, back to London, and we think that is achievable,” said Jones.

He doesn’t think remote production necessarily saves costs. “At the start I think it is on par with a traditional broadcast,” but he anticipates that when they return to Sydney, and use the same infrastructure, it will be cheaper.

Sky has found that “connectivity is giving us the option to be on site at events we might not have been at before,” added Finon. It is also more sustainable. “On Formula One we reduced our crew travel by 20% and freight by 25%, so that side is massive. Flying all that around the world, next year for 22 races, has a huge impact on reducing our carbon footprint,” she said. Similarly, SailGP has 100 people in London, so that is 100 flights not taken. 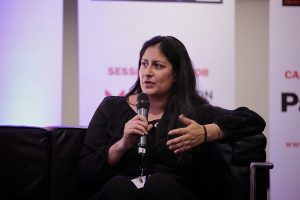 BBC Sport is now looking to do as much as it can remotely, said Ball. “It used to be that we were looking to do remote productions because we had small budgets and we were looking at innovative ways to try to bring the event to the audience, but actually the driving force now is sustainability. There is a feeling that we need to act, and we need to act together as an industry.”

For Jones, latency is key, and 160ms is too much. For events in Europe it was about 15ms, which is ideal, but the laws of physics will make this difficult to overcome for distant events.

Ball agreed that infrastructure and latency were the biggest issues. “There are places you can’t do [remote production] because the connectivity isn’t there.”

Because SailGP has dedicated bandwidth between its remote sites and London, its teams can easily talk to each other over the comms units, just like working between OB trucks.

Broadcasters have to work with suppliers to improve sustainability, said Finon. Sky has introduced responsible business questions into its Request for Proposal forms, to find out if suppliers are carbon offsetting or otherwise reducing their carbon footprints, and also if they are reducing gender pay gaps and how they are recruiting. 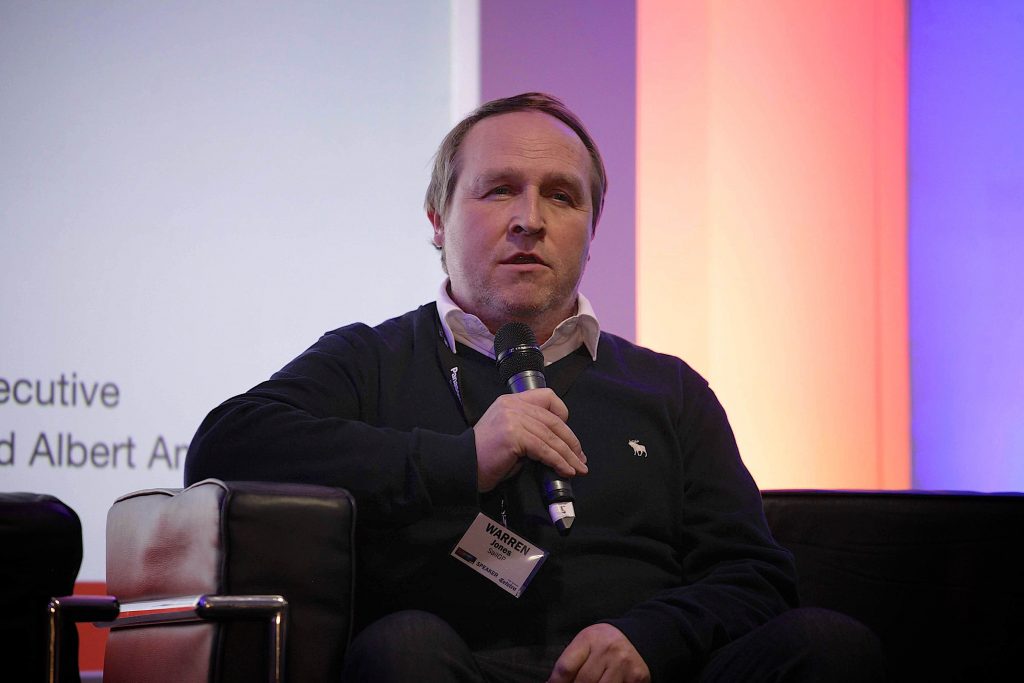 SailGP’s Warren Jones, talking about its remote production from the other side of the world

SailGP is powered by the wind, so “we need to be sustainable,” said Jones. It has no single-use plastics on site, and is one of the first sports organisations supporting the UN Climate Change Sports for Climate Action initiative.

The BBC has included sustainability in its tenders for a couple of years, but it is also important for others, such as sporting organisations or equipment manufacturers to get behind this. “We’re limited in what we can do as a broadcaster, because a lot of decisions have already been made by federations before we get to events. There could be more to be done that allows you work more collaboratively. We’re looking at sharing resources with Sky on cricket – why take two generators when you can share one,” said Ball.

Session chair Robin Broomfield asked if there are other benefits of remote production, such as the ability to retain continuity with the same production teams at base.

“Having everyone back at base does mean you have access to more resources. You can put a more polished product together. But, a lot of my editorial colleagues would argue that by not being on site they’re missing out on key things that they don’t pick up on,” said Ball.

Sky has had some “really positive feedback” from productions, such as the football Championship. “The guys aren’t wasting their time going up and down the motorway, they’re actually spending more time on the content, the storylines and actually attend meetings – because it is all within Sky,” said Finon.

“There is always going to be negativity when we make changes. Education is a really key point. We trained all our senior management in carbon literacy, which is something Albert run, and that really helps with the messaging with remote production because everyone understands then that it is really all about reducing our carbon footprint.” Albert is a broadcast environmental organisation set up by BAFTA that runs courses and certifies productions as sustainable.

Although SailGP does have fossil fuel generators, it is moving to solar power on site, and as it follows the sun around the world, it is always in places where it is likely to be sunny.

“We are talking to a lot of power companies to see what we can do to reduce our carbon footprint,” besides switching to GTL fuel to reduce the amount of pollutants emitted, “but unfortunately there isn’t that much out there at the moment,” said Finon.

Being able to work on a production remotely can significantly improve work/life balance, said Ball. “I got to work on the Winter Olympics and Commonwealth Games while based in Salford and going home to my family. It would have meant three months away for each event.” Of course, with time differences some staff work overnight, “and still don’t see their families.”

“The feedback that we’re getting from our production staff is that they prefer it this way,” said Jones, although not necessarily when SailGP took place in Sydney and they were broadcasting from 4am. However, the benefits of remote production mean “we want to push this as much as we can. Remote production works for SailGP and the way the events are around the world,” he added.

“It needs to be a partnership. It needs to be a wholesale approach. We need to do it jointly with other broadcasters, suppliers, manufacturers and federations” – Narinder Ball

It has to be right for a particular sport, said Finon, but there are a lot of little benefits of being able to work at base, such as the space available, something Sky’s EVS operators have particularly noticed, as they are usually crammed together in an OB truck.

“It doesn’t necessarily have to be the cheaper option. Even if it was a little bit more expensive it’s something we’d still look to do because of the sustainability angle. Obviously it’s still got to come within a certain budget, but it’s something that we’re all taking very seriously,” said Ball.

“It needs to be a partnership. It needs to be a wholesale approach. We need to do it jointly with other broadcasters, suppliers, manufacturers and federations,” she added.