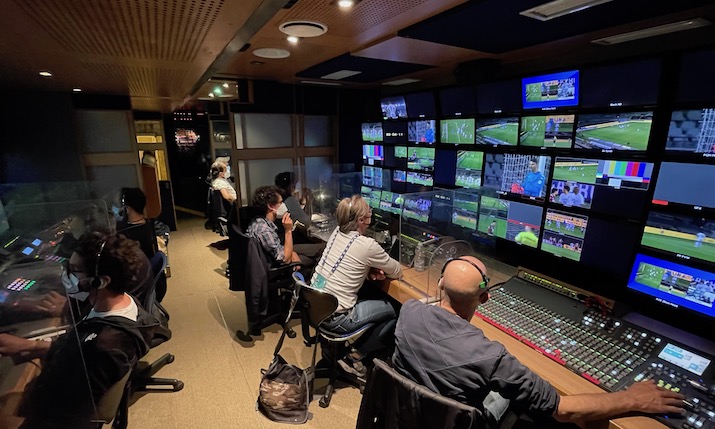 EMG company Global Production handled the complete television production of the Serie A match between Torino and Benevento on 23 May 2021 at the Olympic Stadium in Turin, generating the international feed as well as a unilateral feed for Sky Italia.

The match was produced using 12 Grass Valley LDX 80 cameras: seven with long lenses and the others with standard lenses, all placed on tripods, plus a Steadicam.

Massimiliano Anchise, sales manager of EMG in Italy, says: “The event, shot entirely in HD, provided for the simultaneous generation of the international feed and also a customisation and integration of HD1 for Sky Italia.

“This HD1 format requested by Sky includes a camera that takes personal shots and an on-board video mixer on the OB9 of Global Production that cuts off as needed the images of the unilateral camera.”

The medium-sized OB9 mobile vehicle managed camera one as a main camera high on the stands; camera two was dedicated to picking details, while the third was in a ‘flat’ position. Cameras four and five operated in super slow motion, the sixth was the Steadicam, the seventh a reverse shot and the eighth a shoulder camera positioned on the left side of the court.

Also, two of the remaining cameras were positioned on the 16-metre line, one was used as a high back goal with long optics and the final one performed tactical shots. This was also placed in the back goal, in an elevated position, and so returned the game tactics, dynamics and movements with mainly wide shots.

Thanks to a wide-angle lens, the Steadicam still managed to capture details and corner kicks, throw-ins and the player line-ups before the game, all with excellent dynamic images.

As the game was played without fans in the stands, virtual crowd audio was utilised.

In addition to virtual audio, a certain amount of spectacle related to the images was also added virtually. Netco Sports inlayed graphic inserts of a virtual audience on the images shot by camera one, and the flags and logos of the teams were ‘projected’ on the opposite stands.

Also in this case, the images from the cameras, including super slow motion takes, are delivered to the VAR, the virtual referee, to allow for real-time analysis.

OB9 operated in double configuration, as per recent production requirements where a single vehicle produces both the national and international feeds as well as the unilaterally customised one, in this case for Sky Italia.

The vehicle, which enables social distancing thanks to generous spaces on board, has three main entrances and three distinct areas: the main gallery, the second production area and the technical room control section.

The two control rooms, divided by movable walls, dissect the two discrete, independent production areas: the main one and the one dedicated to customisation complete with independent entrances and an emergency door.

On board, the control room is able to host three EVS ChannelMax production servers dedicated to the replay that can also record up to 12 channels; eight were engaged here with four operators. 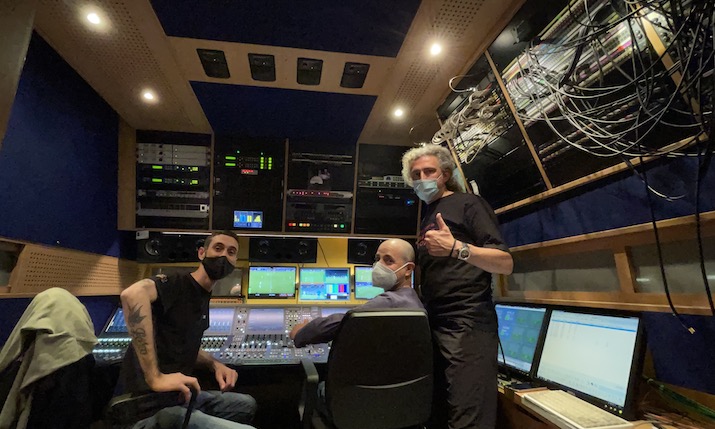 Daniele Francini, technical manager for Global Production for this event (standing), and the team

The vehicle produced two feeds in production: the national feed which is enriched on site and which is also useful as a reference and monitoring for the production in the venue; and the international clean feed which is sent via fibre to the Netco Sports headquarters in Milan via Deruta, where it is customised with international graphics for various countries.

All signals were transported by Ei Towers from the stadium to the main direction, also via Deruta and Milan.

A Netco Sports van in the TV compound inlays the virtual mats positioned on both sides of the goals thanks to the images taken from camera one, inserting the advertising banners of the main sponsors.

Such an event involves over 25 people and the initial set up takes about four hours, considering that the stadium is fibre pre-wired.

The audio also has an important role in a game like this, where microphones are provided for each camera. However, the set up is more complex because other microphones are also engaged for audio recordings from fixed points: two on the 16-metre lines and two in the goals.

A multi-capsule Soundfield microphone takes 5.1 surround shots and adds the typical stadium reverberation from a slightly more off-centre position than in audience matches. This is to reduce the intelligibility of the words of players and coaches, which are much clearer due to the absence of fan support.

Lega Serie A provides the TV director and an assistant director who takes care of the replays.

Daniele Francini, freelance in charge as technical manager for Global Production for this event, says: “I believe that the production that Global Production chooses to use is always very commensurate with the market, the event and the period. I am convinced that taking the right steps to operate properly is very important.

“From the point of view of production, due to COVID, we had to change many things, reduce the number of hired personnel and use the largest mobile vehicles for inter-personnel distancing, constantly use medical aids, apply barriers, sanitise everything regularly and use ozonators.” 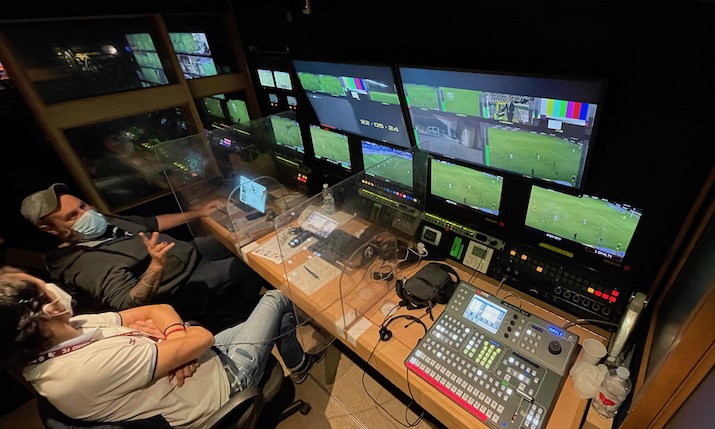 Thorough COVID protocols were followed throughout

“It is interesting to underline that, given that Global Production cares very much about the safety of its staff, even if it is not mandatory, the production crew is constantly subjected to tests carried out using molecular swabs before each meeting,” he continues.

“Over the months, EMG Group has regularly invested in staff training and intensified coaching so as to make everyone even more ready to cover even emergency tasks that are different from their usual and main ones.

“Many of us already know how to cover more than one role in production – for example, in addition to being the technical manager, I can operate as a sound engineer if necessary ­– and many know how to manage the same job on several different stages; but, in addition to this, many have voluntarily attended training sessions organised by Global Production on functions other than their primary role.