Fishing League Worldwide (FLW) is the world’s largest tournament fishing organisation, offering the largest and most prestigious fishing tournaments in the US and around the globe, and the biggest awards in the sport. 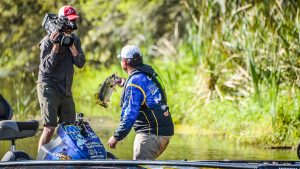 Based in Kentucky, FLW has been live streaming its national tournament weigh-ins since around 2007. In 2010 it began working with Digital P Media, a video production company based in North Carolina, to produce more content and extend its live coverage from challenging conditions, out in open water or in the middle of the countryside. Digital P Media chose Zixi in 2015 to help it pull together the coverage for FLW.

“We have partnered with FLW in producing TV shows for a long time, but over the last four years or so we have been trying to produce more high quality multi-platform content,” explained Peyote Perryman, president of Digital P Media. “Digital video delivery has become something that a lot of people ask for now.”

“2013 was the first time we started live streaming from each boat,” commented Doug Chessor, system engineer, FLW. “It wasn’t ideal as we were working with a compressed signal from the cellular network, so it wasn’t robust enough to use a shoulder mounted camera. We knew we needed a camera and mic to be in the boat with each guy. We needed to be able to encode from the camera to a cloud server with bit correction, so when it came into the studio it would feel like a natural broadcast.” 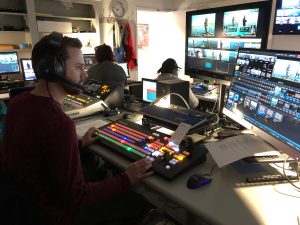 The team tried mounting GoPro cameras fixed to a cellular modem in some of the leading boats to capture more action. “This was appealing to the audience, we had a good amount of fan reaction, but the screen was like an array of security cameras; there was too much to see, people didn’t know which feed to look at,” said Perryman. “We needed to be able to curate the feeds to focus the action, so we could follow a fisherman’s story as he solved problems on the way to landing a fish.”

In 2015 Digital P Media and FLW began researching options to find a sophisticated workflow that would be able to handle a three-pronged challenge: taking in multiple feeds, working with a weaker cell signal, and a camera that could maintain good picture quality.

“We looked at LiveU, Mushroom Networks and a few others,” Perryman said. “Then we tested JVC ProHD GY-HM890 cameras which had a built-in Zixi streaming engine and it all fell into place. These two platforms worked together so seamlessly, with great pictures and a reliable signal, so it looked like the smart way to go.”

Chessor agreed: “Maintaining signal from cameras out on the water was paramount. In the past it had been very patchy, but this partnership between Zixi and JVC gave us the reliability we needed. Sometimes the cameras will move out of cellular service, but even when the signal goes down to one bar, Zixi can maintain that signal. This is where Zixi really shines; when we’re in trouble spots, it brings the most out of a low feed.”

Latency is also less of an issue than one might think, noted Perryman: “Most people would assume we’d have 30 to 40 seconds of latency, but we’re actually closer to seven to 10 seconds tops. It’s really nice that if something interesting happens on a boat, I can ask the camera operator to ask the angler a question and there isn’t a huge delay; that’s a pretty cool function. Zixi corrects the bit-packets and does it fast to keep the latency down.” 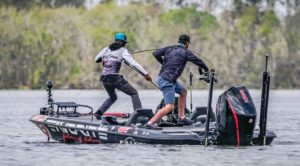 Out of FLW’s 200 US tournaments, Digital P Media covers 11 of the largest events, equating to 132 hours of live coverage, most of it on the water.

“The logistics of covering a bass fishing tournament are unlike any other sporting event,” says Perryman. “The competitors have this huge playing field, some of these lakes are 75 miles wide, and they can literally take their boats anywhere, so we have to try and cover every piece of action and build live stories across a six hour broadcast.”

Typically, Digital P Media’s work starts on day three of the tournament, once the field has been cut from 165 to 30 anglers. The cameras start recording from around 6am when the boats head out, with five JVC ProHD camera operators on the boats with the top five anglers and a live drone camera deployed to fly to any boat where a key piece of action is reported.

In addition every boat has a marshal on board, equipped with a Zixi-enabled iPad to allow them to provide a real time update of what’s happening on the boat, and to record video of catches. The GPS tracking of the iPad allows the production team back in the Kentucky studio to track each boat, so the main camera operators can be moved around to different boats as the leader board shifts. Each boat also has a GoPro mounted on the dashboard, recording throughout the day in case anything happens that the main cameras miss, and providing an additional layer of redundancy.

The six live HD feeds are sent back to the Zixi server in the studio in Kentucky, where the eight-strong production team puts together the first hour of action before the hosted live broadcast starts at 8am (local to the tournament).

“We pull the feeds from the Zixi server into a NewTek Connect Pro, which converts the Zixi signal to an NDI signal,” Peyote explains. “This then goes to a TriCaster TC1 live production system where we live-mix the show, and two NewTek 3Play systems where we can create instant replays.”

Now in the third year of using the Zixi platform, FLW and Digital P Media are unanimous in their satisfaction with the system. “With multiple reliable, high quality feeds via Zixi, we have so much flexibility to tell these exciting stories in an engaging and professional way,” said Perryman.