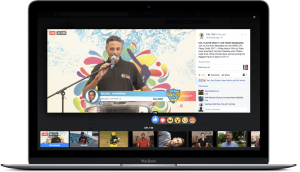 The company also recently expanded into the United States, opening an office in New York and hiring sports and entertainment executive Mike Kelley as President of the Americas. The company has already started to partner with several, prominent rights owners in the US, including BeIN Sports and Universal Music Group. Its premier client roster already includes La Liga, the English Premier League, BT Sport, Real Madrid CF, Wimbledon and Formula E Racing.

Grabyo recently partnered with the Hero Caribbean Premier League (CPL) to deliver a remote production for the live stream of the 2017 CPL Draft on Facebook Live. Using Cloud Producer various pre-recorded video segments as well as live graphics were added into the live stream on the fly. The event was streamed on the CPL’s Facebook page.

Caroline Smith, head of digital for Hero CPL, said: “The Hero Caribbean Premier League were delighted to work with Grabyo once again to create a unique, digital-first broadcast for Facebook Live. With over 2.45 million followers, we are proud of the Digital coverage we provide to our fans across the Caribbean and around the world. Using Cloud Producer to insert graphics overlays and pre-recorded VOD content in real-time helped create a top-quality and innovative live broadcast which extended the reach and appeal of the biggest party in sport to an established and new audience of followers and we look forward to building on that relationship for the months and years to come.”