Graphics, signals and post: How a new production centre is streamlining and centralising operations for Serie A 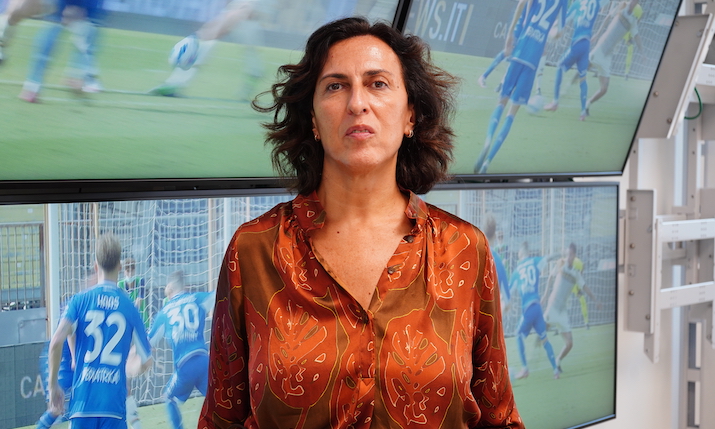 Luisella Fusco, head of media operations and broadcast Lega Serie A, in the Lissone production centre

In the second part of our interview, Luisella Fusco, head of media operations and broadcast Lega Serie A, takes us behind the scenes of the league’s new production centre and explains how it’s enabling innovation.

Read the first part of the interview here.

Tell us about some of the technical innovations made possible by the new production centre in Lissone.

“With the restart of the Italian football season, Lega Serie A has launched many innovations in partnership with EI Towers, ISG and Netco Sports (EMG Italy). In particular, in partnership with Netco Sports, Lega Serie A has decided to ‘graph’ centrally not only at the international level, as was already done, but also at the national level. So today the graphics layout is unified by the league for the main national broadcasters, namely DAZN and Sky Italia.

“The latter will continue to customise graphics to tailor the unilateral broadcasts, so for the pre-game, post-game and studio broadcasts, but for the game graphics or the official event graphics, it will take the graphics of the Lega Serie A for the first time.

“All graphics are created through Netco Sports and supervised in the dedicated graphics suites on the first floor [of the new production centre].

Are virtualised graphics also being created in this new location?

“Yes. Virtualised graphics services are packaged from here totally remotely. These are the services operated by our partner ISG, which works for Serie A and creates the virtual mats or ‘carpets’ on the door side, the centre circle and also the LED boards for almost all the clubs, except for some subjective agreements with AIM, another virtualisation partner.

“Both virtualisation partners are always hosted by Serie A in the new Lissone production centre in independent and dedicated rooms.”

How does signal transport management from the stadiums take place? Have complexities arisen due to the move to UHD?

“Twelve main signals plus 12 backups are carried (all, of course, redundant). These signals arrive in Lissone where virtualisations and graphics are inserted and then distributed nationally through fibre connections with DAZN and Sky Italia or with RAI and Mediaset for the highlights packages. They are also distributed internationally to up to five geographical areas (Italy, Europe without Italy, America, Asia, MENA and Africa) for differentiated branding.

“The diversified international distribution process has allowed us to expand the geographical areas covered. Previously we distributed only in three areas. Today we are ready to cover up to six and, above all, we have increased the graphic differentiation of regionalised branding.

“With this platform, it is possible to interact through various clients to take packaged and ready-made content, but also to access all the images and clips stored and edit new content in a personalised way.”

“Currently, we are covering the territories of the MENA with live streaming on YouTube with a selection of top matches, about five games for each game round.

“The league has also signed an agreement with Stats Perform UK which has acquired the betting streaming rights.

“Finally, with partner Hawk-Eye, from mid-October the Lega Serie A will offer an advanced tracking service in addition to the centralised tactical room service located in the stadiums and beside the already enriched statistical data offered by Stats Perform. It is called EPS Skeletal and it traces the human body on some centres of body mass; it then manages to process even more advanced statistical data because it can be customised to make a series of products enriched with data that become important for coaches, sports directors and for the media.”

Does the new centre also include areas dedicated to post-production?

“Yes, a complete post-production area has been created which is based on 24 stations to package the highlights on 16 very modern commentary booths and post-production suites. The international signal is distributed in three languages: Italian, English and Arabic, used for the live streaming service on YouTube.

“The highlights are also produced here with editing stations creating different formats ranging from two to ten minutes, also with commentary in three languages. Promotional trailers are also made in the IBC in Lissone.” 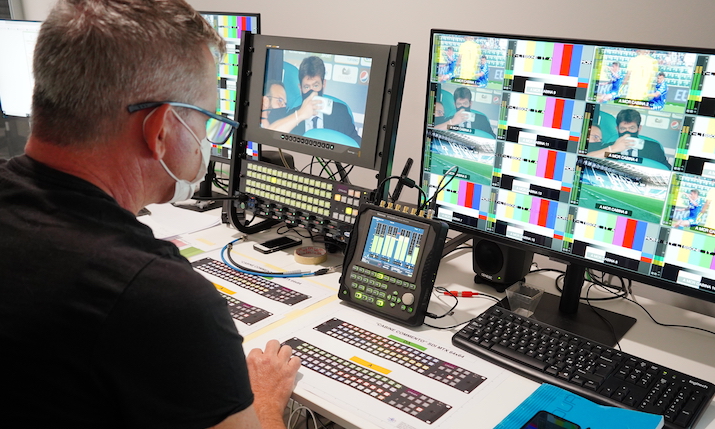 You have created a very complex centre. I guess that dealing with the management and control of all that content was not easy and some complex portals are needed?

“Of course. The content created here is distributed in a traditional way, that is via fibre with the customers who are connected, or via satellite if necessary, but also and above all through a centralised portal in the form of an advanced platform.

“With this platform, it is possible to interact through various clients to take packaged and ready-made content, but also to access all the images and clips stored and edit new content in a personalised way.

“Also in Lissone, two portals have been created. The first is used to manage planning and co-ordination, sorting and control of signals and accreditation. The second is the platform for access to images where the clubs and others approved by the League, through their own dedicated account, can access specific sections divided by destination of the products, to national and international markets, and download finished products or clips, with which to create other content. This portal is also valid for local TVs and for news rights holders.”