PRO14 Rugby and Premier Sports have announced that the first season of their partnership has been successful with subscriber figures ahead of projected targets.

As the Guinness PRO14 enters into the final round of the regular season Premier Sports has delivered on its promise to screen every minute of the action while also providing free-to-air access on FreeSports. 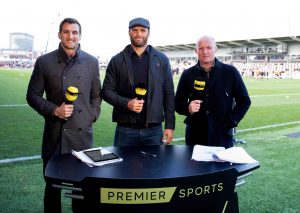 With the end stages of Guinness PRO14 season approaching ahead of the Final on May 25 in Glasgow, Premier Sports has reported unprecedented interest throughout the campaign with subscribers joining at a record pace setting an overall figure which has exceeded expectations and forecasts.

Since kicking off coverage of the Championship in August, Premier Sports has also added Autumn internationals and Under 18s Six Nations rugby to their package while it has also picked up top-tier football rights with Serie A, LaLiga, Scottish Cup, MLS and Eredivisie available to customers.

Premier Sports has raised the game for Guinness PRO14 fans this season with delivery of a dedicated highlights programme with 17-minute edits of each game available every Sunday; The PRO14 Hour, co-produced with eir sport, has provided fans with a dedicated magazine and review show on Wednesday nights; and The Premier Player app and desktop site allowing supporters to watch games on their terms.

Martin Anayi, PRO14 Rugby CEO, said: “from the very beginning we knew that Premier Sports understood our vision for what the Guinness PRO14 should be and their commitment to delivering every game live has been rewarded by the interest from supporters all across the UK.

“The production standards have been raised across the board with dedicated pre and post-match analysis from players and coaches who know what it takes to win at the highest level. Our clubs are now getting more consistent exposure and interest in the Championship continues to rise.

“To see Premier Sports adding properties such as LaLiga and Serie A is a welcome boost and it’s terrific to see stars of the Guinness PRO14 billboarded alongside faces like Ronaldo and Messi. The competition in our Championship this season has been really intense and with tries being scored in record numbers it’s great that whether our fans our watching live, on-demand or checking out the highlights programming they’ll never miss a score.”

Richard Sweeney, CEO of Premier Sports said: “We’ve been blown away about the partnership we’ve built with Guinness PRO14 in our first season both in terms of our coverage and by the growth of our customer base, with subscriptions ahead of target. We are pleased to be working closely with a world-class production team at Sunset+Vine with the expertise and know-how required to deliver high quality live coverage of seven games every weekend throughout the Championship.

“We’ve brought together great rugby talent across Wales, Scotland and Northern Ireland for our coverage, believing that if you invest in the right people, you show you’re really serious about providing rugby coverage that customers enjoy.

“We’ve had great feedback from the clubs, PRO14 Rugby and supporters this season, particularly around the opportunity to access so much rugby action, all in one place. Never before has the Guinness PRO14 had such comprehensive coverage and a platform to show every game live.”

Premier Sports coverage of the Guinness PRO14 has been powered by the production expertise of Sunset+Vine who have assembled an on-air cast of 20-plus experienced commentators and presenters – bringing together some of the brightest broadcast talent and former players and coaches with international pedigree.