The UCI Track Cycling World Championships in Paris last week broke new technical ground as HBS, with the help of Broadcast RF, brought on-board camera technology to the world of track cycling. “It was very successful and loved by the broadcasters and fans in the stadium,” says Dan Miodownik, HBS, head of production. 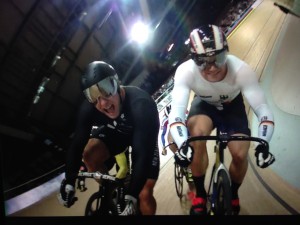 Broadcast RF and HBS worked together to bring on-board cameras to track cycling.

The system, designed by Broadcast RF and named the VeluVue, was built specifically for track cycling and places the camera underneath the saddle to provide a view that looks behind the rider.

The system includes a broadcast-quality HD transmitter, lens, and camera, and weighs just 195 grams. Once it is mounted on the cycle the total weight is just over 220 grams.

“The initial weight was 400 grams,” says Miodownik of a design process that involved not only shrinking the weight but also making it as safe and aerodynamic as possible.

“Putting the camera on the front can pose a danger if there is an incident and also by having at the back we remove some aerodynamic issues,” he adds.

After early tests proved positive Miodownik says directors were “over the moon” and saw a lot of potential for the system. 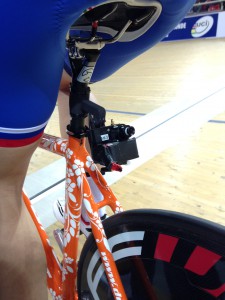 The on-board cameras were mounted under the saddle.

“It’s a very dynamic shot and it can go from a wide shot to a close, tight shot,” he adds. “But you need to be really careful that the shot is not disorienting so you need to slowly introduce the angle to the audience.”

For a video captured by the on-board cameras please click here.

The rest of the production was the typical high-quality production one could expect from HBS and EuroMedia, which provided the OB and technical facilities. Thirteen Sony HD cameras (including two handheld super slo-mo units) were used alongside the four-onboard cameras and the production crew numbered 25 while 47 technical crew was involved. The executive producer was Julien Bertin, race director was Steve Docherty, and project manager was Rebekka Ahlstrom.

The use of on-board cameras for the cycling championships opens the door on their potential use for a large number of other cycling events. Most importantly the rear view provided great and compelling images and also did not interfere with the racing which can often come down to thousandths of a second.